No one likes doing chores, but when there’s a treat at the end it’s slightly more bearable.

One dad seems to be getting seriously lucky every time he completes a house chore.

Posting on an open forum on Reddit, an anonymous American woman, revealed how she’s been thanking her husband for helping out.

Similar to a sticker chart where you give pocket money to a child, this couple’s version takes a slightly more X-rated turn.

“Lovely to have explain to the kids what a BJ means”

Her husband must complete each task six times, racking up six Disney princess stickers – to reap his personalised rewards.

For example – according to the chart – if he changes a “blowout diaper” six times, he’ll receive a cheeky naked hula dance from his wife.

And if he regularly vacuums the children’s car seats, then he doesn’t have to attend their child’s friend’s birthday party.

The chart then gets a little bit more racier as the wife has promised her husband oral sex if he cleans up the children’s vomit. 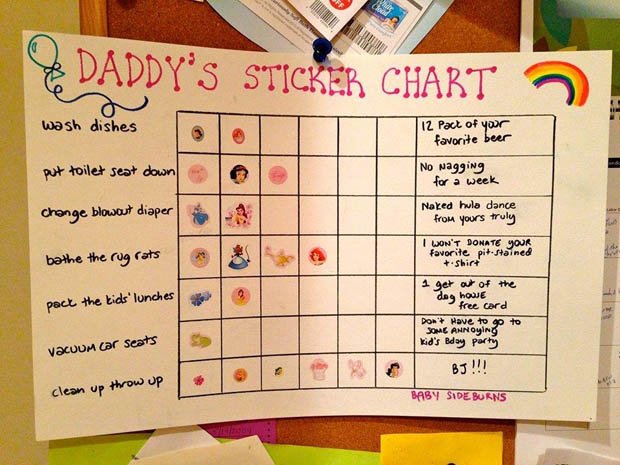 Another added: “You don’t get a prize for taking care of your own kids. Does mum get a chart? What are her prizes?”

However, not everyone was against the idea as one Reddit user, who posted on the thread, found it hilarious.

They wrote: “I have no idea why anyone would be offended by this. It’s between a wife and husband, it’s a form of roleplaying.

“Obviously the wife enjoys or she wouldn’t of made [it].”

Coronavirus protection: Do N95 masks work? Should I wear a face mask amid outbreak?

High blood pressure: Best meat to include in your diet if you want to lower your reading

How to live longer: Five habits you need to eliminate to increase your life expectancy