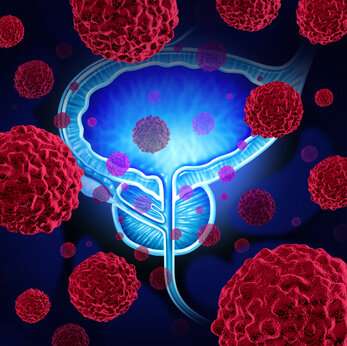 Prostate cancer is caused by elevated hormone levels, and tumors are generally treated using hormone therapy. However, after some time, tumor growth is no longer dependent on hormones, which results in resistance to treatment. As a result, new types of treatments are urgently needed. A research team headed by Lukas Kenner of the Department of Pathology at MedUni Vienna in collaboration with David Heery from the University of Nottingham/UK and Sarka Pospisilova and Suzanne Turner of the University of Brno/Czech Republic have shown that the protein µ-crystallin (CRYM) plays a significant part in tumor growth. Their findings were based on genetic analysis of numerous tissue samples. The higher the levels of this protein that are present, the better the prognosis. The study was published in the International Journal of Cancer, a leading journal.

Prostate cancer is one of the most commonly diagnosed forms of cancer in men and affects around 5,600 men in Austria each year. Hormone therapy is one of the core treatment strategies, but it is only effective for a certain period of time. It has been known for some time that the thyroid hormone T3 potentially plays a part in the development of prostate tumors, but until now the question of how it does so has remained unanswered.

A research team led by Lukas Kenner of the Department of Pathology at MedUni Vienna in collaboration with David Heery from the University of Nottingham/UK and Sarka Pospisilova and Suzanne Turner of the University the University of Brno/Czech Republic has now shown that the protein CRYM binds to the hormone T3 and inhibits tumor growth. The findings were based on an analysis of protein molecules in tissue sections and genetic data from hundreds of prostate cancer patients. According to lead author Lukas Kenner, a member of the Comprehensive Cancer Center established by MedUni Vienna and Vienna General Hospital (AKH): “Our work shows that CRYM is a key regulator of T3 metabolism and is also closely linked with androgen metabolism. The more advanced the disease, the lower the levels of CRYM found in the tumor tissue.” Low CRYM levels are associated with a poor prognosis. CRYM also blocks cells’ absorption of choline, which is a vital component in the formation of cell membranes. As tumors are characterized by rapid cell division and therefore require lots of new cell membranes, CRYM can inhibit tumor growth by impeding the uptake of choline.