It’s summer, which means it’s time to stand in front of a flaming grill while flipping burgers, toasting buns, and browning veggies. And then, of course, digging into that fire-roasted deliciousness.

But not so fast, partner. Becoming a guardian of the grill requires some serious know-how. Start by shopping at ALDI to up your grilling game with affordable, high-quality foods that are fun to grill and eat in the warm-weather months. Then, see the expert tips below so you can learn the laws of resting your meat and secure lesser-known skills, like when to wield a cast-iron skillet and set aside the spatula. 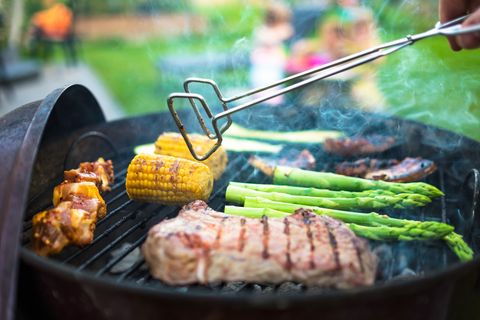 For starters, different types of grills perform in different ways. Charcoal, for example, has a tendency for having inconsistent heat. So become familiar with the grill’s hotspots and focus on those. “Use the edge of the grill to cook proteins or finish delicate dishes like salmon,” says Armen Ayvazyan, Executive Chef at The Hollywood Roosevelt Hotel’s new steakhouse The Barish. “The lower temperatures help render out fat from the skin and get it crispy, at the same time gently cooking the protein.”

A gas grill is super consistent and allows for the user to control the heat. Want a dark, all-over, more even sear on that rib eye? Gas will do that for you.

Whether it’s impatience or inexperience, a common open-flame faux pas is not letting your grill heat up long enough. Preheat it for 15 to 20 minutes before you lay anything down on that heated grate.

“One of the greatest health risks with grilling is exposing foods, especially meats, to direct high heats that lead to charring,” says registered dietitian Matthew Kadey. Kadey says he puts a cast iron skillet on his grill as a barrier between food and flame. “It still gives a lot of the same great flavor but minus the dangerous char.” So, remember: skillet, don’t char it.

Lay down the spatula

Giving too much TLC to the edible objects of our grilling affections is enticing, but keep your hands off the spatula. Being overly zealous with flipping your burgers, bratwurst, and steak won’t allow the meat to cook evenly. Also, letting them be will allow for the meat (or veggies) to caramelize, which really adds extra flavor. And whatever you do, don’t press down with your spatula unless you want release and, in effect, lose all those tasty juices in the meat. 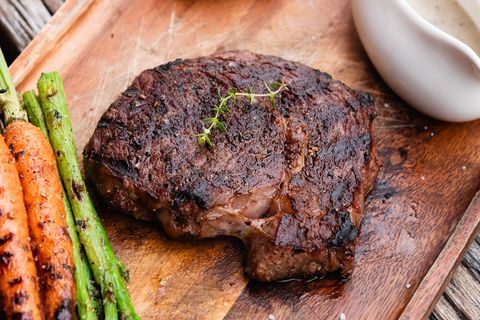 You’ve chosen a high-quality steak from, say, ALDI. You’ve marinated it. You carefully put it on the grill and gave it all the necessary attentiveness to produce a grilled morsel for the gods. But then you served it immediately. Insert a record scratch from the heavens above. All your hard work was just in vain. Take a tip from world-famous steakhouse chefs: let a piece of meat rest for about 10 minutes between the grill and the serving plate.

Want to take things a tad (or, in this case, pad) further? “Rest the meat in butter,” says Isaac Toups, Chef/Owner of Toups Meatery, a modern Cajun restaurant in New Orleans. “It gives the food an extra dose of fat and flavor.”

Bonus: go plant-based for the afternoon

Looking for a few plant-based recos for your next cookout this summer? ALDI sells an exclusive line of Earth Grown products, vegan and vegetarian alternatives that even a carnivore can love. Give them a go. The black bean chipotle burger will earn you some plant-based respect around the picnic table this summer.