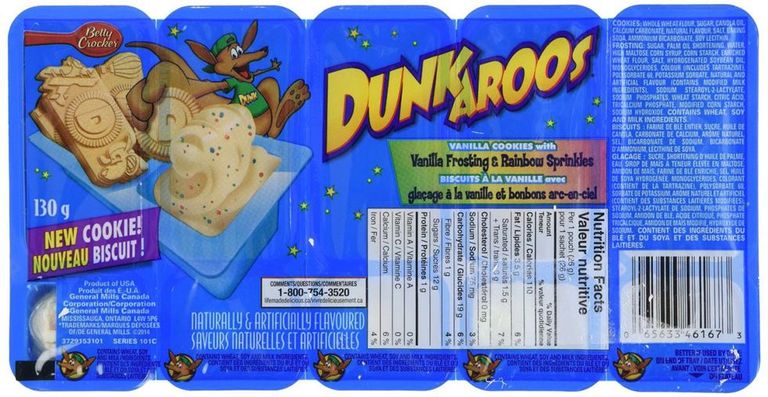 To talk about Dunkaroos with the appropriate amount of passion, you’ve got to channel elderly Rose from Titanic, and croak: “It’s been six years …”. The dip-and-eat cookies only ended production in the U.S. half a dozen years ago, but people refer to Dunkaroos — which reached their heyday in the ’90s — like they’ve been gone forever. Walmart has tried to make a knock-off version and you can buy the real things on Amazon from Canadian sources, but nothing beats rolling up to the grocery store and stocking up in person.

As if that’s not enough to really rile you up, we just found this out: Dunkaroos are still alive and well in Australia — and they come in a flavor we’ve never seen before. Classic Dunkaroos came with either rainbow sprinkle or chocolate frosting, but Down Under, they’re made with a chocolate-hazelnut spread, too.

Nope… you’re not seeing things.. Chocolate Hazelnut Dunkeroos from Australia. ? Just received another swap box from my buddy @defensive_wounds_band and these beauties were included. Have great memories of Dunkeroos growing up. ❤️ Made by Nestle Australia the crackers are shaped like kangaroos and the chocolate dip is made with real hazelnuts. These are awesome ? yea sure I could dip animal crackers in chocolate hazelnut cream but that’s not nearly as fun as a Dunkaroo. “ Roo shaped… hop into ‘em “ ? I’ll post a pic of my entire swap box soon. Thanks Clint ???? ?????. #nestleaustralia #nestle #nestlestarz #nestledunkaroos #dunkaroos #chocolatehazelnut #chocolatehazelnutdunkaroos #hopintoem #rooshaped #australia #nestlestarzdunkaroos #hazelnut #junkfood #swapbuddies #precious #kangaroo #bringbackdunkaroos #thanksclintyourock

According to an Instagram post from user @JunkFoodMom, the cookies are shaped like kangaroos and the dip is made with real hazelnuts. It’s basically the Nutella mash-up we never knew we needed. No enterprising Aussies have made the Dunkaroos available on Amazon yet, but The Australian Food Shop — which ships to the U.S., has them for sale. A six-pack costs $11, plus a little more than $25 in shipping costs. (Pro tip: Shipping is calculate by weight, and anything under two kilograms — about four and a half pounds — is priced at the same rate. We added nine boxes of Dunkaroos to our cart before the shipping rate increased.)

Or you could just sell all your earthly possessions and hightail it to Australia to start a new life. It might be cheaper than regular Dunkaroos shipments.