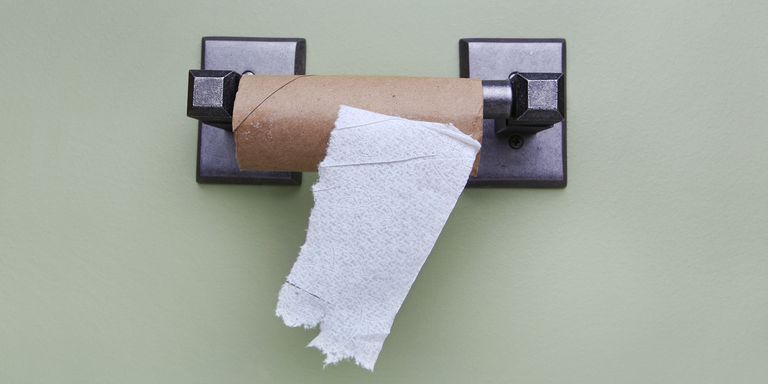 Let’s not tiptoe around this: Being constipated is miserable—the pain, the bloating, the feeling that you can’t possibly fit anything else into your stomach.

Luckily, you’re not alone (misery loves company, right?). About 16 percent of adults have symptoms of constipation—and women are more likely to have it than men, according to the National Institute of Diabetes and Digestive and Kidney Diseases.

Just so I’m clear, what is constipation?

Constipation is when your bowel movements, (a.k.a. poop) are hard and lumpy, painful or difficult to pass, and/or you’re unable to go more than three days a week, says David Poppers, M.D., Ph.D., clinical associate professor of medicine in the Division of Gastroenterology at NYU School of Medicine and NYU Langone Health.

And while it’s not medically important to have a bowel movement every single day, it can still be pretty damn uncomfortable if you don’t.

The hardest part of constipation is when the motion-sensor bathroom lights turn off on you.

To do that, you’ve got to know what’s causing your constipation in the first place (literally so many things). Here are a few common constipation culprits—and how to remedy them to make things move a little more smoothly down there.

travel is overrated ; all I ever get on the road is constipation

When you’re about to jet off somewhere, the last thing you want to have to think about is if your upcoming dietary changes will wreak havoc on your digestive system.

“When someone goes on vacation and eats things they’re not accustomed to, that can lead to a change in bowel habits,” says Jordan Karlitz, M.D., a board-certified gastroenterologist and a member of the American College of Gastroenterology.

There’s a quick remedy to this: Try to eat as close to normal as possible on vacation. “If you know you’re going on a trip, but you eat a fiber-fortified cereal every morning, or something of that nature, consider taking some along with you,” says Karlitz. Boring? You bet. But it’s better than being miserable while traveling.

2. You’ve fallen off the exercise wagon.

“I’ve seen many patients who are on a consistent exercise schedule and become constipated when they stop,” says Karlitz. “Changing what your body is used to can affect various systems in your body, including making your intestines process food differently.”

Stress makes me constipated and constipation makes me stressed. ??

“In my experience, patients can have irregular bowel habits because of stress,” says Karlitz. That’s due to your enteric nervous system (essentially, the nervous system in your gut that controls gastrointestinal behavior).

Stress or lack of sleep (or both, since they are so often linked) can influence your enteric nervous system, which can make you backed up.

If you just had surgery or you’re on long-term pain medication, this might be causing you to feel stopped up. “If you’re on pain medication like opioids or narcotics, that’s an extremely common cause for constipation,” says Karlitz.

Popping a few ibuprofen for soreness shouldn’t affect your regularity, though. If you’re having this issue, talk to your doctor to see if they can prescribe a stool softener to take in conjunction with your meds.

Good hydration may be the key to easing your constipation—and it’s especially important to be sure you’re getting plenty of liquids if you’re eating a high-fiber diet. “Fiber is only effective if you have enough liquid in your diet,” says Poppers.

Coffee and other caffeinated beverages, however, don’t count, says Poppers. While they improve motility (#coffeepoops), they’re dehydrating. So are alcoholic beverages—so make sure to alternate between boozy drinks and glasses of water during nights out.

6. Your thyroid is out of whack.

“If various constipation causes have been ruled out, an internist may check to see if your thyroid function is normal,” says Karlitz.

Hypothyroidism, a condition brought on by an underactive thyroid gland, might be the culprit, says Karlitz. A properly functioning thyroid releases hormones that are linked to various processes in your body, including your digestive system. Without enough of these vital hormones, your intestines may weaken and slow down, causing constipation.

Although many women experience constipation early on in pregnancy, some deal with it for most of (if not all of) the nine months. “There are so many changes to hormones and diet, plus stress’s effect on the enteric system can come into play,” says Karlitz.

If you’re pregnant and feeling particularly blocked, keep track of when you’re feeling the worst: Is it after gobbling down cheese pizza, or the nightly bowl of ice cream you’re eating in the name of getting more calcium? If so, consider cutting those out (or at least cutting way back on them).

Constipation caused by pregnancy is a real deal. I question every time if I’m pushing out my baby orrrrrr

Avoiding constipation-triggering foods can help keep you comfortable throughout your pregnancy, but talk to your doctor too, to be sure you’re getting key nutrients (like calcium).

If your constipation is persistent and accompanied by pain, head to a gastroenterologist. They may diagnose you with a digestive disorder like irritable bowel syndrome.

“IBS is a very common disorder that can be either diarrhea predominant or constipation predominant,” says Kartliz. “That can lead to chronic periods of time where you aren’t going to the bathroom normally.”

If you suspect you have IBS, don’t try every OTC remedy on the shelves; instead, head to a doctor who specializes in gastroenterology. They can get to the root of the problem sooner and create a treatment plan to manage your symptoms.

Don’t resist the urge to poop–seriously. In fact, it’s healthy to have a bowel movement at about the same time (or times) every day.

“Some research suggests that people who use the bathroom at timed intervals and don’t fight the urge to have a bowel movement tend to have more regular bowel movements,” says Poppers. So, if you gotta go, then go

Women who have an eating disorder may limit fiber-rich foods that make them feel full, or beverages, in an effort to cut calories. Doing this can wreak havoc on the digestive system, says Poppers.

Those who suffer from disordered eating may also overuse or misuse certain types of laxatives, which some experts believe can lead to constipation; though more research is needed on laxative use and constipation, says Popper.

“Some antacids—the ones that have more aluminum and calcium—are the most constipating,” says Poppers says. Though many other drugs can increase your risk of constipation too, like medications used for depression and supplements for iron deficiency.

If you’re taking medication and/or supplements, talk with your doctor who can help adjust the doses and recommend dietary and beverage changes to treat constipation.

12. You have nerve issues in your rectum or colon.

“There’s a whole area of study we call gut motility—how fast things are propelled through the gastrointestinal system,” says Poppers.

Conditions that affect the nervous system, including multiple sclerosis and Parkinsons, can alter motility in the digestive tract, he explains. Or, a defecatory disorder may be to blame, says Poppers. “[It] has to do with the sphincter’s ability to relax and allow poop to come out,” says Poppers.

The fix for most bouts of constipation is simple: eat healthy, drink lots of water, and get your 25 grams of fiber daily. And make sure to get it from diverse sources—fiber comes in two forms: soluble fiber, which dissolves in water (think: oats, apples, and beans), and insoluble fiber (think: wheat, broccoli, and dark leafy vegetables). Most people need a mix of both to keep everything running smoothly.

But if you’re dealing with prolonged constipation, skip OTC treatments from the drugstore. “There are various laxatives that you can buy, but if this becomes a lasting issue, it’s really best to see a physician to make sure everything’s all right,” says Karlitz.

On that note, curb any constipation embarrassment you might have. “Your quality of life can really be improved if you have it addressed and often implement simple changes,” says Poppers.