Man, 57, narrowly escapes death after 3 days of constipation: Doctors reveal it caused him to have a build-up of 2 LITRES of faeces

A 57-year-old man narrowly escaped death after not being able to go to the toilet for three days.

Doctors in Australia saved the unnamed patient’s life by extracting around two litres of faeces from his colon.

His colossal build-up of waste caused him to develop the life-threatening abdominal compartment syndrome – increased pressure in the stomach.

And he was left unable to use his right leg, which turned cold after the bulk of faeces cut off his blood supply, and suffered kidney damage.

Scans of his colon show exactly how much waste, known as faceal impaction, the man collected over the three days. 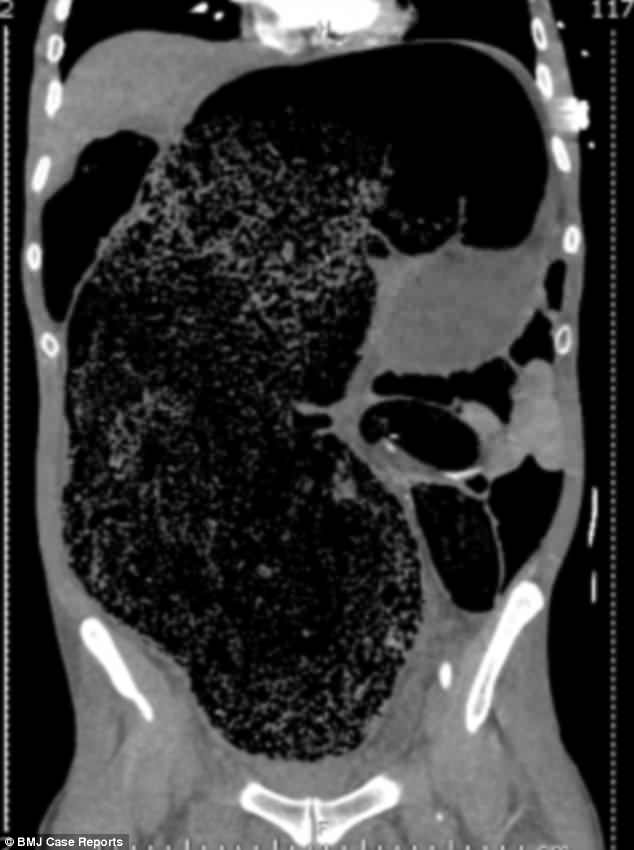 The bizarre tale, uncovered by specialists in Victoria, prompted intrigue and was published in the BMJ Case Reports.

They also urged medics to consider ACS as a potential cause of acute lower limb ischaemia – a restriction in blood supply to the legs and feet.

The man sought help at Footscray Hospital after his stomach pain worsened and he experienced nausea and ‘absolute’ constipation.

In the report, he also told emergency medics that he had experienced abdominal distension – when the stomach expands because of a build-up of substance.

Doctors were baffled as the man had also been unable to use his right leg for the past 24 hours, and complained it was painful.

Upon closer inspection, the team led by Dr Simon Ho found his limb was cold to touch and they struggled to locate a pulse in it.

WHAT IS FAECAL IMPACTION?

Faecal impaction, where faeces has built-up in the rectum, can sometimes lead to a number of other complications, including:

Faecal impaction is usually treated with laxative medication, although suppositories (medication inserted into the anus) and mini enemas (where medicine in fluid form is injected through your anus) may sometimes be used.

Medics decided to perform a rectal examination, which showed impacted stool – a solid bulk of faeces, caused by constipation.

They diagnosed ACS, and further tests showed evidence of renal impairment and metabolic acidosis – when the kidneys aren’t removing enough acid from the body.

A CT scan revealed a grossly distended sigmoid colon – the S-shaped part of the large intestine, which leads into the rectum.

The build-up of faeces had resulted in the blockage of the man’s right common iliac artery – which supplies blood to the legs.

The patient was immediately taken to theatre, where surgeons manually removed two litres of faeces from his colon.

After the build-up was removed, blood flow returned to the patient’s leg and doctors were able to locate a pulse again.

Surgeons rushed the patient to intensive care after the procedure, because of his multi-organ dysfunction and metabolic acidosis.

Doctors gave him constipation drugs – and he was discharged from intensive care after 4 days. It took him 13 days before he could walk again without assistance.

He was eventually allowed to leave hospital more than three weeks after he first arrived, and was given a course of drugs to relieve constipation.

No explanation has been found as yet to explain his significant faecal loading and constipation.