How a single scratch on a nonstick pan can release MILLIONS of toxic micro-plastic particles into your food, study warns

A single-scratch on the surface of non-stick pans can unload millions of microplastics into food and homes, a shock study suggests.

An Australian study – which used light-waves to measure microscopic particles – found just one crack on a Teflon-coated pan released an explosion of tiny toxins.

Per-and polyfluorinated substances (PFAS), also known as forever chemicals, are stick and heat-proof particles used to make millions of kitchenware in the US.

In recent years they have been linked to a host of health problems including multiple types of cancer, autism and infertility.

They are so abundant that a 2020 study found that 99 per cent of Americans have some detectable levels of it in their blood stream.

Researchers found just one 5cm scratch to Teflon pans – perhaps from a spatula or spoon – released up to 2.3million microplastics.

Overall, more than 9,000 plastic particles were dispersed within the pan.

Despite these risks, there are no existing federal regulations in the US on the mount of PFAS that are allowed to be on the surface of manufactured goods. 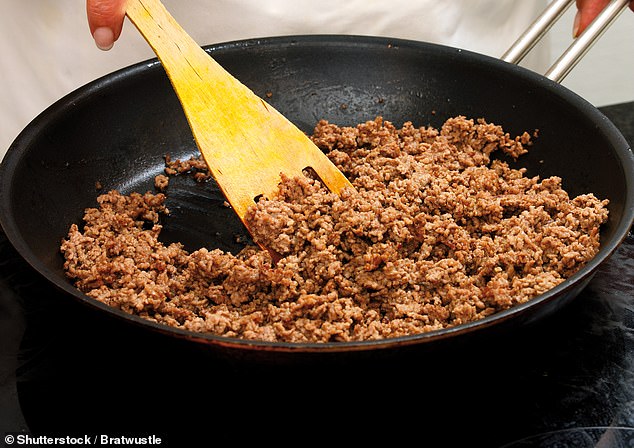 ‘Given the fact PFAS is a big concern, these Teflon microparticles in our food might be a health concern so needs investigating because we don’t know much about these emerging contaminants,’ said Dr Cheng Fang, a senior research fellow at the University of Newcastle in Australia.

Researchers, who published their findings in Science of The Total Environment, used Raman imaging to study the prevalence of particles coming off of the pans.

The technique involves using light waves to monitor how particles spread and interact with one another in a certain space.

Using microscopic imagery, the light waves can track how many particles there are and how they move around the space.

Toxic forever chemicals linked to cancer and autism are found in EVERY baby toy, clothing and bedding tested in new study

Toxic ‘forever chemicals’ linked to a slew of diseases and disorders have been discovered in every baby product sampled in a new study.

PFAS are a common ingredient in clothing and other household items because they are durable and can repel grease, water, stains and heat.

But the scientists warned sometimes they can wear off as dust and are then inhaled by youngsters. They are also durable, and can stay in the environment for long periods of time.

The chemicals have been linked to an increased risk of cancer, birth defects, autism and infertility.

Sydney Evans, an analyst at EWG and author of the study, told DailyMail.com the risks from them ‘far outweighs any sort of stain proofing’.

The EWG, a Washington, D.C.-based advocacy organization commissioned a series of independent lab tests on the products.

The research initially looked at levels of fluorine in the items, a chemical element used to make plastics which can cause teeth decay, osteoporosis and harm to kidneys, bones, nerves and muscles.

Researchers then tested the 10 items with the highest levels of fluorine for PFAS.

The 10 products were all children products that included Sealy and Graco bedding, bibs manufactured by Bumkins and Hudson, UGG boots, a Columbia jacket, a bucket hat and pajamas made by Carters and a snack bag also made by Bumkin.

Millions of these particles were expelled across the pan, allowing them to get into food cooked on the dish.

Once a person eats food contaminated with PFAS chemicals they will remain in the body for long periods of time, as it very slowly leaves through urine.

The Food and Drug Administration (FDA) has not set an upper limit as to a maximum amount of PFAS that is safe to consume in food.

In lieu of FDA regulations, researchers recommend people to take more care in the types of products they choose to use.

Experts recommend against using non-stick pans, especially those that use Teflon products.

‘It gives us a strong warning that we must be careful about selecting and using cooking utensils to avoid food contamination,’ Professor Youhong Tang, a researchers from Australia’s Flinders University said.

‘More research is recommended to address the risk assessment of the Teflon microplastics and nanoplastics, given that Teflon is a family member of PFAS.’

Teflon is an manufacturing giant that makes much of the non-stick cookware Americans use today.

Its non-stick coating uses a chemical called polytetrafluoroethylene (PFTE), which is a type of PFAS.

There is no data that shows it is either more or less dangerous than other types of PFAS.

Experts worry that the prevalence of these chemicals in dishes, food packaging and other goods are needlessly exposing Americans to these dangerous chemicals.

Researchers warn that exposure to ‘forever chemicals’ in youth can affect a child’s social and physical development, and impact behavior as they get older.

A University of Texas study last year found that children exposed to PFAS in the womb were more likely to develop autism.

The Environmental Protection Agency (EPA) recommended in guidance issued in July that its levels should not exceed 0.004 parts per trillion (ppt) in drinking water.

Several states — including Maine — have also moved to ban its use in products including clothing and bedding.

Some fear that these dangerous chemicals are so prevalent in American life that they are entirely unavoidable.

Sydney Evans, an analyst at the Washington DC-base advocacy firm the Environmental Working Group, told DailyMail.com that: ‘It’s really hard to shop your way out if [PFAS exposure].’

‘You can get rid of [one product], but the thing you replace it with will also have PFAS.’