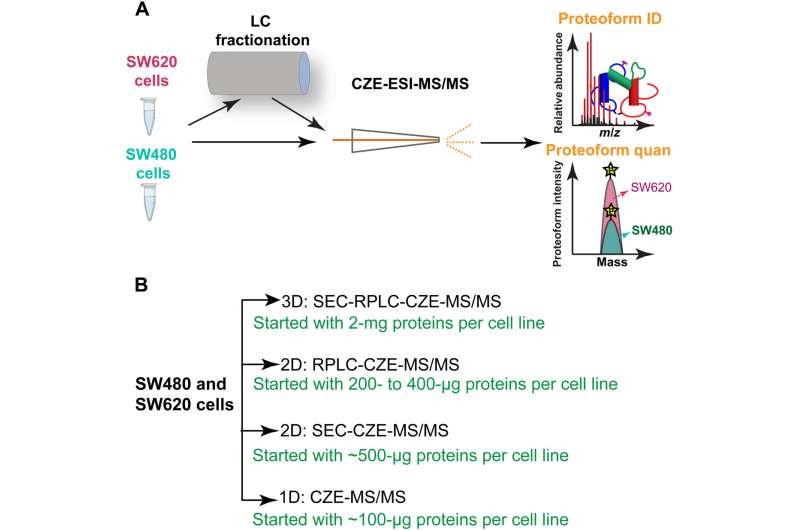 In their paper published in the journal Science Advances, the group describes how they used TopPIC analytical software and electrophoresis-tandem mass spectrometry to analyze proteins in cell lines from colorectal cancer cells and what they found by doing so.

Prior research has shown that it is not generally the development of cancerous tumors that is problematic with cancer; rather, it is when they metastasize that serious problems occur. And because of that, medical researchers have been looking for markers that can be checked to determine if a given patient has not only a given type of cancer but whether it has metastasized.

In this new effort, the researchers have developed and carried out a top-down approach to studying proteins associated with the development of both metastatic and non-metastatic colorectal cancer and their possible use as markers for the disease.

The work by the researchers involved analyzing thousands of proteins and proteoforms (a specific type of protein) using a software product called TopPIC looking for associations with colorectal cancer. They also conducted mass spectrometry studies with the same goal in mind. The unique approach used by the team allowed them to directly measure proteofoms that were still intact, which allowed for study of their specific functions.

In all, the team analyzed 23,622 proteoforms and 2,332 proteins and in so doing found they were able to pinpoint variants that could be used to distinguish metastatic forms of colorectal cancer. They were also able to identify approximately 17,300 proteoforms associated with non-metastatic colorectal cancers. The researchers also found that both cell lines had proteoforms that corresponded to certain types of signaling and enzymes.

The researchers conclude by suggesting that their work clearly demonstrated that cell lines from metastatic and non-metastatic colorectal cancers have very different proteoform profiles. Such profiles, they further suggest, could represent biomarkers that might someday soon be looked for in new types of tests developed to target them, as part of testing for colorectal cancer.