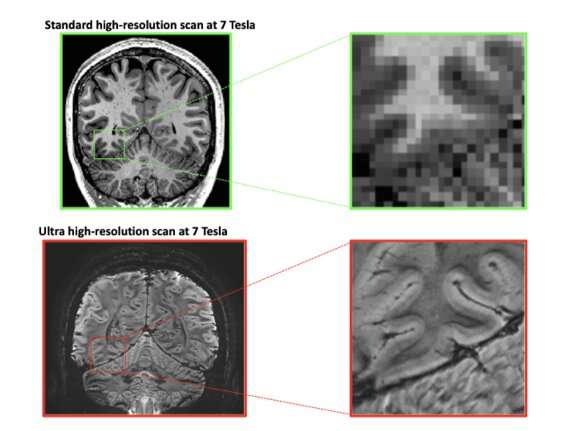 Object recognition and facial recognition may seem like similar abilities, but new research finds that these behaviors are on the opposite ends of the spectrum when it comes to physical signatures in the brain.

According to a new study, published by a team of scientists at Vanderbilt, both recognition abilities are associated with the same area of the brain—the cortex—but are characterized by different depths of cortical layers—which, like tree rings, form at the age at which each ability was acquired.

The research—the first to uncover the ability to predict strength of cognitive function based on cortical layer structure—appears in the Journal of Cognitive Neuroscience.

“Our paper is novel in that we examine the formation and structure of specific layers of a cortical area known as the fusiform face area, and its relationship to unique cognitive functions,” said Isabel Gauthier, David K. Wilson Professor of Psychology and director of the Object Perception Lab at Vanderbilt. “As a result of both our theoretical and imaging work, we can report evidence of a newfound ability to predict facial and object recognition abilities based on the depth of these layers.”

In particular, the outer layers of the cortex may shrink over time and do so more in some people than others, thanks to processes in the brain that cause the connections to other brain areas to be pruned during early development. As such, skills like facial recognition are associated with thinner outer cortical layer, since humans begin learning faces in early childhood and a lot of pruning may result in the best connections in adults.

Meanwhile, object recognition (the researchers used cars in this study) is associated with a thicker fusiform face area, for all layers of the cortex. This is because we learn these objects later in life, and the mechanisms that support this learning is not specific to any one layer.

Using ultra high-resolution MRI technology, the team also achieved a first for medical imaging. Using a powerful 7-Tesla magnet, the team conducted meticulous scans of deep, middle and superficial cortical layers in 14 adult male individuals during the study, and combined the averages of their scans for high-definition images with clear outlines of brain layers.

“There is no precedent for the imaging and measurement work done by our team of researchers on this study,” said Rankin McGugin, research assistant professor of psychology in the Object Perception Lab at Vanderbilt and co-lead author on the study together with Allen Newton, research assistant professor of radiology and radiological sciences also at Vanderbilt. “As our brain imaging techniques continue to improve and we can achieve this sort of resolution in all of the brain at once, we will run larger studies, to better describe how other visual abilities relate to brain structure more generally.”