Home » Health News » Alexandria Ocasio-Cortez said she’s thought about freezing her eggs: ‘We have to make these choices that men simply don’t have to make’ 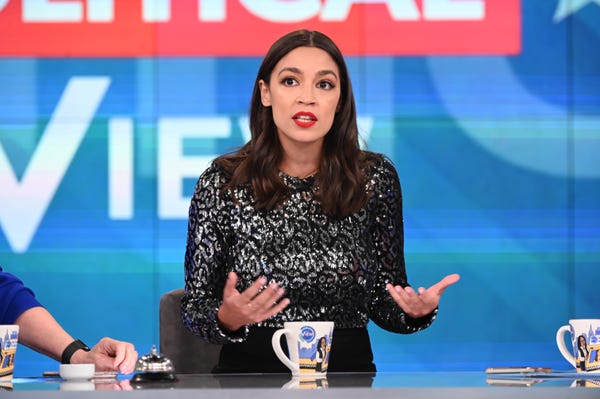 Representative Alexandria Ocasio-Cortez is in her prime politically. But at age 31, she's also facing the reality of having to balance her political ambitions with a desire to have a family.

"I'm sitting here, I'm like, Do I freeze my eggs? Can I afford to do that?" AOC said in an interview with Vanity Fair. "My orthodontist was telling me about how she was doing IVF, and I'm, like, asking her what her experience is like."

This year the congresswoman got a dog "to force myself to not live and breathe work," but she said she knows that it's not the right time for a baby, despite having Congresswoman Tammy Duckworth — the first woman to give birth in office — to look up to. So AOC is being realistic about her options.

"It's important for us to talk about it, because women, we have to make these choices that men simply don't have to make," she said.

AOC is far from alone in thinking about egg freezing

Womens' fertility starts to decline right around the age of 30, and the decline is steep after the age of 35, according to The American College of Obstetricians and Gynecologists. This often leaves women trying to balance their desires for a career and a family.

Because of that, more people are freezing their eggs, a process known as oocyte cryopreservation. Younger eggs are generally healthier and more plentiful, making it easier to get pregnant and deliver a healthy baby. Conception gets harder as women age, and genetic conditions like down syndrome become more common. Getting pregnant with younger eggs can combat those complications.

Egg freezing was 10 times more common in 2018 than it was in 2009, and the pandemic may have further accelerated the trend: James Grifo, Program Director at NYU Langone Prelude Fertility Center told Yahoo that egg freezing increased 41% in June-September 2020 compared to the same period in 2019.

During the pandemic, with more time at home, some people were able to "squeeze in" the procedure, which could account for the jump in egg freezing, Grifo said.

How effective is egg freezing?

Samir E. Hage, an OB/GYN with Redlands Community Hospital in Redlands, California, told Insider that women who are interested in having children later in life should consider freezing their eggs sooner rather than later.

"Success is determined by the age at the time the egg was frozen," he said. "The younger the egg, the higher the success."

Most women should freeze their eggs by 35, he said. With frozen eggs, women can become pregnant up till age 54, or opt to use a surrogate to carry their biological child, he added.

However, freezing eggs isn't a sure bet. Grifo said that the rates of live birth are similar for frozen eggs and eggs freshly retrieved during an IVF cycle. Some data from Yale Medicine suggests that only 3 to 9% of women will have a live birth after using frozen eggs. Typically, IVF has a success rate of about 50%.

Hage recommends that women freeze fertilized embryos, rather than just eggs. That can be done with a partner's sperm or donated sperm.

"Don't rely on eggs," he said. "Eggs don't survive as well as embryos when thawed."

In addition, unlike eggs, embryos can be tested for genetic conditions that might cause a pregnancy to be non-viable.

The cost of freezing eggs

In addition to the medical process, cost is a major barrier for many women who are interested in freezing their eggs. It can cost $6,000 to $10,000 for the procedure, and another $600 a year to have your frozen eggs stored.

In some cases the procedure will be covered by insurance, Hage said, but that's more common when a woman has a medical reason for the procedure, like if she's undergoing cancer treatment that could affect future fertility.

Some companies, including tech giants Google, Apple and Facebook, will cover egg freezing for employees.

Still, most insurance plans won't cover egg freezing, leaving women and their partners to debate the costs versus benefits of the procedure.