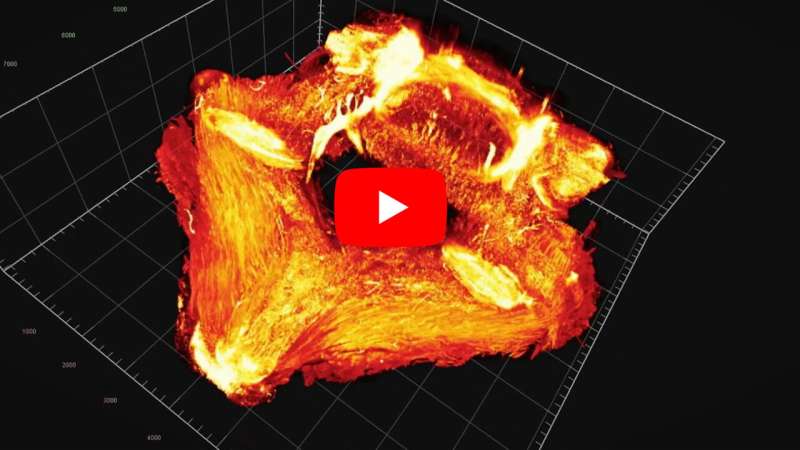 Back pain affects many people at some point in their lives, and a common cause is damage to the squishy discs or flexible, rubbery tissues of the spine. However, observing this damage at an early stage is difficult with current imaging methods. Now, researchers reporting in ACS Nano can see microscopic soft tissue destruction in animal spines by targeting denatured collagen with fluorescent molecules.

Anywhere along the spine, from the neck to tail bone, can become uncomfortable when its soft and protective tissues, including the cartilage and jelly-like intervertebral discs, become damaged and lose their structure. Daily wear-and-tear, as well as some disorders, such as facet joint osteoarthritis or ankylosing spondylitis, can degrade and unfurl the collagen proteins that give these tissues their bounce and flexibility. Detecting compromised collagen early could help patients get relief before the pain becomes severe, but this is very difficult to do with existing medical technologies, such as X-rays and magnetic resonance imaging (MRI). Previously, Yang Li and colleagues developed a collagen hybridizing peptide (CHP) probe that specifically binds unfurled collagen molecules, which happens when they deteriorate and lose their ability to cushion vertebrae. So, Li, Kuibo Zhang, Hong Shan and colleagues wanted to test if CHP labeled with fluorescent tags could be used as an imaging method to identify collagen destruction in the body.

To make the peptide probe more stable in the body, the researchers modified CHP by substituting a hydroxyl group with fluorine and then attaching a fluorescent dye to it. When healthy mice and rats were injected with the fluorescent dye-labeled CHP and imaged with near-infrared fluorescence (NIRF), the team could confirm that the fluorescing molecules accumulated on the soft tissues between the vertebrae. Then the researchers removed a portion of the animals’ spines and imaged them with light sheet fluorescence microscopy. This technique produced precise 3-D maps, which revealed denatured collagen.