Anxiety may raise a woman’s risk for weak, fragile bones, a new study suggests for the first time ever.

As women pass menopause and age, they begin to lose bone density more rapidly, making the bones more breakable and leading to osteoporosis for some.

The main reason more women develop osteoporosis so much more often than men do is the post-menopausal plunge of estrogen, which in turn decreases bone mass.

This process is inevitable and its extremity is mostly genetic, but a new Italian study found a link between women’s anxiety levels and the strength of their bones. 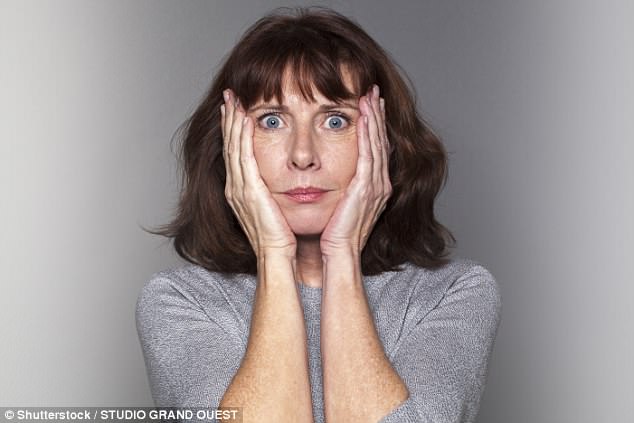 Highly anxious women are at higher risks for low bone density, breaks and fractures and it may be due to the effects of stress hormones and lower vitamin D levels, new research suggests

Anxiety disorders and osteoporosis both disproportionately affect women around the world, with 33 percent of women experiencing the former and

But even if it is not treated as a medical condition, common levels of anxiety and stress can have measurable and detrimental effects on the body.

Under stress, the body releases a hormone, called cortisol.

Cortisol gets partial credit for helping our bodies cope with the ‘fight or flight’ response, balancing our fluid retention and blood pressure while keeping less vital bodily processes like our sex drive in check.

But it also gets the blame for high blood sugar and pressure, low libido, acne and raises risks for obesity in people who are chronically stressed.

It is the less physiological side effects of stress, however, that the University Hospital of Messina researchers think most likely account for its correlation with bone density.

‘Our opinion is that anxious women are more likely to engage in poor health behaviors, such as smoking or a poor diet,’ lead study author Dr Antonio Catalano told MedicalXpress.

‘Moreover, the negative effects of stress hormones on bone status may be considered as also enhancing fracture risk,’ he added.

He and his team conducted a small, but completely novel study of 200 women who, at an average age of 68, had already gone through menopause.

When a woman goes through menopause, a number of rather dramatic changes happen in her body.

Those changes are primarily driven by precipitous drops in the female sex hormone, estrogen.

Women’s bones become fully mature around 30, but after menopause, bones start to break down more quickly than new bone cells are produced.

DOES VITAMIN D REDUCE THE RISK OF AN EARLY MENOPAUSE?

Women can cut their risk of an early menopause by eating oily fish and eggs, research suggested in May 2017.

A high vitamin D intake via food and supplements lowers the risk by 17 percent, a study found.

Vitamin D is thought to slow the ageing of women’s ovaries.

Around one in 10 women go through the menopause before the age of 45, increasing their risk of osteoporosis and heart disease, and reducing their chances of conceiving.

Their diet was recorded in food questionnaires five times over that period, during which 2,041 women entered the menopause.

Lead author Alexandra Purdue-Smithe, from the University of Massachusetts, said:  ‘Scientists are looking for anything that can reduce the risk of early menopause and things like diet, which can be easily altered, have wide-ranging implications for women.’

The main natural source of vitamin D is sunlight, however, it also appears in oily fish, egg yolks and fortified cereals.

Dairy products are not fortified with the vitamin in the UK.

Estrogen plays an important role in blocking a process known as bone resorption by which bone cells break down into their composite parts, and the remaining minerals get absorbed by the blood.

So once there is less estrogen to defend the bones, their break down speeds up.

Women who have irregular in infrequent periods are more at risk for osteoporosis, and most scientists think this is because they have lower estrogen levels.

But the Italian researchers hypothesized that this may not be the only thing contributing to variations in osteoporosis risks for postmenopausal women.

They found that  women with relatively high levels of anxiety were at a four percent greater risk of getting a bad bone fracture in a 10-year period.

Hip fractures were three percent more common in the anxious group, who tended to have lower bone density scores overall.

Without vitamin D, the body struggles to break down calcium, so even a diet high in it won’t help to strengthen bones.

‘Our findings are quite surprising because an association between anxiety levels and bone health was not reported before,’ said Dr Catalano.

Given the possible relationship between anxiety, menopause and bone loss, women who ten to get particularly stressed should try to control the parts of their lives they can: their habits.

Women would do well to avoid smoking, drinking too much and should stay active. Adding in the recommended 1,200mg dose of calcium and another of magnesium  may help preserve bone strength, too.

The science behind the vitamin D-anxiety connection is a mixed bag, with some studies finding higher levels in anxious people, and others suggesting that it helps improve stress symptoms.

Given the new study’s findings, however, women who are worried over bone loss – and worried in general – might benefit from a supplement.

Hormone replacement therapy – taking supplements of estrogen or a combination of it and progestin – has been shown in some studies to be linked to a lower risk of bone fractures.

Though it is not prescribed or recommended for treating anxiety and depression, hormone therapy may smooth out the symptoms of menopause somewhat, which could reduce stress for women going through the change.

That in turn may be helpful to preserving bone density, if the findings of the new study are borne out over time.