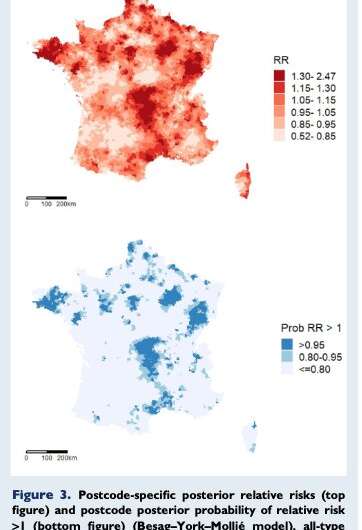 Environmental pollution from industries such as coal mining and metal works may play a role in the increasing numbers of boys born with undescended testicles, according to a study published today in Human Reproduction.

The researchers stress that their findings are hypothesis-generating, cannot show that these industries cause cryptorchidism and that further, targeted research is required. However, the study of nearly 90,000 boys is the first to describe at a national level a recent increase in incidence of the condition over time and to identify clusters of cases in parts of France that are former mining or metal-working areas, such as the Pas de Calais in northern France. The boys all had operations to correct undescended testicles between 2002 and 2014 when they were younger than seven years.

Cryptorchidism is the absence from the scrotum of one or both testes around the time of birth. It is the most common male genital defect, occurring in between one and eight per cent of babies. In most cases, the condition corrects itself within six months of birth, but approximately one in 100 boys have testicles that remain undescended. When this occurs, surgery is required to move them into the right position and this is carried out ideally before the age of one. Boys with untreated cryptorchidism may have fertility problems in later life and are at higher risk of testicular cancer.

Other research has shown that certain chemicals, such as phthalates and pesticides, are associated with cryptorchidism. In the current study, the researchers set out to study trends over time and in areas of metropolitan France to see if the local geographical environment might be an important trigger for the defect.

Dr. Joëlle Le Moal, a medical epidemiologist at the DATA Science Department, Santé publique France (Public Health France), and her colleagues identified 89,382 cases of operated cryptorchidism between 2002 and 2014 from public records; they found that the incidence of the condition increased by 36% during this time.

They used a disease-mapping model to describe the risk of cryptorchidism according to postcode, and identified 24 clusters scattered across France apart from in the south-west. The clusters were mainly in the north and central east of France, with the main cluster being around the city of Lens in the Pas de Calais, a former coal mining area. Here, the risk of having one undescended testis increased by more than a half and the risk of both testes being undescended (bilateral cryptorchidism) increased more than five-fold when compared to the national level. There were 1,244 cases and the researchers estimated this was an excess of 453 cases above the expected number for the area.

The researchers write that this area “includes the two production sites of a former smelter . . . where most of the local population was previously employed. After more than a century of non-ferrous metal production, it closed in 2003 and induced widespread environmental pollution with metals, especially lead and cadmium . . . This cluster also includes a metallurgic plant, and two industrial areas still in activity”.

The researchers observed mining activities in eight of the 24 clusters, metallurgic activities in 17 and mechanic activities in 16. They also detected clusters of bilateral cryptorchidism cases in some agricultural areas where there are orchards and vineyards, which might be sprayed with pesticides.

Dr. Le Moal said: “Our main findings are the increase in the frequency of operated cryptorchidism in France during the study period, and the strong tendency for cases to cluster together in particular locations. This is the first time that such a finding has been documented at a country level for this birth defect. Our results suggest that the geographical environment could contribute to the clustering of cryptorchidism and interact with socio-economic factors. The industrial activities identified in the clusters are potentially the source of persistent environmental pollution by metals, dioxins and polychlorinated biphenyls, known as PCBs. PCBs, pesticides and dioxins are suspected to play a role in cryptorchidism and other testicular problems by disrupting hormones.”

Low socio-economic status is an established risk factor for cryptorchidism and several of the clusters identified in the study were in areas where economic activity was declining with the closure of industries. Other factors that are linked to a higher risk of cryptorchidism include maternal smoking and being born prematurely or small for gestational age, all of which are known to be more common in industrialised areas and in association with low socio-economic status.

Dr. Le Moal said: “We have highlighted several hypotheses that must be tested in further research. Our study is interesting and new because we used a very large, nationwide sample that enabled us to discuss plausible geographical hypotheses. However, these results must not be over-interpreted. The persistent pollutants that we identified could be traces associated with other chemicals. Moreover, we do not know exactly how the population could be contaminated.”

The methods used in the study may have under-estimated the health problem as it reflects cases of cryptorchidism that were surgically corrected. Other limitations include the fact that surgical practices may have evolved and there may be local differences.

In an accompanying commentary, Professor Richard Sharpe, of the Medical Research Council (MRC) Centre for Reproductive Health at the University of Edinburgh, UK, writes that this is a “landmark study” and, in identifying 24 “hotspot clusters” of cryptorchidism cases scattered across France, it “confirms an important role for environmental factors in determining risk of cryptorchidism”.

He continues: “What sets the present study apart is its nationwide scale, and, as a result, its ability to provide a snapshot of the risk of a male baby having persistent cryptorchidism (i.e. requiring surgical correction) according to where in France he was born/spent his early life; identification of an increase in cases of cryptorchidism over the short span of time of the study is icing on the cake, albeit rather alarming.”

He writes that the study is important for four reasons. “First, it uses the most developed spatial monitoring statistical approaches and is thus technically front-rank. Second, it uses data for a whole country over a 13-year period. Third, it provides robust supporting evidence that environmental impacts (via the mother) on the male fetus are a very real health threat today, even in a modern developed country like France. Fourth, and in my opinion most importantly, it suggests that our recent research focus on environmental chemicals as a potential source of cryptorchidism (and other male reproductive disorders that are increasing) may have been correct in principle but incorrect in practice. Correct, because the hotspot clusters of cryptorchidism cases are clearly associated with industrialized areas that are proven to increase human exposure to numerous pollutants . . . Incorrect, because the main focus of research in this area over the past 20+ years has been on chemicals to which most of the population is lowly exposed via food (e.g. bisphenol A, phthalates, modern pesticides) rather than those more associated with proximity to heavy industry.