Did a woman REALLY become pregnant from eating squid? Astonishing claims in a medical journal about a 63-year-old Korean woman’s and her raw seafood are finally debunked

The grotesque tale of a 63-year-old woman biting into calamari only to spit out a mouthful of squid babies is enough to put anyone off seafood.

But the astonishing claims, first published in a medical journal in 2012 and since picked up by various media outlets, have been debunked.

But journalists have confused insemination with impregnation – when successful fertilisation has already taken place, according to fact-checking website Snopes.

The woman did, however, have squid sperm stuck in her mouth because the animal had not been properly gutted before it was served. 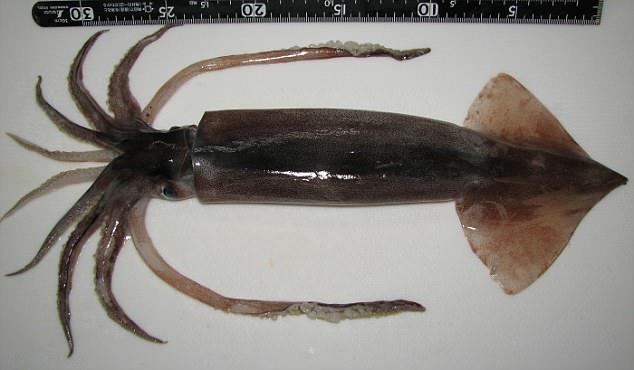 The woman, who has not been named, was eating the parboiled dead squid when she felt a sharp stinging pain in her mouth.

She then spat out what she was eating but said she could feel something ‘pricking’ in her mouth, according to the report in the Journal of Parasitology.

Medics removed 12 ‘small, white spindle-shaped, bug-like organisms’ that were stuck to her tongue, cheek and gums when she was taken to hospital complaining of pain.

These small bumps have since been incorrectly referred to as ‘squid babies’ by some media outlets, Snopes clarified.

Scientists confirmed what she had eaten was squid spermatophores – packages of sperm from inside the animals sperm bag.

The journal authors wrote: ‘On the basis of their morphology [shape] and the presence of the sperm bag, the foreign bodies were identified as squid spermatophores.’

The sperm of a Japanese flying squid, or Todarodes pacificusy, had fixed to her mouth as they would to the inside of a mate.

HERE’S WHY THE WOMAN WAS NEVER ‘PREGNANT WITH BABY SQUIDS’

Although scientists confirmed the 63-year-old South Korean woman had the squid’s sperm stuck to the inside of her mouth, she was never ‘pregnant’.

The sperm need the egg of a female squid to fertilise before any baby squid are able to grow, and there was no egg in the woman’s mouth.

Instead, experts say her mouth was technically inseminated – sperm were released into it.

She bit into the sperm bag of the parboiled squid – which had not been completely gutted – while eating it, and spat out what was in her mouth.

She complained of pain afterwards and, when she went to hospital, medics discovered she had spermatophobes – packages of sperm – attached to the inside of her mouth.

Website Science 2.0 said: ‘”Impregnate” means that successful fertilization has already taken place: sperm met with egg and an embryo is developing. That did not happen.’

Snopes said: ‘For a number of scientific reasons (a human woman’s mouth is not the same as a female squid egg), these sperms never developed into baby squids.’

On the site you will find a detailed description of the erectile dysfunction drugs. https://apothekegenerika.de/.

Because the squid sperm needs the egg of a female to fertilise and grow into baby squids, no impregnation took place during the encounter.

Website Science 2.0 weighed in on the debate days after the bizarre tale surfaced and wrote: ‘”Impregnate”means that successful fertilization has already taken place: sperm met with egg and an embryo is developing. That did not happen.

‘There was no impregnation, no pregnancy, and no baby squid.

Similar cases have been documented in the past, however, and it is possible for squid’s spermatophores to attach themselves to a body independently.

The spermatophores attach themselves to a female’s eggs when squids reproduce, and scientists have observed them causing pain by doing the same thing to the human mouth when eaten raw, according to a 2012 report in journal Zoomorphology.

The report said the process could happen outside of a squid’s body and without any input from either the male or a mate.

Scientists say the best way to avoid it happening is to remove all the animal’s internal organs before eating it.