It does this by activating the enzyme PGK1, which is critical for energy production in cells.

This prompted the scientists to test terazosin in PD, a disease of which lower energy production is a hallmark.

When the drug was tested in 13 men with the condition, the team noticed the rate at which their motor disability got worse slowed down.

Further research with more than 2,800 PD patients then suggested terazosin ‘reduces the signs, symptoms, and complications’ of the progressive condition.

A benefit of ‘re-purposing’ a drug which is already used for another condition is that it has already been proven for people to take, the scientists said. 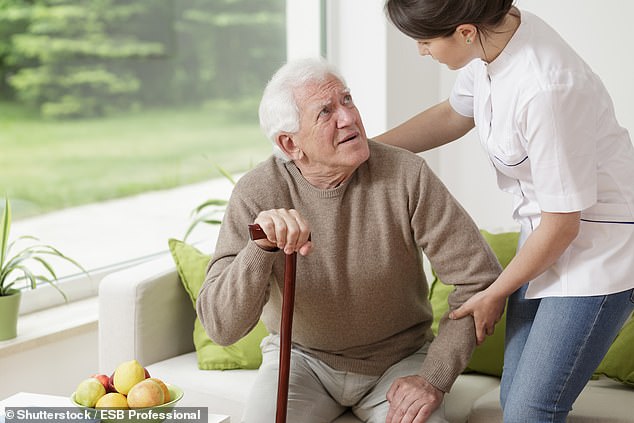 The studies were carried out by a team of international scientists, which included researchers from Capital Medical University in Beijing and the University of Iowa.

Around one in every 350 adults in the UK are diagnosed with Parkinson’s, according to Parkinson’s UK.

And more than 10million people are living with the disease in the US, Parkinson’s Foundation statistics reveal.

While benign prostate hyperplasia, for which terazosin is already used, affects around 40 per cent of men aged 50 in the UK, rising to 90 per cent for those in their 90s, the National Institute for Health and Care Excellence states.

In the US, the condition affects around half of men aged 51 to 60 and up to 90 per cent of men over 80, according to National Institute of Diabetes and Digestive and Kidney Diseases.

‘Current medicines can partially alleviate some of the symptoms of Parkinson’s disease,’ senior author Dr Michael Welsh, from Iowa, said.

‘But we have zero treatments that change the progressive course of this neurodegenerative disease.

‘That’s a terrible state, because as our population ages Parkinson’s disease is going to become increasingly common.’

Reduced energy production in cells is linked to both PD and ageing. Old age is also associated with the progressive neurological condition.

WHAT IS PARKINSON’S? THE INCURABLE DISEASE THAT STRUCK BOXER MUHAMMAD ALI

Parkinson’s disease affects one in 500 people, and around 127,000 people in the UK live with the condition.

It causes muscle stiffness, slowness of movement, tremors, sleep disturbance, chronic fatigue, an impaired quality of life and can lead to severe disability.

It is a progressive neurological condition that destroys cells in the part of the brain that controls movement.

Sufferers are known to have diminished supplies of dopamine because nerve cells that make it have died.

There is currently no cure and no way of stopping the progression of the disease, but hundreds of scientific trials are underway to try and change that.

The disease claimed the life of boxing legend Muhammad Ali in 2016.

And several inherited forms of PD are caused by genetic defects in cellular energy pathways, the researchers wrote in the Journal of Clinical Investigation.

All this suggested terazosin’s ability to boost energy production in cells may prevent their death in PD.

PD is caused by the ‘impairment or death of dopamine-producing nerve cells in a region of the brain called the substantia nigra, which controls the body’s balance and movement’, according to Parkinson’s News Today.

To put this to the test, the drug was first assessed in animal studies.

‘When we tested the drug in various different animal models of PD, they all got better,’ co-senior author Dr Lei Liu, from Beijing, said.

‘Both the molecular changes in the brain associated with cell death and the motor co-ordination in the animals improved.’

The team found terazosin could prevent neurodegeneration if given to the animals before the onset of cell death.

It also slowed or stopped the process if it had already started to take place.

Although the animal studies were encouraging, the scientists wanted to see if the same effect occurred in humans.

They realised older men are at higher risk of both PD and BPH. This suggests existing clinical databases might uncover whether terazosin has any effect on PD, the team wrote.

In the next part of their investigation, the scientists looked at the Parkinson’s Progression Markers Initiative database.

This is compared to the 293 PD patients who took either the drug tamsulosin for enlarged prostate or nothing at all.

Tamsulosin is used in BPH but has no effect on PGK1, which makes it a good control, the researchers claim.

The difference in progressive motor disability was statistically significant between the two groups, however, the team noted 13 patients is small.

Looking to confirm their results in a larger sample, they analysed the IBM Watson/Truven Health Analytics MarketScan Database, which includes anonymous records from more than 250 million people.

From these, the scientists identified 2,880 PD sufferers who were taking one of three drugs that target PGK1. Their outcomes were compared against 15,409 patients taking tamsulosin.

Medical codes were used to track PD-related diagnoses, as well as hospital or doctor visits for the patients.

‘What is particularly exciting is terazosin is a “re-purposed drug”,’ neurologist Dr Nandakumar Narayanan said.

‘So, we have a lot of safety data already from its clinical use to treat enlarged prostate.’

The team are recruiting participants for an early stage study into terazosin in Iowa.

‘This is the beginning of what we hope is a sustained and rigorous effort to test this molecule prospectively in order to really determine whether this works,’ Dr Narayanan added.