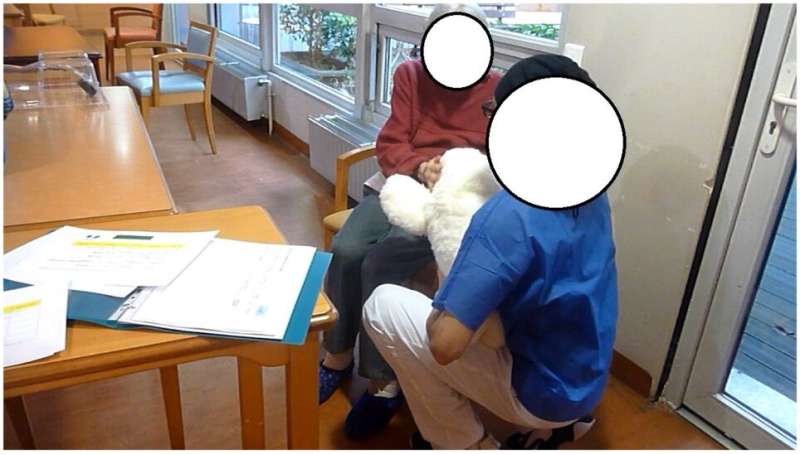 In recent years, many roboticists and psychologists have been assessing the value of social robots as companions and assistants for older adults. Although some findings suggest that they could be useful, so far, they have only been implemented in a few elderly care settings.

Martin Chevallier, a researcher at École des Hautes Études en Sciences Sociale in Paris, has recently carried out a study directly exploring the potential of Paro, a seal-shaped robot designed to alleviate symptoms of dementia, in an elderly care home in France. His paper, published in SAGE Social Studies of Science, suggests that while social robots could have interesting applications in geriatric care, human care takers still play a key role in helping older adults to get acquainted with these robots.

“My paper is based on the ethnography of a two-week trial of the best seller care robot Paro in a French public care home near Paris,” Chevallier told Medical Xpress. “I was very lucky to successfully conduct this research just before the lockdown in March 2020, and thus apprehend the socio-material thickness of the daily use of Paro by older adults and their caregivers.”

In one of his previous research studies, conducted between February and April 2019, Chevallier explored the potential use of social robots as customer assistants in a luxury department store. Interestingly, he found that as they interacted with the robot, customers greatly benefitted from the additional support of third-party human actors, such as shop assistants or hostesses.

“These third-party actors (a few people employed by the store and especially a hostess), often compensated for the failures of the voice recognition system in various ways, even if they struggled to debug the system when the robot was voiceless or when its arm was frozen,” Chevallier said. “They also seemed to make the robot more appealing, as they invited passersby to come closer to the robot and engage with it.”

Inspired by his previous findings, Chevallier set out to investigate the value of care givers as mediators of the interactions between older adults and robots. While many social robots are designed to be used without a human mediator present, he wished to explore the hypothesis that these human agents play a crucial role in some settings.

“I spent two weeks in the care home dementia ward before the trial even started, to get to know the residents and their caregivers (chatting with them, observing encounters, meals, etc.) and, more broadly, the spatio-temporal routines of the unit,” Chevallier explained. “I then observed and video recorded interactions between Paro, the residents and one or several caregivers. From my very first observations, I was struck by the effort deployed by caregivers to overcome the resident’s passivity.” 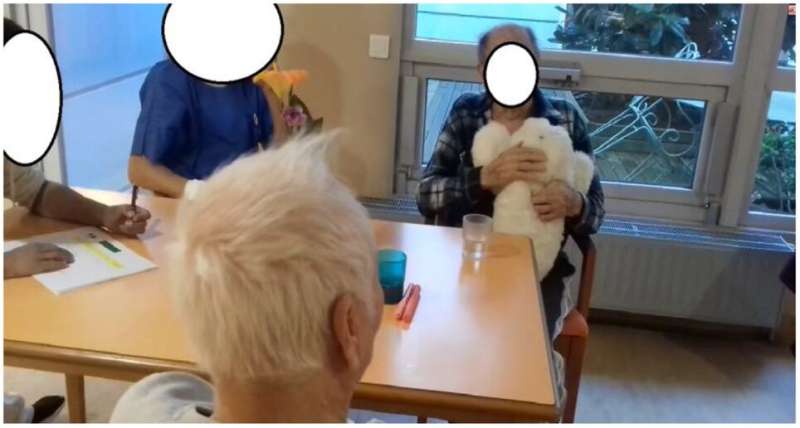 During his experiment, Chevallier observed that placing the Paro robot in front of or on the lap of elderly home residents was often not enough to prompt them to interact with it. Moreover, the robot elicited a wide range of reactions from the older adults participating in the study, ranging from curiosity to distress.

The Paro robot integrates a state-of-the-art algorithm that allows it to interact with users in various ways. It is also designed to be appealing, cute and user-friendly. Despite these advantageous features, Chevallier found that without support from care givers, the interactions between the care home residents and the robot did not run smoothly.

“I noticed that caregivers had to provide an interactional support, consisting in a verbal and/or tactile guidance, to foster, sustain and co-construct the meaning of the encounter between Paro and its final user,” Chevallier explained. “These observations suggests that the mainstream, biomedical approach of Paro’s psychosocial benefits neglects the crucial role of caregivers in more-than-dualistic human-robot interactions. Specifically, this approach overestimates the robot’s autonomy (it only reacts to environmental stimuli, then it doesn’t really engage with the resident), and doing so, it maintains the illusion of ‘care’ or ‘social robots,’ decreasing the workload of human workers.”

Interestingly, Chevallier observed that even the less-educated and low-ranking care givers in the home he visited could provide subtle but rich, dynamic and personalized guidance during interactions between their residents and Paro. This guidance included both repetitive and situation-specific behaviors, which were aligned with the initial reaction of each older adult, such as a lack of attention or interest, as well as different fears (i.e., fear of being bitten, of touching the robot, etc.).

“In a few situations, a fine knowledge of residents’ biography and tastes proved decisive in finding the right tone and turn the robot into an appealing interactional partner,” Chevallier said. “A somehow natural implication of my findings is to take this ‘interactional framing’ work seriously and stop believing that care robots can compensate for a lack of human care takers or can autonomously provide good quality (and cheaper) care. On the contrary, an effective use of such devices rests on the availability of human carers and their willingness to use them, which are far from being self-evident in a context of chronic overwork.”

Overall, Chevallier’s observations highlight the crucial role that human caregivers play in safely and successfully introducing social robots in elderly care settings. In the future, his recent work could inspire healthcare and elderly care professionals to devise more effective strategies to share social robots with their patients, which also entail the presence of a human mediator.

“After completion of my Ph.D. thesis, I plan to conduct a post-doctoral study in Japan, which would be a cross-national study of the development and implementation of care robots in both Japan and France,” Chevallier added. “Comparative works in this area are almost inexistant, and I would like to relate similarities and differences in the diffusion of care robots in France and Japan to common or distinct imaginaries of a robot ‘revolution,’ public policies relative to research and funding, and the management of projects in situ (in hospitals and geriatric facilities) by local actors and frontline care takers.”