Bacon butties. Packed lunches. Toast with butter. Sliced bread may be a staple, but few of us think of it as a health food.

Last month, Pret a Manger was ordered to change claims its food used only ‘natural’ ingredients, after its bread was revealed to contain three E numbers: chemicals to produce softer bread that stays fresh longer.

About 11 million loaves are sold in the UK every day, and according to the National Association of British and Irish Flour Millers around 70 per cent of them are white.

Here, dietitian HELEN BOND takes a closer look at what’s in your bread — the good and the bad — using a Warburtons white 800g Toastie loaf, the UK’S bestseller, as an example… 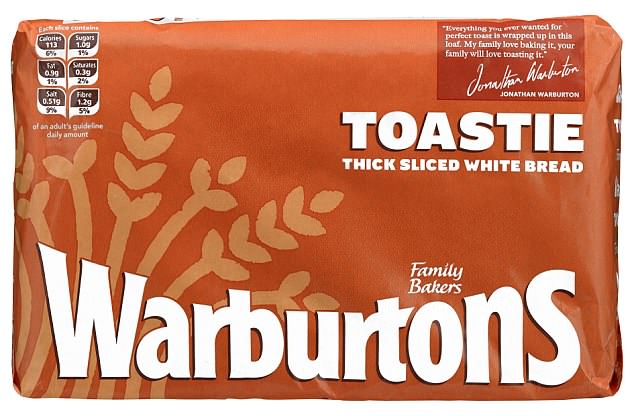 WHITE FLOUR FOR A VITAMIN BOOST

White flour is made by stripping whole wheat grains of two parts — the bran (the fibre-rich outer layer) and the germ (the nutrient-rich core). The remaining starchy inner part of the grain, known as the endosperm, is then milled.

By law, all white wheat flour milled in the UK has to have calcium, iron, and vitamins B1 and B3 added back — these are reduced when the bran is removed. So technically even the poshest artisan loaf made with British-milled white flour still contains ‘additives’. This means that like all white breads, two (47.4g) slices of Warburtons Toastie is a good source of B vitamins, needed for a healthy nervous system.

Two slices also provide 18.8 per cent of our recommended daily intake of calcium, needed for strong bones and teeth. Two slices of an average wholemeal loaf provide about 12.4 per cent (although naturally). In both cases, that’s roughly as much as in half a small (200ml) glass of milk — a significant amount, especially for children and those who don’t eat dairy.

There’s also 10.8 per cent of our daily iron, important for our immune system and to protect against anaemia. However, wholemeal, which provides 16.2 per cent of our iron in two slices, has the edge.

As for fibre, wholemeal bread is, unsurpisingly, three times richer. Two thick slices provide around 6.6g, just over a fifth of our daily intake, whereas two slices of the Warburtons Toastie provide 2.2g, or 7.3 per cent of your daily intake. Paltry by comparison, yes, but the white is still no slouch, providing more fibre than a banana.

NEARLY HALF THE LOAF IS WATER

It might surprise you to learn that the average loaf is nearly 40 per cent water, and this doesn’t change much whether it’s basic sliced or a fancy type. Water enables the proteins in wheat to form stretchy gluten — a compound that helps the mixture retain carbon dioxide gas bubbles as the flour reacts with yeast. The bubbles help give bread its rise and light texture.

Without gluten and the bubbles, it would be too dense and flat. In an average 800g loaf, there’s 320g of water — around 22 tablespoons.

Yeast’S role is to ferment sugars in the flour, producing carbon dioxide gas and thus helping to rise or ‘leaven’ the dough.

The origins of our modern sliced white lie in the early Sixties when a new speedier way of making bread, called the Chorleywood process, was invented. It revolutionised the manufacture of bread worldwide, doubling the shelf-life of the average loaf, while making it softer and less expensive. The method involves adding fat, additives and enzymes to the dough, before mixing at very high speeds. Extra yeast is also used to create larger volumes of gas and a quicker rise. 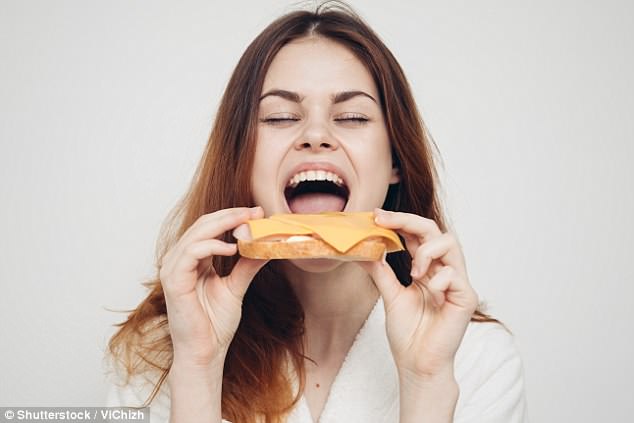 Preference: About 11 million loaves are sold in the UK every day, and according to the National Association of British and Irish Flour Millers around 70 per cent of them are white

It’s a myth that yeast in food can contribute to yeast infections such as thrush, because no live yeasts will remain in a loaf, as they’re killed off during baking. But it is true that a traditional sourdough loaf, made without any additional yeast, is likely to be better for gut health, as the Lactobacilli bacteria cultures used to ferment the dough produce lactic acid (hence the sour taste) that helps friendly bacteria in the gut to thrive.

Some research has suggested people who get IBS-type symptoms such as bloating after eating bread may find sourdough easier to stomach. Even if this is the case, it’s unlikely to be yeast in commercial bread that’s the problem.

Salt adds flavour and plays a role in helping the loaf retain its shape. Kneading the bread helps the gluten ‘stretch’ — creating room for the air bubbles — then salt helps tighten and strengthen it for the loaf to hold its form.

However, homemade bread may be saltier than shop-bought. For example, in the whole of the Warburtons Toastie loaf there is 7.8g salt, whereas Paul Hollywood’s white cob recipe, which will yield a loaf around the same size, specifies two teaspoons or 10g of salt.

Fat is needed in mass-produced bread to help it hold its shape. The fat does this by coating the elastic gluten strands, adding support. This loaf has both rapeseed and sustainable palm oil. Palm oil is often used in sliced bread, as it’s semi-solid and harder fats work best for this purpose.

But only a little is used. Two slices of Warburtons white sliced bread provide 2 per cent of your recommended maximum saturated fat intake and bread is still very much a low-fat food — there’s only 1.8g in two slices of this bread.

THE SECRET TO A WHITER WHITE

Almost all mass-produced loaves contain a tiny amount of soya flour (about 1 per cent or less of the ingredients).

The reason? An enzyme called lipoxygenase in the soya bleaches orangey pigments in the wheat flour, resulting in a whiter crumb.

In the past, flour was whitened with chemicals including chlorine and chlorine dioxide, but since 1999 this has been banned in the EU. Soya flour is a potential allergen. Unfortunately, it is fairly ubiquitous in supermarket loaves, including wholemeal versions.

CHEMICALS TO STOP IT GOING OFF

Calcium propionate is a preservative, derived from a fatty acid found naturally in foods such as butter and Swiss cheese.

It’s added to many loaves to prevent the growth of mould and bacteria. There are anecdotal claims that some people suffer migraines triggered by the preservative, and a small study published in 2002 in the Journal of Pediatrics and Child Health suggested it may worsen behaviour in hyperactive children. But for the vast majority the additive seems trouble-free.

In commercial bread-making, emulsifiers — substances that help oil and water combine — are added to help the fat bond to wet flour. The two in this loaf are E481 and E472e. Both are modified forms of fat and by far the most common in supermarket loaves. E472e also softens the crumb and stops bread going stale as fast.

JUST A PINCH OF VITAMIN C

This is here as a flour treatment agent. Vitamin C — or ascorbic acid — isn’t just used in mass-produced bread: home cooks often use a pinch, in the form of a powder, which you can buy for baking.

During the mixing of the dough, ascorbic acid aids the formation of bonds between gluten strands, helping a loaf hold its shape.

There’s not enough of the immune-friendly vitamin C to get nutritional benefit from it though — even if you ate the whole loaf.

Enzymes are protein molecules that speed up and facilitate chemical reactions. All loaves have them, but you won’t find them on the label, as they’re classed as processing aids and are destroyed by heat so don’t end up in the final loaf.

The most common used is amylase, which breaks down starch in the flour into the sugar needed to feed the yeast. In bread made the slower, traditional way, enzymes are released naturally by the yeast as the dough is left to rise.

IN DEFENCE OF SLICED BREAD

SO do we really need to ditch our beloved sliced white? Making your own means you can choose exactly what goes into it, such as how much salt you add. But the idea that all mass-made bread is somehow bad is misguided.

A sliced wholemeal loaf is a healthy high-fibre option, and a white artisan loaf isn’t any more nutritious than a basic sliced white. Sliced loaves are portion-controlled, too — you can easily cut huge chunks of uncut loaves, potentially doubling the calories.