‘The main reason the NHS is in crisis’: Jeremy Hunt sparks a backlash from furious medics on the day he becomes the longest-serving health secretary in history

Scores of furious medics have taken to Twitter to blast Jeremy Hunt on the day he has become the longest-serving health secretary in history.

However, Mr Hunt’s five year and 274 day-reign has seen him weather a series of political storms and also some of the worst performance statistics on record.

Waiting times in A&E have ballooned to their worst ever levels over the past winter and hundreds of thousands of patients have been left waiting longer than 18 weeks for routine operations. Concerned medics have repeatedly warned the cash-strapped NHS has ‘no more to give’.

Doctors, nurses and politicians took to Twitter last night and in the early hours of this morning to condemn Mr Hunt’s controversial tenure – with one angry user claiming it is the ‘main reason the NHS is in crisis’. 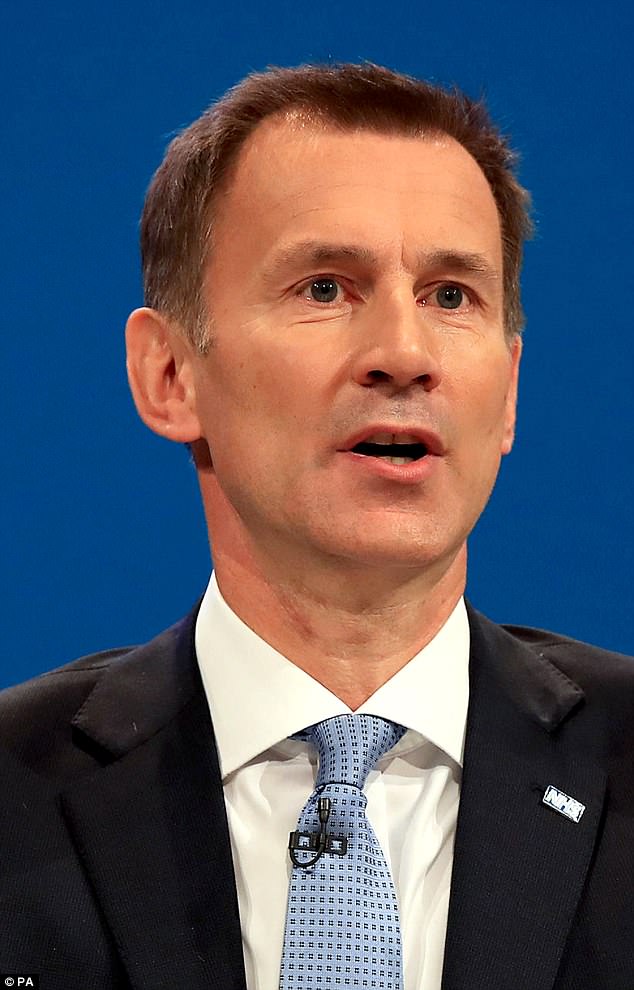 Taking to social media in the early hours of this morning, Dr Sukaina Hirji, an NHS GP, branded Mr Hunt’s tenure as ‘not a great record’

JUST HOW STRETCHED IS THE NHS?

Experts said the NHS was in the grip of an ‘eternal winter’ and many hospitals are still struggling to cope with the unprecedented pressure.

Health and Social Care Secretary Jeremy Hunt was forced to admit it was the ‘worst winter ever’ amid a severe outbreak of flu and cold weather.

Chiefs cancelled thousands of operations in a controversial move to ease pressure. And experts have suggested this may be the only option to stop a crisis next year.

The latest monthly data from NHS England also shows that waiting times for routine operations, such as knee and hip replacements, are at their highest since 2004.

And violent assaults on staff have risen by 10 per cent in a year – partly driven by frustration with waiting times.

He was responsible for a controversial contract for junior doctors in England that sparked the biggest walk-out of doctors in NHS history in 2016.

And Mr Hunt was forced to cancel tens of thousands of operations this winter as hospitals delayed non-urgent operations to try and ease the unprecedented crisis.

Waiting-time performances in A&E units hit their lowest level in 14 years last winter – even worse than the previous winter, which was branded a ‘humanitarian crisis’.

Staff described patients ‘dying prematurely’ in corridors before they were seen as furious medics begged for extra funding to cope with the pressure.

Dr Ben White, a critic of the Health and Social Care Secretary, yesterday offered an answer as to how the 52-year-old has managed to keep his role. 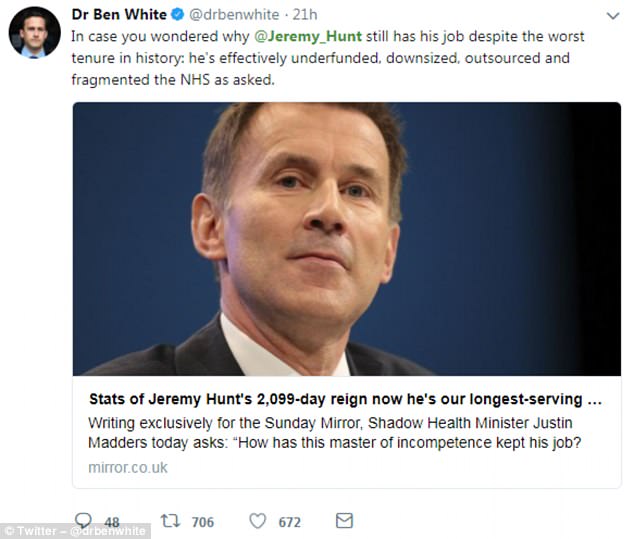 Dr Ben White, a critic of the Health and Social Care Secretary, yesterday offered an answer as to how the 52-year-old has managed to keep his role

DOES THE NHS RECEIVE ENOUGH FUNDING?

Campaigners have argued for years that the NHS is strapped of cash and desperately needs more funding to cope on a day-to-day basis.

it is now in the midst of its worst financial crisis in a generation, they warn, as the health service struggles to function on a tightly-constrained budget.

A&E waiting times have soared to record levels, tens of thousands of patients have had to wait outside casualty units for treatment and dozens of trusts have reported they have no free beds this winter.

NHS England has been allocated £123 billion this financial year from the Budget – but further cash injections have been asked for.

Last November, Chancellor Philip Hammond promised the health service a £2.8 billion cash injection over two years – but this was a third of what experts demanded.

Health trusts across the country have reported severe financial constraints in recent years as chiefs tightens their purse strings.

In a scathing attack, he explained how Mr Hunt has ‘effectively under-funded, down-sized, out-sourced and fragmented the NHS as asked’.

He posted the answer in a tweet that began: ‘In case you wondered why Jeremy Hunt still has his job despite the worst tenure in history’.

Heidi Dodd, a nurse in Billingshurst, responded to his tweet and urged Mr Hunt to ‘face the real people who live with the consequences you are responsible for.’

In February, Mr Hunt surpassed the tenure of Aneurin Bevan, the Labour founder of the NHS – which celebrates its 70th anniversary next month.

But his new accolade, which has seen him pip Mr Fowler to the top spot, has also seen him receive the wrath of politicians and the public.

Labour’s official Twitter account, which has more than 600,000 followers, chipped in to ‘mark the occasion by compiling just a few of his best bits’.

It mocked-up a ‘hall of shame’, with a mosaic portrait of Mr Hunt that included some of his TV interviews since he began the role in September 2012. 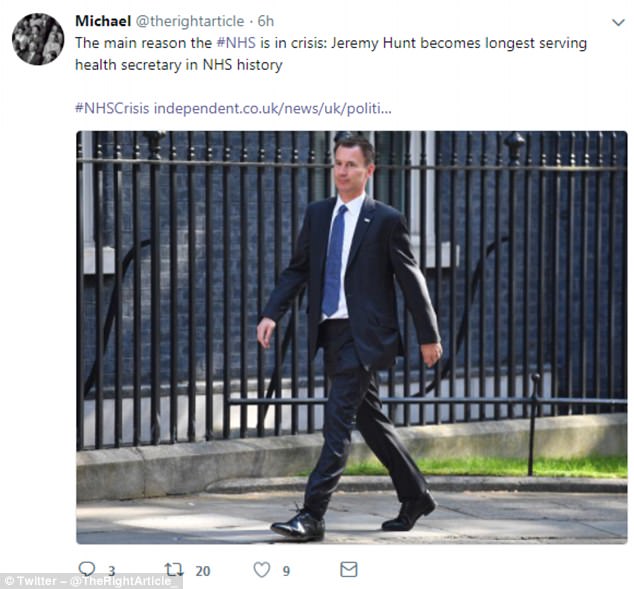 Twitter user Michael, who goes by the handle @therightarticle_, wrote that Jeremy Hunt becoming the longest-serving health secretary is the ‘main reason the NHS is in crisis’

WHO ARE THE FIVE LONGEST-SERVING HEALTH SECRETARIES?

The two-minute-long clip, published yesterday, also featured some of the statistics that have been released in the past two winter crises.

David Lammy, Labour MP for Tottenham, also joined in the mock celebrations for Mr Hunt. He tweeted his ‘congrats’.

‘Since you’ve been in the job, the number of people waiting more than four hours in A&E is up 842 per cent,’ Mr Lammy continued.

He also added that the number of people waiting longer than a fortnight for urgent cancer treatment has more than doubled.

Twitter user Michael, who goes by the handle @therightarticle_, wrote that Jeremy Hunt becoming the longest-serving health secretary is the ‘main reason the NHS is in crisis’.

And Twitter user Socialist Voice, a ‘hard left militant’, drew up a mock board game called ‘Jeremy Hunt’s Operation’ to celebrate his tenure.

Instead of listing body parts, it gave the options of ‘blaming nurses’ and privatizing several aspects – two actions Mr Hunt has been criticised for.

Mr Hunt took over from Andrew Lansley, who was spectacularly sacked by David Cameron today because of his failure to push through NHS reforms.

Heidi Dodd, a nurse in Billingshurst, responded to Dr White’s tweet and urged Mr Hunt to ‘face the real people who live with the consequences you are responsible for’ 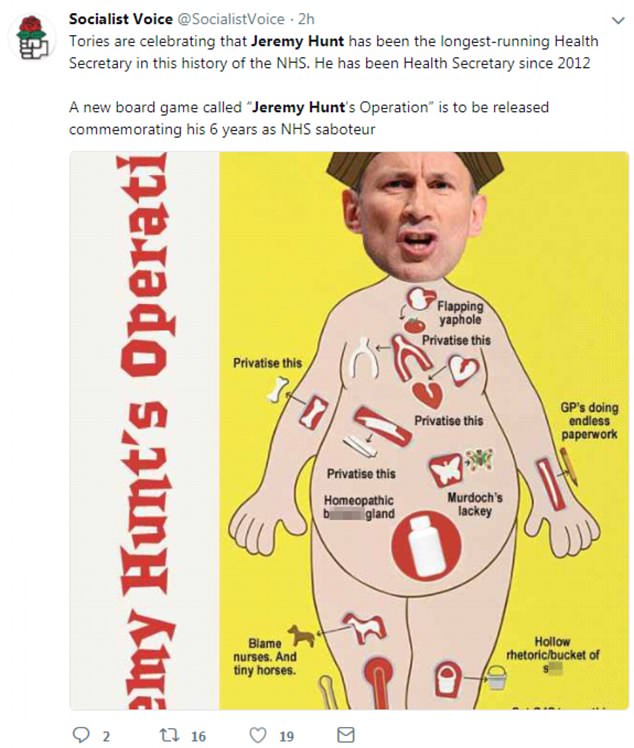 Despite his fierce critics, Mr Hunt, MP for South West Surrey, has been behind major plans to cut the number of baby deaths and injuries in childbirth.

And in his first speech since taking charge of social care in January, he outlined a blueprint to transform care for the elderly, who are too often treated as ‘tasks on a to-do list’.

But many medics argue his tenure will be remembered for funding cuts on the NHS that has led to the health service buckling under unprecedented pressure.

Mr Hunt tweeted this morning. He wrote: ‘Sometimes time has flown, at others it’s been achingly slow, but every second of last 5+ yrs has been a privilege.

‘Thanks for being extraordinary in so many ways: much more impressive than a long serving Health Sec are the staff who have devoted 10, 15 or 20+ yrs to patients.’ 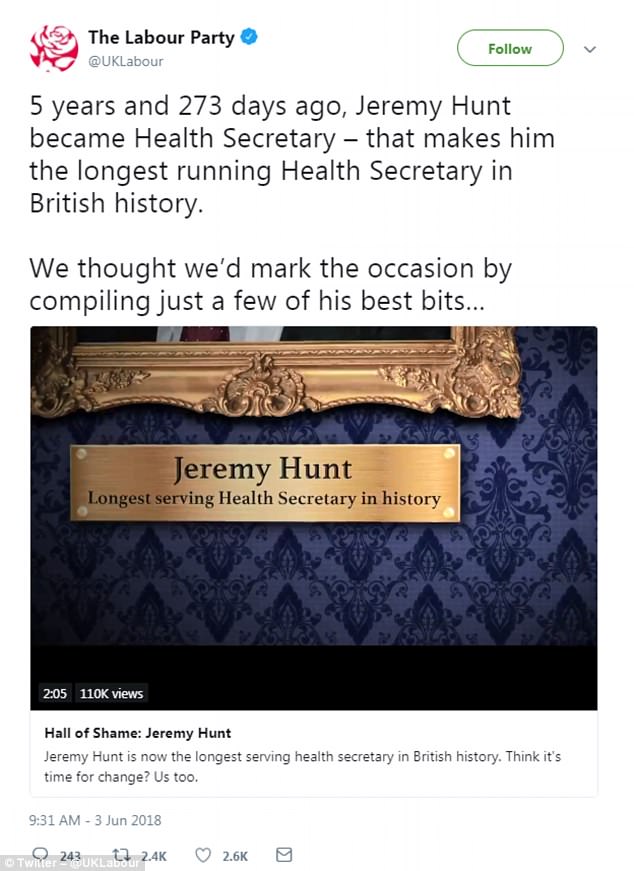 Labour’s official Twitter account, which has more than 600,000 followers, chipped in to ‘mark the occasion by compiling just a few of his best bits’

David Lammy, Labour MP for Tottenham, also joined in the mock celebrations for Mr Hunt. He tweeted his ‘congrats’

WHAT ARE SOME OF THE BIGGEST CHALLENGES JEREMY HUNT HAS FACED?

A controversial new contract for junior doctors in England sparked the biggest walk-out of doctors in the history of the NHS in 2016.

Proposals for a truly seven-day health service were central to the bitter dispute, with medics concerned about patient safety and the mounting pressure it could place on their working lives and morale.

Tens of thousands of operations and appointments were cancelled and rearranged as a result of strikes throughout the year.

Years of austerity means ‘the dramatic improvements made in health care over the last 20 years are at risk of slipping away,’ said Chris Ham, chief executive of The King’s Fund.

Leading think tanks said last year that NHS funding will be at one of the lowest rates in its history as funding growth slowed to 0.4%.

The Health Foundation, The King’s Fund and the Nuffield Trust estimated there would be a funding gap of about £20 billion in five years based on spending levels in 2017/18 – calling for a 4.3 per cent average annual increase to keep pace with demographic pressures and an ageing society.

Waiting-time performances in accident-and-emergency departments hit their lowest level in 14 years last winter, with staff describing patients ‘dying prematurely’ in corridors before they are seen.

Rising numbers of flu cases and respiratory illness saw an increase in hospital admissions, with A&E heads warning Theresa May of ‘intolerable’ pressures.

Tens of thousands had surgery cancelled in England as hospitals delayed non-urgent operations to try and ease the crisis.

Mr Hunt has faced claims of wanting to privatise parts of the health service from critics.

The physicist said he wanted to stop commercial companies being used to run certain services, saying he was concerned so-called accountable care organisations were ‘an attack on the fundamental principles of the NHS’.

The Health Secretary said the scientist was wrong to claim the health service was edging towards privatisation, calling claims of a US-style system a ‘most pernicious falsehood’.

Mr Hunt displayed ‘complete ignorance’ when he made comments about abortion time limits when he first took up his post, leading doctors said.

In 2012, he generated controversy after saying he felt 12 weeks after conception was ‘the right point’ for the limit on abortion, which currently stands at 24 weeks.

Mr Hunt turned down Prime Minister Theresa May’s offer of the business brief in a Government Cabinet reshuffle earlier this year – insisting instead on an expanded health and social care role.