Home » Health News » Glioma invasion may be affected by parietooccipital fissure, white matter fibers rather than being a random phenomenon 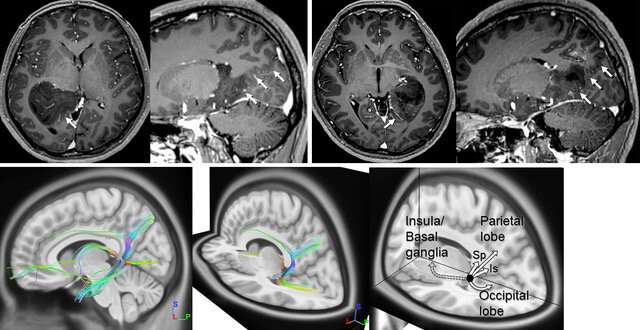 Researchers from four academic neurosurgical centers in Japan found that the parietooccipital fissure, which divides the temporal, occipital, and parietal lobes of the brain, acts as an obstacle that may result in less invasion of posterior medial temporal gliomas toward the occipital lobe.

Detailed findings, including images obtained with magnetic resonance and diffusion tensor imaging and fiber tractography, are provided in the article “Role of the parietooccipital fissure and its implications in the pathophysiology of posterior medial temporal gliomas,” by Ichiyo Shibahara, MD, Ph.D., and colleagues, published today in the Journal of Neurosurgery.

Gliomas are the most common primary brain tumors and have a poor prognosis even with currently available therapies. An important treatment strategy is surgical removal of as much tumor as possible without damaging important functional areas of the brain, a precaution that requires detailed information regarding the individual anatomy of each patient.

As the researchers state, their evidence confirms that in patients with posterior medial temporal glioma the parietooccipital fissure is an uninterrupted main sulcus comprising the posterior boundary of glioma invasion. Therefore, this fissure is a key landmark for understanding the complex anatomical architecture and invasion pattern of posterior medial temporal gliomas during preoperative analysis, information that may lead to more effective surgical treatment.