Around the world, more centers are bringing together seniors and toddlers. 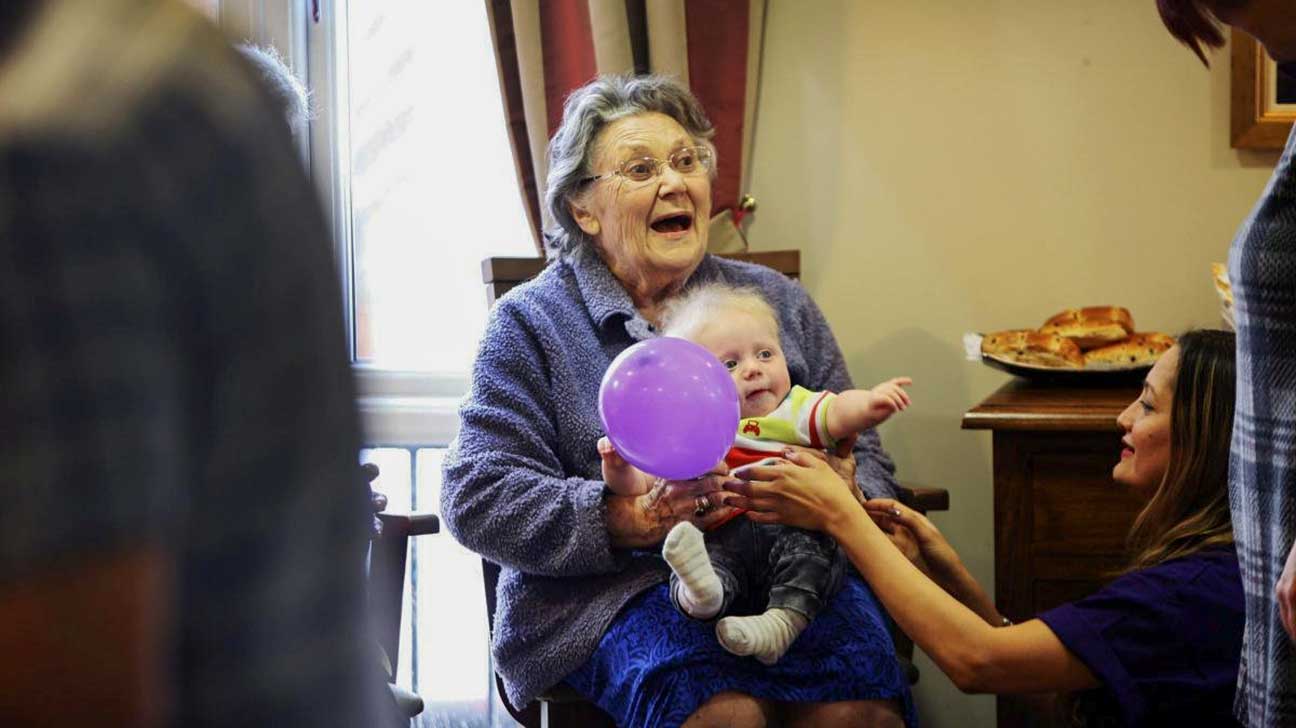 A daycare has started at a UK nursing home. | SWNS

Every midmorning, teachers at the ONEgeneration child care facility get ready for their daily visitors.

Each day, the center, located in Van Nuys, California, brings the two populations together for a host of activities designed specifically for children and seniors. These types of interactions serve a purpose. They’re collectively called “intergenerational programming.”

“Cooking, music, movement — you name it, they do it,” Kristine Vardanyan, director of ONEgeneration, told Healthline.

In the late morning, the seniors — many with varying stages of diminished cognition — head over to the different classrooms for an activity. Some days, the groups participate in music and movement. Other times they go out to the yard and blow bubbles or go on nature walks.

Vardanyan’s team of teachers takes great pains to plan out the details. Safety is the number one priority. For example, they need to make sure that the chairs all have armrests, because some seniors need them to transition from sitting to standing and vice versa.

Developmental needs are also carefully considered. On days that the two groups cook together, the recipes are usually easy to follow.

Roughly 160 adults are enrolled at ONEgeneration, although on any given day, about 60 attend the program. The child care facility has approximately 10 classrooms for children, from infants to age 6.

The rise of intergenerational care

ONEgeneration is part of a growing movement to promote intergenerational activities between the young and old.

While previous generations may have lived under the same roof or in the same town with younger generations of their family, that’s not the case today. Many extended families now live in different regions of the country. Additionally, people are living longer and may require more care than their family can provide, even if they live close by.

And a growing body of new research illustrates just how damaging isolation and loneliness can be.

Americans are living longer and healthier lives. Intergenerational advocates believe that we can only be successful in the face of our complex future if generational diversity is regarded as a national asset and fully leveraged.

There are many different forms of intergenerational programming, from seniors volunteering in schools to help children read to teenagers teaching a technology class at a senior center. A number of facilities across the globe take that concept even further.

In the United Kingdom, the Bridge House nursing home in Abingdon, Oxon, hosts a day care with a three-month waitlist.

The Jenks elementary school in Oklahoma is housed in a large complex that includes a senior living facility. Seniors here have multiple opportunities to volunteer in the classrooms.

When the community in Swampscott, Massachusetts, needed a new high school and senior center, they decided to build a structure that could hold both. Today, both populations share the space and often engage in joint activities.

Right now, there are approximately 105 shared spaces in the United States, according to Generations United. Activists would like to see more, but the concept is still foreign to many in this country.

In contrast, the United Kingdom has pledged to develop some 500 shared spaces with intergenerational programing by 2020.

Challenges of caring for both the old and young

The report, coordinated by Generations United and Ohio State University and supported by the Eisner Foundation, highlights a number of programs around the country that embrace shared spaces and intergenerational programming.

The report goes over the challenges behind creating such programs and compiled the findings of two surveys. One of the surveys asked the general population about the concept of intergenerational shared spaces, while the other asked programs already in place to provide details about what’s going on at their sites.

“It paints a big picture nationally and then more granularly at what’s happening in these programs,” Sheri Steinig, special projects director at Generations United, told Healthline.

Nearly two-thirds of those who responded to the survey think that senior centers, schools, and universities should create opportunities for youth and older adults to interact, while 89 percent believe serving both youth and older adults at the same location is a good use of resources. Almost 80 percent believe the government should invest in programs that bring those groups together.

“There’s a convergence of opportunity at hand, brought about by a variety of factors. The demand for quality children and youth services compounded with the increasing need for creative older adult programs creates an environment ripe for innovative age-integrated care,” states the report.

Butts notes that the United States has made great progress with multigenerational facilities, but we’ve yet to truly embrace intergenerational programming with the same verve.

“We haven’t really moved from multigenerational to intergenerational,” she said. “It’s really a matter of funders, policymakers, and local leaders.”

Steinig says they’ve talked to numerous people across the country who are interested in creating intergenerational shared spaces, but it’s often the funding streams that make it challenging.

Regulations tethered to both populations are also some of the biggest hurdles. Preschools have specific building codes, and senior centers have their own as well. Finding common ground to construct a site where both populations can prosper together isn’t easy, but it can be done.

“The programs that have been successful have basically sat down with both sides to work it out,” Steinig said.

Looking forward, she adds that the organization will begin to strategize the most effective opportunities for policy change and support.

“The time is right to find ways to connect our generations,” Steinig said.

At ONEgeneration, Vardanyan says there are clear examples of how the young and the old can learn and benefit from one another.

“The children learn about diversity and empathy. They are being exposed to different kinds of people,” she said.

In turn, the adults get a real kick out of hanging out with such life forces.

“They say the kids bring so much life and energy,” she said.