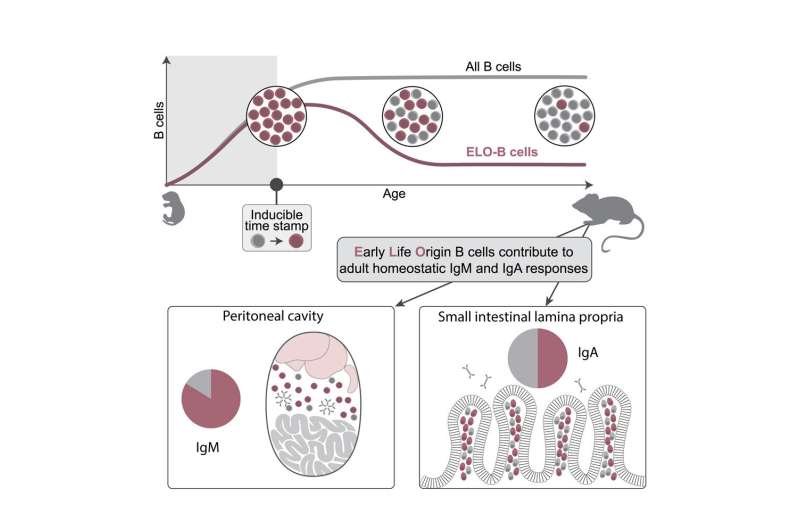 B cells and the antibodies they produce play an important role in our immune system, protecting us from the microscopic enemies that make us ill. Uncovering how they form and are “programmed” during development is key to better understanding the immune response to infections and vaccinations. A new study by researchers from Lund University in Sweden provides new insights into the origin and development of B cells in the body and in the gut, with implications for long-term immune health.

The immune system is our body’s first line of defense against an invading antigen, bacteria, or virus. B cells, a type of lymphocyte or white blood cell, play a key role in our immune response to these microscopic invaders. They release antibodies, specialized proteins, that lock on to intruder antigens, making it easier for other immune cells to attack and destroy them. A specific group of B cells, known as memory B cells, remember many of the microbes previously defeated, so that the immune system can quickly recognize and destroy them the next time they make their way into the body.

“We found that a substantial portion of adult B cells develop in the first days of life after birth. We hope the resolution of this time window of when B cells come to be will cause others in the field to reevaluate and interpret their results in a new way,” noted Joan Yuan, Associate Professor.

The idea that the immune system develops in layers is a long-standing theory: different immune cells arise at different times throughout development to form the adult immune system. For B Cells more specifically, the exact timeframe in which the biggest wave naturally emerges during normal development was previously unknown. To investigate how many B cells generated during different stages of life naturally remain in the body, researchers used genetic tools to stamp and map cells within a mouse model they developed.

By doing so researchers could visually study the immune system based on developmental timing, linking early life events with outcomes much later in life, and giving them new insights as to how this may also play out in the human body. Insights which are possible given that the human and mouse immune systems follow the same guiding principles, allowing scientists to study mice as a way to learn more about how individual genes can regulate human health and disease.

“Together with researchers from the immunology section at Lund University, we found that many B cells in the gut are also made during this early window of postnatal life and maintained in the adult. They exist in a mutually symbiotic way with microbes, where the B cells react to our gut bacteria, and the presence of the bacteria also promotes the maintenance of these cells,” said Stefano Vergani, postdoctoral researcher.

When it comes to B cells, the gut is home to a vast collection and is the largest site of antibody production in the human body. However, this collection of B cells remain somewhat mysterious compared to those in the lymph nodes or spleen, with the timeframe in which they form previously unknown.

Wanting to better understand how these early life produced B cells function, they introduced a model for rotavirus infection in mice. They found that antibodies produced by gut B cells, when exposed to rotavirus as a newborn, differ from those produced following exposure as an adult.

“Given the similarities in mammalian development our findings suggest that as adults, a significant portion of our B cells, both in the gut and elsewhere, are formed very early on in life. Where the first few days after birth could potentially be a time where our immune responses are programmed for the long-term. This means that early exposure to an antigen could possibly dictate the trajectory of our immune health and our susceptibility to disease and allergies later in life,” concluded Joan Yuan.