Binge drinking leads to alcohol tolerance by slowing down the how the brain communicates the feeling of being drunk, study finds

In recent years, there has been an alarming up-surge in binge-drinking in the US, particularly among teenagers and young adults.

Binge drinking on its own can kill you in one night and those with high alcohol tolerances have to drink more to feel the same effects, meaning they are inflicting more damage on their livers more quickly.

In research conducted on fruit flies, scientists at the University of Mississippi have discovered that ethanol, the active ingredient in alcohol, interferes with brain communication, in turn increasing alcohol tolerance. 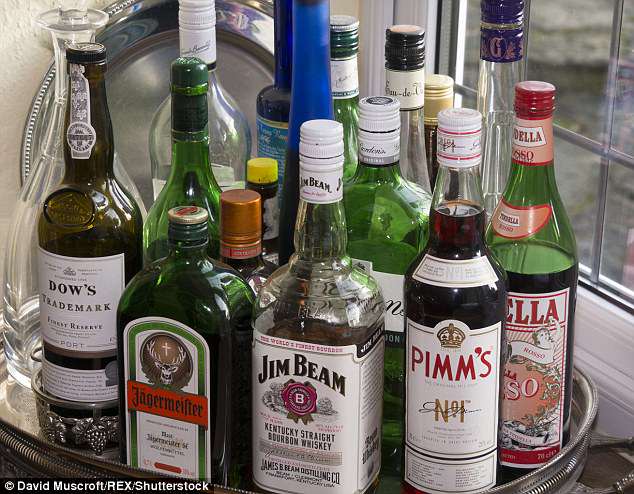 Binge drinking floods the brain with ethanol, interfering with signals for neurons to fire and slowing down the way the brain communicates the feeling of drunkenness to the body to increase tolerance, new research reveals

Every day, an average of six people die of alcohol poisoning fueled by binge drinking.

More than a quarter of all American adults report binge drinking – defined as drinking four or more drinks in the span of two hours – in the last month.

Consuming alcohol this rapidly can rapidly depress the nervous system, leading to plummeting heart rates and body temperatures and slowing the breathing to a dangerous rate.

Collectively, its symptoms can cause someone to fall into a coma, and even to die.

Even if a bender doesn’t turn deadly in a single nigh, however, its effects can be insidious and long-lasting, as the liver gets repeatedly inundated by alcohol and the brain begins to change in response to booze consumption.

The more often one does this, the more the brain becomes accustomed to high levels of alcohol, building a ‘tolerance’ to its effects.

Having a high alcohol tolerance means that the brain stops sending the normal signals the body that it’s time to call it a night.

Alcohol binds with opioid receptors in the brain, releasing a feeling of pleasure. But the more you drink, the more alcohol you need to activate enough of these receptors to get that rush of good feeling, or ‘buzz.’

Tolerance is one of the foundational stepping stones to addiction.

WHAT IS ALCOHOL TOLERANCE?

The more you drink, the less sensitive your body becomes to alcohol and its effects.

Because it is regularly exposed to alcohol, the liver takes not and prioritizes breaking down the substance by producing more of the enzymes that do this job.

Receptors in the brain respond to the frequent presence of alcohol by establishing a new baseline.

The pleasure receptors that respond to alcohol get overexcited, so the brain adjust by switching off the receptors to try to rebalance.

As a result, the same amount of alcohol that would have produced the feeling of drunkenness no longer does, and a person simply drinks more.

Alcohol also has powerful effects on the way that synapses in the brain fire and communicate, hence the often slow or strange responses of drunk people.

But the new research, published in the journal eNeuro, suggests that binge drinking’s particular influence on these synaptic firings contributes not just to the immediate symptoms of drunkenness, but to the long-term development of tolerance, too.

The University of Mississippi team had previously hypothesized and found evidence that ethanol interferes with a gene that produces proteins in the Unc13 family.

These proteins act as regulators for the release of neurotransmitters that fire off across the gaps between neurons in the brain.

In other words, the more of these proteins are present in the brain, the snappier its communication is. When there are fewer Unc13s, these connections lag.

For their new study, the research team suppressed the gene that codes for these proteins so that it was less active in fruit flies.

The genetically modified flies consumed a little more ethanol than their control counterparts, but took longer to show the effects of the substance – like getting drowsy.

Meanwhile, the scientists observed a secondary effect on these flies.

The more ethanol these ‘binging’ flies consumed, the less of another chemical, called diacylglycerol, was released. In turn, that interfered with neurotransmitter release, compounding the effects of ethanol on communication in the brain.

The sedation that getting ‘drunk’ should have caused kicked in even more slowly, and the effects were lasting, suggesting that binge drinking changes the brain in ways that build up tolerance to alcohol.