Home » Health News » How the Mail's 30,000 volunteers are helping on the NHS front line

Inspiring stories of the Covid helpforce heroes: From the welder supporting vulnerable patients to the hairdresser lending a hand on the wards… two years on, how the Mail’s amazing volunteers are helping on the NHS front line

Kenny is just one of the more than 30,000 amazing Daily Mail readers who signed up in response to our 2018 partnership with charity Helpforce to boost the number of NHS volunteers

Kenny Tucker is an extremely ebullient grandfather, from Billingham, Co. Durham, who spent 35 years working on the North Sea oil rigs as a welder until, five years ago, he was struck down by cancer of the tonsils.

‘Can you believe it?’ he says. ‘I mean … you don’t see that very often!’ So Kenny retired on ill-health grounds, embraced his cancer treatment at his local NHS hospital and has never looked back.

‘I’m as fit as a butcher’s dog now!’ he insists, grinning behind his splendid moustache.

‘Other than a bit of trouble with my legs.’ He is also very keen to give something back.

So, for the past 18 months Kenny, 66, has spent at least ten hours a week — usually much, much more — volunteering at the University Hospital of North Tees, supporting vulnerable patients through the fear of hospital visits with endless small kindnesses.

Sometimes, Kenny will be found in A&E fetching sugary teas, calling relatives, wheeling patients off to radiology and chatting about football, TV shows, the weather — anything to keep their anxious minds busy.

On other occasions, he’s perhaps just holding a hand, or providing a hankie — a silent solid presence, a friend, when otherwise there might be none.

More often, and kitted out in PPE, he’s providing a cheery taxi service, ferrying patients to chemotherapy appointments and home again — where he’ll see his charges safely back onto their own sofas, pop the kettle on and then bring them a cuppa. He’ll also check there’s food in the house and the heating is on.

‘I’ve been looked after by the NHS and I recovered, so I wanted to give something back,’ Kenny says.

‘And then I spotted the article in my Daily Mail and it changed my life, because helping other people keeps you warm inside — it’s like an inner fire that keeps you going.’

Kenny is just one of the more than 30,000 amazing Daily Mail readers who signed up in response to our 2018 partnership with charity Helpforce to boost the number of NHS volunteers. 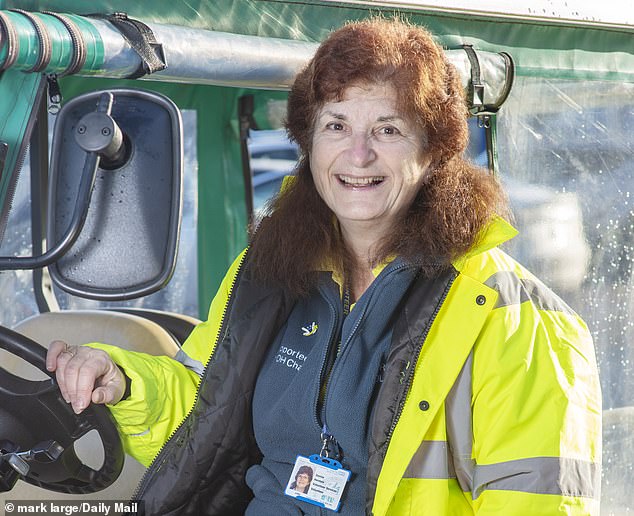 ‘The boost from the Daily Mail appeal was unbelievable,’ says Davina Kerstein, a retired chartered surveyor from Stanmore in London, who has been volunteering for four years and was helping out in the Royal National Orthopaedic Hospital’s volunteers’ office at the time

It was the biggest recruitment drive in Britain since the 2012 Olympics, backed by health unions and supported by everyone from Joanna Lumley to Simon Cowell, Theresa May to Prince Charles and Camilla. The impact has been extraordinary.

All across the nation, thousands of generous, kind and empathetic people, aged from 16 to into their 90s, pledged to help with a minimum of three hours a week or a day a month, for a minimum of six months.

‘The boost from the Daily Mail appeal was unbelievable,’ says Davina Kerstein, a retired chartered surveyor from Stanmore in London, who has been volunteering for four years and was helping out in the Royal National Orthopaedic Hospital’s volunteers’ office at the time.

‘There were so many new volunteers and they were all needed, because they take the pressure off the staff, and they make the patients happier and less anxious. They just make all the difference.’

It was a truly extraordinary reaction. In just a few weeks, 1.5 million volunteer hours were pledged by 30,000 new volunteers, with support racing in from politicians, royalty and celebrities. 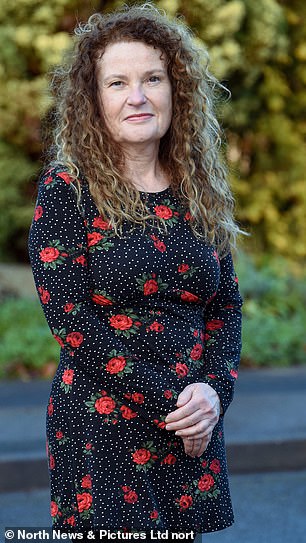 Tracey EwEn, 57, a hairdresser from Stockton-on-Tees, Co. Durham, is another Helpforce volunteer. She’d only just started volunteering on the wards when Covid struck and she was furloughed. ‘It has definitely helped my mental health,’ she says. ‘I love it, but I probably gained more than I gave because during lockdown it gave me a structure to my life and the feeling I’d made a difference’

And while there had been separate schemes in hospitals all around the country, now there was one central body ready to inform, train and support the volunteers.

Their contribution would include anything from chatting to anxious patients in A&E, to tending the hospital garden, transporting blood samples and breast milk, hand-holding during surgery, entertaining young patients on the children’s ward, assisting stroke patients with communication and helping heart surgery patients in the gym with exercise equipment.

To give an idea of the scale, one hospital alone — the South Tees Hospitals NHS Foundation Trust — had 533 very active volunteers at the beginning of this year.

And then, of course, Covid struck and everything changed.

Huge swathes of volunteers were forced to self-isolate due to underlying health conditions, or simply age. Many others were — rightly — cautious about spending time in our hospitals. In their place, thousands of people who had been furloughed from their jobs offered to help, temporarily.

Meanwhile, thousands of Helpforce volunteers pressed on, suddenly now in uncomfortable and unwieldly PPE, responding to different needs. Now they were helping organise Covid swabs, meeting and greeting at the hospital doors, checking everyone was masked and dishing out hand sanitiser.

Sewing and craft groups across the country have whizzed up hundreds of thousands of sets of scrubs and laundry bags.

Right now, many Helpforce volunteers are working 12-hour days, escorting patients to vaccination stations. Even when their own personal circumstances were exceptionally challenging. During the past eight months, Davina, 67, has been battered from all sides.

Back in April she lost her beloved brother Tony, 71, to Covid. Her daughter’s May wedding in Sitges, Spain, was cancelled and, of course, Davina hasn’t seen her all year.

Then in June, her husband Philip, also an NHS Helpforce volunteer, tripped during a walk and smashed his elbow so badly that the entire joint had to be replaced. It still isn’t right.

‘It has been a terrible year,’ she says. But none of that has made her step back from her volunteering commitments. If anything, it’s had the opposite effect, as she has upped her hours.

She now often works from 9am to 6pm, five days a week, doing everything from assembling PPE visors and goggles, to providing administrative support in the hospital’s Covid testing site and transporting patients around the enormous campus of the Royal National Orthopaedic Hospital NHS Trust.

‘You’ve got to keep going,’ she says. ‘You can’t go down. Volunteering helps — giving something back, helping other people — but it has helped me too, so much.

‘I couldn’t have got through my first month of mourning for my brother without the structure, the team, the purpose.’

Karen Oliver, 51, from Yarm, North Yorkshire, was inspired by the Daily Mail appeal and had been volunteering as a meal-time companion in a gastroenterology ward at her local hospital.

She now mentors new volunteers, helps with virtual bedside visits — working the technology so patients can chat to their families by video link — and chats with some of the more elderly patients.

‘Just knowing that we’re all human and sharing a smile and a hello can make all the difference,’ she says. ‘And remembering what is really important in life.’

Tracey EwEn, 57, a hairdresser from Stockton-on-Tees, Co. Durham, is another Helpforce volunteer. She’d only just started volunteering on the wards when Covid struck and she was furloughed.

‘It has definitely helped my mental health,’ she says. ‘I love it, but I probably gained more than I gave because during lockdown it gave me a structure to my life and the feeling I’d made a difference.’

As Dr Max Pemberton, an NHS psychiatrist and Daily Mail columnist, puts it: ‘Volunteers are the backbone of the NHS. Without them, I don’t think that the NHS would survive.’

Indeed, the scheme helps in myriad ways, but particularly by easing the pressure on overstretched hospital staff.

‘I don’t think people realise how much pressure the staff are under and how much they have to do,’ adds Davina.

‘None of them are in it for the money.’ According to a recent study covering all participating NHS trusts, a staggering 71 per cent of nurses say that the help of volunteers makes them feel less stressed in their work. Volunteers save nurses an average of 26 minutes each in every working day (based on nurses surveyed across the Helpforce programme).

It also makes a huge difference that the staff feel supported by cheery, upbeat people who have chosen to spend their precious free time here.

‘They’ve come with the aim of helping,’ says Debi McKeown, 49, a lead nurse in therapeutic support at South Tees Hospitals NHS Foundation Trust. ‘That alone speaks volumes. Many of them have their own jobs, too.

‘So we value them. We love them. We are really grateful. It is a real community.’ Karen Oliver works full time as a primary school teacher but she still manages to volunteer at the weekend, helping out with meals, feeding some of the patients, keeping others company — listening, chatting, and running errands to the hospital shop.

‘Once or twice on a Saturday morning, I’d think, “Ooh I could just lie in and be lazy,” but as soon as I step onto the ward, this thought vanishes. It’s just so lovely,’ she says.

It goes without saying that the volunteers transform the hospital experience for patients.

They are often frightened, anxious and, now more than ever, chronically lonely.

Which is all wonderful, but of course it is a two-way street.

So volunteers of all ages and backgrounds also make friends, gain a sense of purpose, have a laugh and feel good about themselves and other people. They also have higher wellbeing and happiness levels than the rest of the population.

On top of that, they learn about the NHS and what makes it tick and, more often than not, fall in love with its creaking glory. 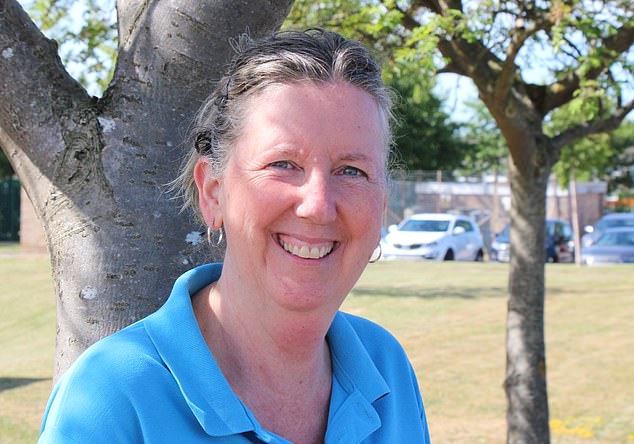 Karen Oliver, 51, from Yarm, North Yorkshire, was inspired by the Daily Mail appeal and had been volunteering as a meal-time companion in a gastroenterology ward at her local hospital

Over the years, the volunteer scheme has also acted as a very effective recruiting tool.

‘I know so many registered nurses, midwives, physiotherapists, occupational therapists who were volunteers first,’ says Debi, who has been nursing since 1994. ‘We’re brewing our own lovely, lovely community of workers.’

And that’s not counting all the teenagers considering nursing or medicine, or any number of hospital jobs, who come and give it whirl and get the bug.

(Some 58 per cent of people who volunteer say it has seriously increased their interest in working for the NHS.)

So let’s sing from the rafters about these otherwise unsung heroes of the health service and thank them — or, more accurately, you!

You brilliant Daily Mail readers have already given so much of your time, love, energy and generosity to support the NHS as it squares up to its greatest challenge yet.

And, for anyone still not sure whether to take the plunge and volunteer, please bear in mind Kenny’s wisdom.

‘Sometimes all you have to do is smile, or hold someone’s hand, or just be there,’ he says. ‘Because it costs nowt and the payback is priceless.’

To find out more about being a Helpforce volunteer, visit helpforce.community