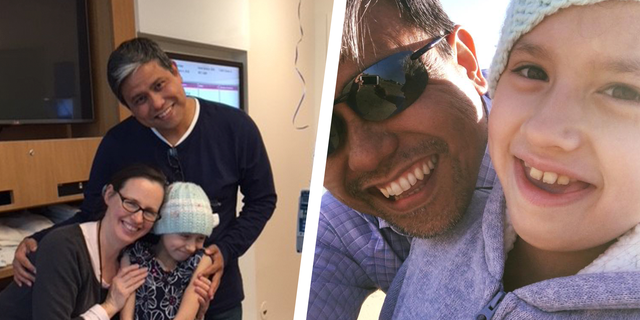 Every year, more than 15,700 kids in the United States will be diagnosed with cancer. This means there are tens of thousands of parents who are forced to navigate an incredibly complex healthcare system as they fight a battle that every parent dreads: trying to save their children’s lives. In honor of Father’s Day, we are highlighting the story of one of these parents: Moises Funtila, 48, whose daughter Katie had brain cancer.

A former Marine and Air Force member, Moises served in military hospitals as a medical care worker for 22 years. So when Katie, then 8, complained of painful headaches, nausea, and vomiting, his training led him to suspect that she might have a brain tumor. But doctors were quick to dismiss his concerns. Finally, in June 2017, the day after Father’s Day, Katie was diagnosed with a type of brain tumor called medulloblastoma.

Medulloblastoma is more common in children than adults and accounts for roughly 20 percent of all pediatric brain tumor cases. Symptoms include nausea, headaches, and vomiting, as well as a lack of balance. Usually, patients undergo surgery to have the tumor removed, followed by radiation or chemotherapy. Typically, the five-year survival rate after diagnosis and treatment is 70 to 80 percent.

After Katie was diagnosed, Moises quit his job as a bank manager to become a stay-at-home dad to his four other children, while his wife Kimberly accompanied Katie to Memphis, TN, where she received proton radiation therapy at St. Jude Children’s Research Hospital. While Moises and his wife managed to support themselves via his compensation from the VA and help from his church, as well as donations from a GoFundMe account, about 25% of parents of kids battling cancer lose up to 40% of their income, due to taking time off work and the medical costs of caring for a sick child.

This Father’s Day, MensHealth.com spoke to Moises about the challenges of parenting a sick child, the importance of being a “Google doctor,” and what Katie’s diagnosis has taught him about becoming a better father.

This interview has been condensed and edited.

In the later part of 2016, my youngest daughter Katie complained of not having dreams and of having headaches. An 8-year-old doesn’t complain of headaches continuously unless there’s something serious that’s going on. And it wasn’t just one time. It was practically every day. So I thought to myself, “This is alarming.” I had experience with another patient in the military who had similar symptoms, and eventually they did a CAT scan and found a brain tumor. So I told my wife, “I think this is brain cancer.”

We took her to the doctor right away. He thought she just had some other kind of thing going on and just sent her home. Eventually, he had her referred to a GI specialist because she started to have stomach pains, nausea, and vomiting. The GI specialist said he couldn’t really find anything.

Then I started seeing other symptoms in my daughter, such as her gait. She wasn’t walking straight. She was kind of veering to the left and veering to the right. I asked her to walk straight one time and she couldn’t do it. It was like trying to ask someone driving under the influence to walk a straight line and they can’t do it.

When her vomit started having blood in it, we ended up taking her to the hospital. I took pictures and video, and I showed them to the hospital staff. “Look, she’s got blood in her vomit,” I said. “This is serious now.” But nobody in that medical installation thought of doing a CT scan. We ended up going to the hospital four different times. They all thought it was GI issues as well.

The first time I went was on a Saturday. It was the day before Father’s Day. I didn’t want to feed them all my information and tell them what I wanted to have done. I know what it’s like to be a medical professional, when you listen to a patient and they’re telling you what you need to do. But I did kind of mention I thought maybe this could be brain cancer. They said, “No, no. The GI issues are there.”

Then Katie told my wife she thought she was going to die. My experience with patients in the hospital was, when they told me they were gonna die, they died within a few hours or within a few days. So I took that very seriously.

I left work immediately and took her to Stanford again. When I took her in, I told the doctor, “I’m not leaving until you do a CAT scan. There’s no way we’re leaving without a CAT scan tonight.” And he says, “You’re going to get your CAT scan. I believe you. We’ll look at this. We’ll rule it out.” I finally got somebody to have an ear to listen to me.

They put us in a special room. And then a little later, maybe half an hour, I notice the door opening, and I saw two different doctors. They were so solemn, and I said, “I know what you’re going to tell me. You found a mass in the back of her head, and it’s really big.”

They said it was five centimeters. And they said she needed surgery right away.

It was the day after Father’s Day. And I’d just been given the news that my daughter had brain cancer. I don’t even remember what we did that weekend for the holiday.

The surgery took place the next day. They started around noon and they didn’t end until around 8:30ish at night. When the surgeon came out, he had a smile on his face.

He told us, “I got about 98 percent of the brain tumor out. The rest of it can be dealt with other procedures that can combat it.” I hugged that doctor for a few minutes. I just knew we were in good hands at that point.

Katie was in the hospital for close to four weeks at Stanford because they couldn’t take her straight to radiation. During that time, we were discussing our options for the next step. And that’s when my wife’s aunt suggested looking into St. Jude Children’s Research Hospital. She said to look into proton therapy, because [it’s been proven to reduce] the side effects of radiation.

Stanford sent a tissue sample to St. Jude to determine if they could take the case and treat Katie. When St. Jude came back with their prognosis and said, “We have a 70 to 80% survivability rate for this particular kind of cancer,” I said there’s no question as to where we’re going.

[When Katie was first diagnosed], I blamed myself. I blamed the doctors. I blamed all these people. But then I realized, I didn’t need to blame anybody. I just needed to take care of my daughter and my family. So I quit my job at that point. I said, “I’m not going back to work. I’ll take care of the children, and do whatever needs to be done.”

I had three teenagers in the household with me. I was going to become Mr. Mom, but I imagined [myself as] a Mr. Mom that was also Batman: a little bit of toughness, a little bit of superhero, and a lot of love and caring. After I took on that role, I said to myself, “You know what? This is actually cool. I’m getting to know my kids.” I [had been] so busy with the military, and my job at the bank. All of a sudden, this thing happens and it brings my family together.

“I blamed myself. I blamed the doctors. Then I realized I didn’t need to blame anybody. I just needed to take care of my daughter and my family.”

We went to Tennessee to start treatment last July. We had to come back because my children were starting school in August, but my wife and Katie stayed until the treatment ended. They were at Target House, which is where the families of cancer patients stay for free during the duration of the treatments. She finally came home last February near her birthday. [Editor’s note: Katie’s dad said she is now healthy and cancer-free.]

Since then, Katie’s personality is the same. She still can’t really walk completely straight, but she’s walking way better than she was last year. We’re still getting her through physical therapy and speech therapy, because she still talks like she’s 6 or 7 now, which they’ve told us may be a side effect of having the cancer. She’s going to summer school, and I’m going to be doing my own form of school with her, to get her up to speed for fifth grade this coming fall. But she’s a really intelligent girl.

I’ve decided to change careers. I’ve been writing about my experience with St. Jude and being the Google doctor that you can be, because no one else is really going to care. It’s your daughter. It’s your son. You’ve got to be their advocate. And I’m going back to school now to become a doctor. I have a year and a half of pre-medical courses to take, and then I can take the MCAT next year and hopefully be in medical school by 2020.

“Be the Google doctor that you can be, because no one else is really going to care. It’s your daughter. It’s your son. You have to be their advocate.”

I’m really thankful for everybody that we’ve come in contact with, from Stanford to our local community to St. Jude. I’ve realized there’s this whole other world, and this experience also brought to light the goodness in people.

I remember when I was at St. Jude for the first time. Katie loves pancakes, so I asked the person there, “Where’s a good pancake place?” and she referred us to this place called Staks. We ordered this whole big menu for all of us, then they brought us the food and didn’t charge us. They just said, “Get well, Katie.” They were there for us. So many people. Father’s Day is going to be much different this year.