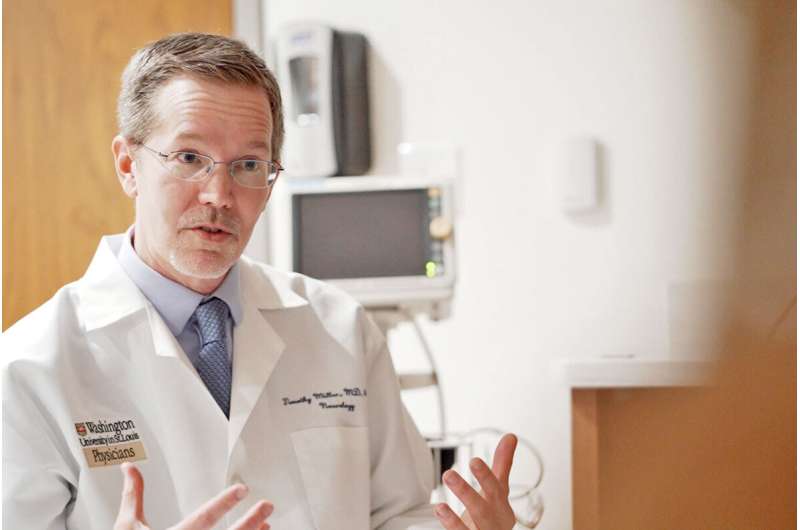 An investigational drug developed to treat a rare, inherited form of amyotrophic lateral sclerosis (ALS) reduced molecular signs of the fatal, paralyzing disease and curbed neurodegeneration—but at six months, the drug did not improve motor control and muscle strength, according to results from a phase 3 clinical trial led by researchers at Washington University School of Medicine in St. Louis.

However, the researchers found evidence that longer-term use of the drug may help stabilize muscle strength and control, a finding that the researchers called encouraging. The trial was sponsored by the pharmaceutical company Biogen, the maker of the experimental drug. The data are published Sept. 22 in The New England Journal of Medicine.

Participants in the trial carry mutations in a gene called SOD1that create a misfolded version of a protein by the same name, which leads to ALS, also known as Lou Gehrig’s disease.

The trial showed that the drug, known as tofersen, reduces levels of SOD1 and also neurofilament light protein, a molecular marker of neurological damage. At the end of the placebo-controlled part of the study, participants were offered the option to receive tofersen as part of an open-label extension that will last up to 4½ years. The establishment of the open-label extension created two groups of participants: those who had been on tofersen from the beginning, and those who had received a placebo for six months before starting tofersen. An interim analysis six months into the extension revealed a significant difference in motor function between the early and late starters. After a year on the drug, some participants showed a stabilization of muscle strength and control, a remarkable finding for a disease characterized by relentless decline, the researchers said.

The open-label extension is ongoing, and researchers continue to monitor the participants’ motor function. In July, the Food and Drug Administration accepted Biogen’s new drug application for tofersen as a treatment for ALS linked to SOD1 mutations.

“This is an exciting and hopeful step toward finding a therapy for SOD1-related ALS,” said principal investigator Timothy M. Miller, MD, Ph.D., the David Clayson Professor of Neurology at Washington University and co-director of the School of Medicine’s ALS Center. “We see clear evidence that the drug slows down the initiating factor—a SOD1 mutation—as well as the neurodegenerative disease process. We didn’t see substantial clinical improvement at six months, but the stabilization in function and strength at longer time points suggests it may take time for people to heal from the damage that has already been caused. The vast majority of people living with ALS experience a relentlessly progressive downhill course, so the stabilization of function during the open-label extension is truly remarkable.”

About 20,000 people in the United States are living with ALS. The fatal disease kills the nerve cells that control walking, eating and breathing. Few people survive more than five years after diagnosis.

Around 2% of ALS cases are caused by mutations in SOD1. Tofersen is an antisense oligonucleotide, a DNA-based molecule that interferes with the genetic instructions for building proteins. The molecule is designed to block production of the SOD1 protein.

The phase 3 trial was conducted at 32 sites in 10 countries and included 108 ALS patients with SOD1 mutations. Two-thirds (72) of the participants were randomly assigned to receive eight doses of tofersen over a 24-week period, administered directly into the fluid surrounding their spinal cords. The remaining 36 people received eight doses of a placebo. All participants underwent assessments at enrollment and at 28 weeks to measure motor function across four areas: swallowing and speaking; breathing; fine motor skills; and gross motor skills. They also gave samples of spinal fluid so the researchers could measure levels of ALS-associated proteins.

“The data published in the NEJM gives the ALS community great excitement and hope for treatments that can slow or stop the progression of the disease,” said co-investigator Merit Cudkowicz, MD, director of the Sean M. Healey & AMG Center for ALS at Massachusetts General Hospital. “The drug has the potential to improve the quality of life for people living with SOD1-ALS by stabilizing muscle function with longer-term use, which is an extremely promising development.”

“Most of the ongoing participants at our site have regained and/or maintained a number of their activities of daily living, and our exams and strength measurements corroborate their history of improvement, stabilization or both,” Bucelli said. “As a neuromuscular clinician, the privilege of witnessing this firsthand has changed the way that I think about this and other related, devastating neurodegenerative disorders.”

Although the results of this trial only apply to people with ALS caused by mutations in SOD1, they could inform research that may benefit people with other forms of the disease.