Keeping active in old age may protect against dementia – even if you have early signs of the disease, study says

Researchers say that senior citizens who moved more than average – be it from exercise or housework – had better memory and thinking skills than those who weren’t as active.

This was the case even if an elderly person was beginning to show early signs of dementia.

The team, from Rush University Medical Center in Chicago, Illinois, says the findings shed light on the age-related brain disease and could offer hope of treatments that slow down the progression of symptoms without the need for drugs. 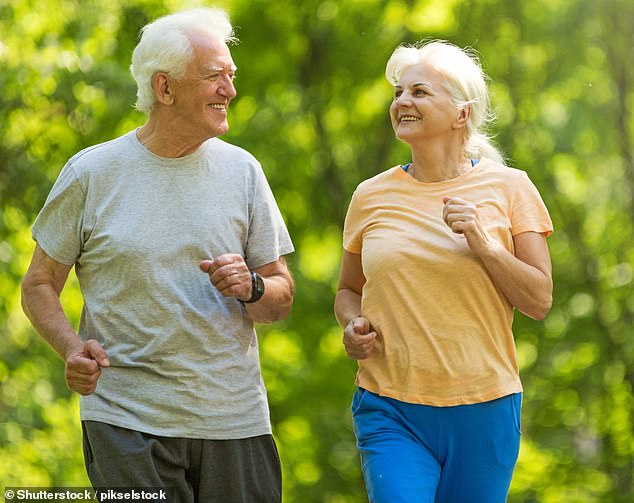 For the study, published in the journal Neurology, the team looked at more than 450 adults. Nearly 200 had been diagnosed with dementia while the rest had not.

The researchers had the participants undergo a physical exam, cognitive tests and memory tests once year over the course of 20 years.

About two years before the average age of death – around 91 years old – each adult was given an accelerometer.

The watch-like device monitors all types of physical activity and the intensity of the activity.

The team measured the data from the accelerometer over seven days and calculated participants’ final score in ‘counts per day’, a way of measuring energy expenditure

Those who had more counts per day performed better on the memory and cognitive thinking tests.

Researchers also found that the adults with better motor skills had higher scores on the tests.

‘People who moved more had better thinking and memory skills compared to those who were more sedentary and did not move much at all,’ Dr Aron Buchman, a professor in the department of neurological sciences at Rush, told DailyMail.com

‘We found movement may essentially provide a reserve to help maintain thinking and memory skills when there are signs of dementia present in the brain.’

He added that physical activity accounted for eight percent of the difference is n scores on the cognitive tests.

Researchers examined donated brain tissue upon the participants’ deaths  for hallmarks of either dementia or Alzheimer’s.

Such biomarkers include amyloid beta and tau proteins, which form clumps on the brain and smother neurons, leading to cognitive decline.

‘We wanted to see if decreased cognition might be able to show decreased levels of activity,’ Dr Buchman told DailyMail.com.

‘We found that the severity [of the biomarkers] did not affect the association between higher levels of activity and better cognition.’

Dr Buchman says more studies are needed to determine how much moving contributes to brain health but that the results of the new study are promising.

‘The findings are very exciting and empowering because it provides the ability for older people to take control over their lives,’ he said.

‘Any increase in physical activity or motor abilities, it looks like it can protect against dementia.’