Does your child have index fingers that are shorter than their ring fingers? It means they are SELFISH and less likely to share – and it’s all to do with one key hormone, finds study

Children who have index fingers shorter than their ring fingers are less likely to share their toys, research suggests.

Evidence already exists to show they are more aggressive – but the new study shows they are also more selfish – and won’t even share with friends.

It is known those who have an index finger that is shorter than their ring finger are exposed to greater amounts of testosterone in the womb because the hormone affects the development of finger length.

Anthropologists argue that higher levels of the hormone during pregnancy leads to a ‘masculinisation effect’ in both boys and girls. Testosterone levels remain high as children age.

Austrian experts observed the habits of dozens of boys and girls given the choice of who gets glittery stickers to make the conclusion. 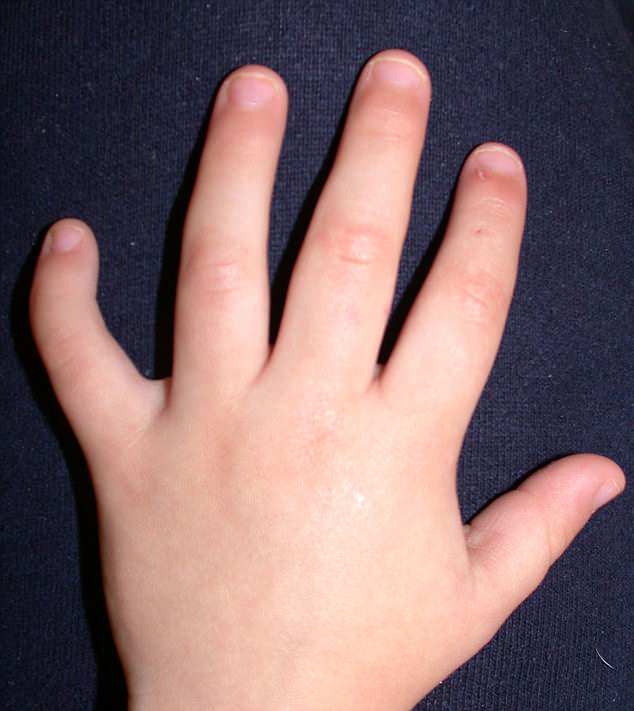 How was the study carried out?

Some 45 youngsters were asked to name their best friends in the class, to allow the scientists to see if that had an effect on the results.

And the children, who were all aged between six and nine, had the size of their index and ring fingers measured as part of the study.

Known as the 2D:4D ratio, scientists are able to analyse this to determine the levels of testosterone someone was exposed to in the womb.

Those who have an index finger that is shorter than their ring finger are exposed to greater amounts of testosterone in the womb.

While too much oestrogen for women makes the two fingers very similar in length, or the ring finger longer than the index finger.

The relative lengths of these two fingers are determined towards the end of the first trimester of pregnancy.

Children were either paired in the trial, conducted by the University of Vienna, with a friend or peer, or they took part alone.

HOW CAN YOU MEASURE YOUR 2D:4D RATIO?

For readers, there are several ways to figure out their 2D:4D ratio.

Respondents were asked to place their hands on a flat surface, palms facing upwards, and straighten out their fingers.

A researcher then measured the length of the index and ring fingers on both hands.

This measurement should be taken from the center of the fold between the finger and palm up to the very tip of the finger.

That way the upper lip of the caliper does not press against the finger.

The youngsters had to choose between receiving a sticker for themselves, or both them and their partner getting one.

What did the study find?

When in pairs, the children chose the latter option more frequently than they did if they were part of the experiment alone.

However, Dr Lisa Horn and colleagues observed a staggering difference when they analysed the results for prenatal testosterone levels.

They found children who were exposed to higher levels of the hormone in the womb shared the glittery stickers significantly less than their peers.

Writing in the journal Scientific Reports, the researchers were unable to confirm why this occurred in the study.

But they believe it may be because withholding resources from others is considered as a competitive, masculine strategy. Sharing is deemed more feminine.

Surprisingly, whether children were paired with a friend or just a peer had no effect on their desire to share the glittery stickers.

Studies also show high levels of testosterone in the womb may lead to an increased risk of ADHD, Tourette’s syndrome and autism.

While low levels are associated with a higher risk of developing diseases that are more common in women, such as anxiety and depression.