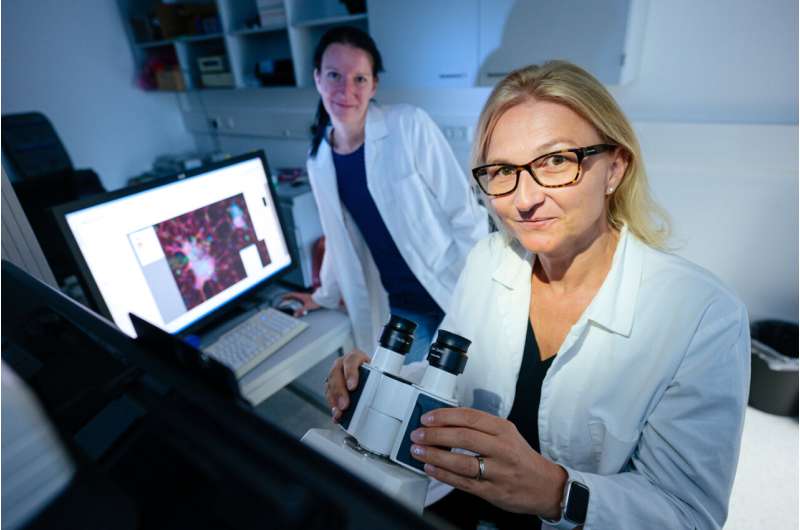 The human immune system is a thing of wonder. Up until now it had been widely assumed that the ability of killer T cells to destroy tumor cells and pathogens would deteriorate with age. It turns out, however, that the opposite is true—they become better killers, the older they get.

This surprising finding is the result of research conducted by the pharmaceutical scientist Dr. Annette Lis and molecular biologist Dorina Zöphel at Saarland University. Their work suggests that the T cells of older patients could be of particular value in cancer immunotherapy. The results of the study, which help us better understand how the human immune system ages, have now been published in Aging Cell.

The older someone is, the more likely they are to get cancer. According to Germany’s Robert Koch Institute, more than half of the approximately 500,000 people diagnosed with cancer every year are over the age of 60. As the coronavirus pandemic has shown all too clearly, viral infections tend to be more severe in older patients.

This was thought to suggest that the human immune system becomes weaker with age and that the same must therefore be true of the killer T cells that play such a critical role in fighting off pathogens. The job of the T cell is to track down and kill virus-infected cells or tumor cells in the body. Up until now the accepted scientific view has been that T cells function less effectively as they age.

However, researchers at Saarland University have now discovered that T cells turn into the ultimate killers as they get older. “We found the rather surprising result that the ability of cytotoxic CD8+ T cells to destroy tumor cells did not deteriorate but actually improved with age. When you compare the same number of young and old T cells, it is the older ones that are the better and more effective killers,” said Dr. Annette Lis, a qualified pharmacist who has been working for many years in the group led by Professor Markus Hoth at the university’s medical campus in Homburg.

The reason that T cells are such effective killers has to do with the highly effective weapons that they have at their disposal. “The production of the molecules perforin and granzyme is enhanced in older T cells. As its name suggests, the molecule perforin perforates the target cells making tiny pores in the cell membrane. Granzyme can then enter the cells and initiate apoptosis—a form of programmed cell death,” explained doctoral research student Dorina Zöphel.

In addition, older experienced T cells have an accurate picture of who they are supposed to be targeting. Cytotoxic CD8+ T cells have a good memory of who they have attacked and destroyed in the past. And as part of our adaptive immune system, they live and learn. “The T cells are able to form memory cells. If they come into contact with a pathogen that they are already acquainted with, they respond very quickly and very effectively,” said Dorina Zöphel.

For a long time, older memory CD8+ T cells were not thought to be particularly suitable for immunotherapy and they therefore found only limited use. In younger cancer patients, these T cells are extracted from the patient’s blood, trained in a Petri dish to fight the tumor cells and then reintroduced into the patient’s body to fight the cancer.

The results of the Homburg research group indicate that this type of therapy could also be very useful when treating older cancer patients. “Contrary to expectations, the use of older T cells in adaptive immunotherapy now looks to be highly promising, especially in the treatment of older patients, and this could potentially improve therapeutic efficacy and extend the patient’s life,” said Annette Lis.

But this begs the question as to why older people are not better protected against tumor cells and viruses if their T cells are so powerful. “Like most of the organs in our body, our immune system also ages continuously, and as it ages, its ability to respond effectively to new pathogens deteriorates. This aging process is referred to in medical research as immunosenescence and it describes the gradual decline in the performance of our immune cells as we age,” explained Lis. There has been insufficient research done to uncover the precise details of this aging process.

The work of the Homburg research group has now contributed one more piece to the puzzle of understanding these highly complex processes and interactions. “On the one hand we have age-related processes that occur naturally as the cell ages, but we also have to consider changes in cell function due to the aging of the cell’s environment. In the case of T cells, the evidence seems to suggest that the reason for the deteriorating immune response is not to be found in the T cells themselves but rather in the aging environment,” said Dr. Lis. As we age, the number of memory CD8+ T cells that are formed also declines, so that fewer killer cells are available to ward off attack by invading pathogens.

“Our results appear to indicate that the more powerful older T cells, which are able to eliminate pathogens or cancer cells more quickly, can compensate for other age-related deficits in elderly patients. So despite the fact that the number of T cells is generally lower in older patients, this smaller army of highly effective older T cells could still be effective in fighting cancer or viral infections. We are currently carrying out further studies to confirm this hypothesis,” explained Dörina Zöphel. The findings of the Homburg researchers could well provide the basis for novel future therapeutic procedures.