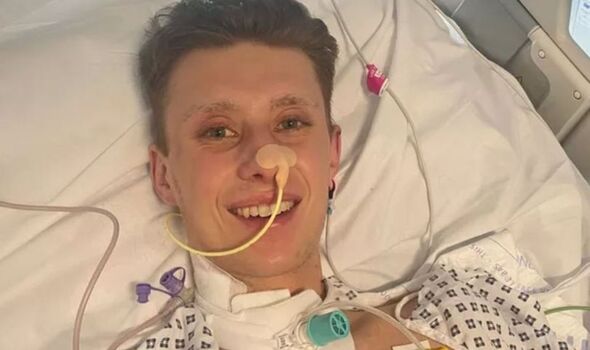 A young man is set to undergo a life-changing operation two days before his 21st birthday.

Levi Dewey is having both his lower legs amputated after contracting a form of flu, pneumonia, and later sepsis.

Levi’s family, from Willington, Derbyshire, said doctors told them he was one of the sickest patients in the country at the time and was given a 30 per cent chance of survival.

The 20-year-old lived an active lifestyle prior to falling ill, Derbyshire Live reports.

After finishing school he completed an apprenticeship for JCB before taking up a job there full-time.

But on December 7, 2022, he was taken to hospital with flu-like symptoms and breathing difficulties.

His condition deteriorated, and Levi went into septic shock and had multi-organ failure.

Doctors discovered he was suffering from influenza B and pneumococcal pneumonia.

His mum, Lara Dewey, 47, said: “We were told fairly early on that Levi could potentially lose his legs and need an operation, we were prepared for this outcome if it was to save his life.

“Obviously it’s going to be life-changing for everyone, but this is something we can work through as a family, and we have such a strong and positive support network.

“Levi has always had a positive mindset, and his glass is always half full.”

After taking a turn for the worse in Derby’s intensive therapy unit, Levi was transferred to Glenfield Hospital in Leicester to receive ECMO (extracorporeal membrane oxygenation) and full organ support.

Levi was gradually taken off organ support, and after 31 days, he was taken off a ventilator.

On January 9, Levi was moved back to Royal Derby for ongoing care, but two days later, he was informed that due to the severity of the sepsis he had contracted, he would need below-the-knee amputations on both of his legs.

Now, his family is fundraising to help the youngster walk again, and they have already raised more than £47,000 as of January 19.

Mum Lara, a child practitioner, said: “Initially, we were looking to raise £10,000, but as you can see, this has been exceeded, and the response has been extremely overwhelming.

“It’s overwhelming and emotional and we are all speechless.

“It’s amazing how supportive friends, family, colleagues, communities and also strangers have been towards this cause and also their generosity.

“Initially the money will be used to buy Levi a wheelchair and for home improvements, including ramps and showering facilities.

“Once he’s able to walk again we will look at buying him the best prosthetic limbs possible privately and any further equipment he will need.”