Women who follow the Mediterranean or so-called DASH way of eating are around 30 percent less likely to become deaf, a study found. The DASH diet is rich in fruit, vegetables and nuts.

Hearing loss affects around 48 million adults living in the US. 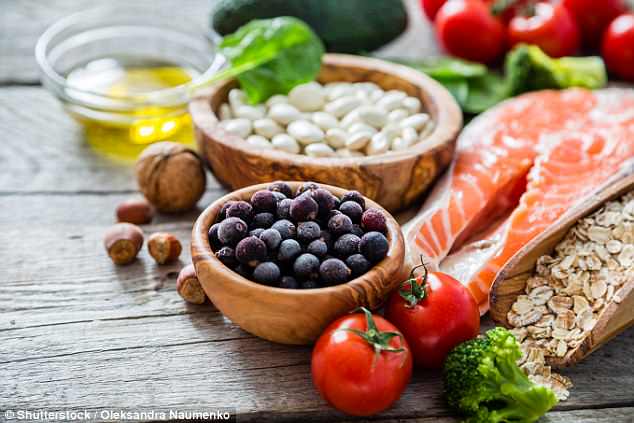 For more than half a century, hearing aids have been the only effective treatment for the millions of Britons struggling with deafness.

Yet they can be unsightly, uncomfortable and, in the eyes of some, label users as ‘old’ before their time.

As of January 2018, scientists are testing new drugs that could banish hearing aids for good for the estimated 900,000 people in Britain with moderate to severe deafness.

Two major clinical trials have started in recent months, which, it is hoped, will produce ground-breaking medicines capable of helping millions who cannot hear properly.

Both studies involve injecting experimental medicines into the ear with the intention of repairing the damage that caused the hearing loss in the first place.

Scientists at University College London’s Ear Institute are taking part in an international trial injecting a drug called a gamma-secretase inhibitor into the ears of 24 patients who have had partial deafness for up to ten years and use a hearing aid.

They believe the drug will restore hearing by stimulating the growth of healthy new ‘hair’ cells deep inside the ear.

In a healthy ear, sound enters the cochlea (a snail-shaped compartment inside the ear) and is picked up by sensory cells that resemble tiny hairs.

These hairs convert sounds into an electrical impulse that can travel along the auditory nerve to the brain.

These hairs can be damaged or destroyed by ageing, loud noise or infection and, until recently, it was thought it was impossible to regenerate them.

But laboratory tests at the Massachusetts Eye and Ear Infirmary in Boston in 2013 found that injecting gamma-secretase inhibitors into a type of cell called a progenitor cell led to the growth of healthy new hair cells. Progenitor cells are a form of stem cell that, unlike most stem cells, cannot develop into almost any form of body tissue.

The researchers, from Brigham and Women’s Hospital, Boston, analysed the effects of different diets and the risk of hearing loss in 70,966 women over 22 years.

The women’s eating habits were assessed every four years via food questionnaires.

Hearing loss was self reported by the participants in an online survey in 2012.

The DASH (Dietary Approaches to Stop Hypertension) diet is promoted by the National Heart, Lung, and Blood Institute to prevent and control hypertension.

The findings were published in The Journal of Nutrition.

A combination of the Mediterranean way of eating and the DASH diet maintains at-risk people’s thinking, reasoning and memories, a study found.

Followers of such eating habits, in a diet known as MIND, are required to consume nine foods or drinks regularly, including at least one portion of green leafy vegetables a day, berries twice a week and even a daily glass of wine, the research adds.

It also allows dieters to munch on sweets and pastries, providing they limit themselves to just four times a week, the study found.

When stroke survivors who suffered cognitive decline followed the MIND diet for up to 13 years, their risk of developing dementia significantly reduced, with researchers stressing such eating habits will also benefit the brains of healthy people.

Study author Dr Laurel Cherian, from Rush University, said: ‘The goal is to emphasize foods that will not only lower our risk of heart attacks and stroke, but make our brains as resilient as possible to cognitive decline.’