Female mice with more omega-3 in their diet after more likely to have offspring of a healthier weight and with more diverse gut bacteria, study finds.

Such mice are also more likely to have higher numbers of the bacteria Akkermansia in their guts, which is associated with weight lose in humans, the research adds.

Omega-3 is found in oily fish, such as mackerel and salmon, as well as walnuts and chia seeds.

Previous research suggests the supplement lowers the risk of inflammation, which is associated with obesity.

Omega-3 is also thought to ‘feed’ gut bacteria. A diverse microbiome has been linked to everything from better mental health to a healthier immune system. 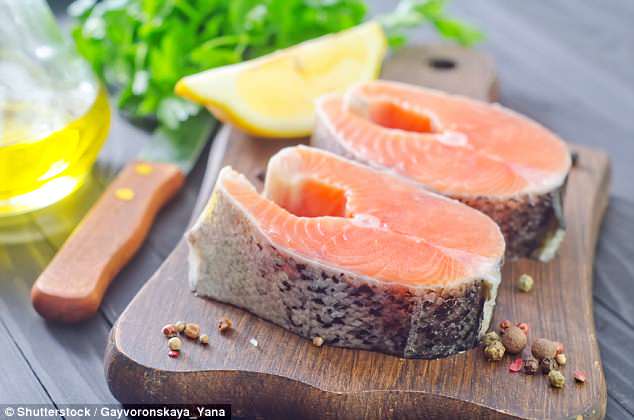 A bottle of water a day that boosts youngsters’ ‘good’ bacteria may combat childhood obesity, research revealed in June 2017.

Water containing a prebiotic supplement should make obese children a healthy weight after just one year, a study found.

This compared to a 17.6lb (8kg) weight gain among children receiving a placebo, the research adds.

Study author Professor Raylene Reimer from the University of Calgary, said: ‘Powdered fiber, mixed in a water bottle, taken once a day is all we asked the children to change, and we got, what we consider, some pretty exciting results – it has been fantastic.’

The researchers asked 42 obese or overweight children aged seven to 12 years old to receive either a prebiotic, known as oligofructose-enriched inulin, or placebo once a day for 16 weeks.

The prebiotic was a white powder mixed in water.

Prebiotics are indigestible food ingredients, such as fiber, that act as fertilizers to stimulate the growth of bugs in the digestive tract. Probiotics specifically introduce new bacteria into the gut.

‘If a mother eats more omega-3, she may help her baby maintain a healthy weight’

‘These results suggest that, if a mother eats more omega-3 fats and less omega-6 fats during pregnancy and breastfeeding, she may be able to help her baby maintain a healthy weight.

‘It may also help the right types of microbes grow in her baby’s intestines and form a healthy gut for later life.’

He adds further research is required to determine if omega-3 has the same effect on babies when eaten by pregnant women.

The researchers analysed mice that could covert omega-6 (an ‘unhealthy fat’) into omega-3, as well as ‘normal’ rodents.

All the animals were fed the same diet.

The scientists assessed the omega-6:omega-3 ratio in all the mice’s tails.

Results suggest the pups of the mice that can convert omega-6 to omega-3 gain less weight.

While those born to mothers with higher omega-6 levels are more at risk of developing conditions such as type 2 diabetes, as well as ‘leaky’ guts, which have been linked to chronic fatigue syndrome. 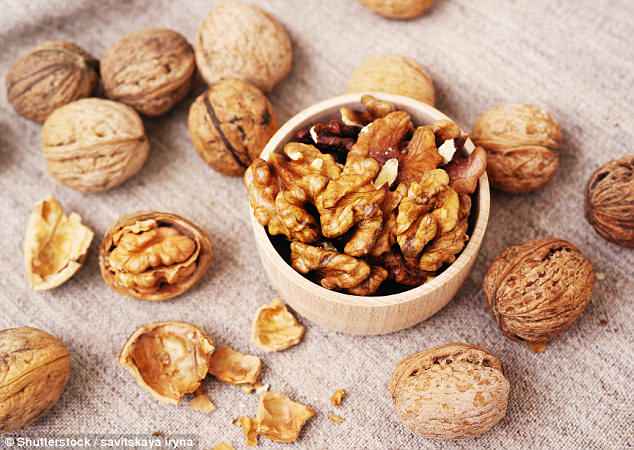 Omega-3 is also found in walnuts, as well as chia seeds and the oily fish mackerel (stock)

This comes after research released last April suggested diets drinks may not be healthier.

Artificial sweeteners, such as the controversial aspartame, are still linked to obesity and diabetes, a study found.

Speaking of the current study’s findings, lead author Dr Brian Hoffmann, from Marquette University, Milwaukee, said: ‘It is not as simple as “stop using artificial sweeteners” being the key to solving overall health outcomes related to diabetes and obesity.

‘As with other dietary components, I like to tell people moderation is the key if one finds it hard to completely cut something out of their diet.’