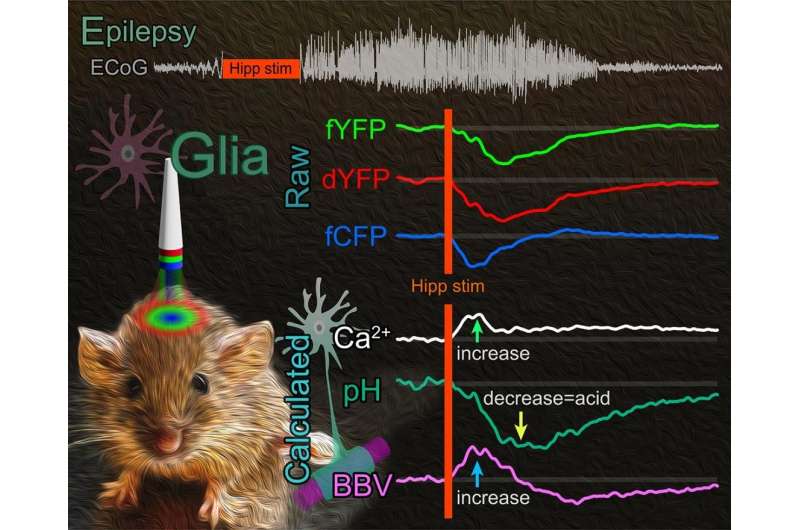 Researchers at Tohoku University have shown that astrocytes in the mouse brain exhibit an acid response with intensified epileptic seizures. The astrocytes’ acid response could lead to the amplification of excitatory neuronal signals and be the underlying drive for generating plasticity for epileptogenesis.

The findings were detailed in the journal Brain on November 25, 2022.

Cells in the brain can be divided into neurons and glia. Astrocytes are a major subtype of glia, controlling the local ionic and metabotropic environment in the brain.

To better understand astrocytes and the brain environment, fluorescent sensor proteins were genetically expressed in the astrocytes of mice. The researchers then implanted an optical fiber into the lateral hypothalamus of the mouse brain, to send excitation light and record fluorescence signals. By analyzing the signals recorded with this newly devised fiber photometry method, astrocytes’ activity was evaluated and critical components of local brain environmental changes were dissected.

Utilizing optical signals to gain insights into the living brain of experimental animals has been widely used in recent neuroscience studies. Despite occupying nearly half of the brain, astrocytes do not generate electrical signals, meaning traditional electroencephalogram studies, where electrical activity in the brain is measured with electrodes attached to the scalp, cannot be applied to study the function of astrocytes. Hence why the researchers turned to fiber photometry technology.

“Glia’s participation in the brain’s information processing, plasticity, and health has long been an enigma,” says Professor Ko Matsui of the Super-network Brain Physiology lab at Tohoku University, who led the research. “Our newly created fiber photometry method provides a gateway for understanding the physiology of glia in healthy and diseased living brains.”

The researchers were not the first to employ fiber photometry technology, but most previous studies have neglected the effects of local blood volume and cytosolic pH changes on the detected fluorescence signals. Lead study investigator Dr. Yoko Ikoma, Matsui, and their team, however, broadened the analysis of detected fluorescence signals to extract as much of the local environmental parameters as possible.

“This study could equal the feat of Hodgkin and Huxley in the 1970s,” adds Matsui. “They dissected the time course of Na+ and K+ channel activation from a single action potential waveform; whilst we were able to dissect the Ca2+, pH, and local brain blood volume changes from the detected fluorescence signals. The general goal of physiology is to untangle the detected signals and to unveil the essential truth behind what we can observe.”

Ikoma says that their technological breakthrough could be harnessed to understand the role of local brain environmental changes in many brain pathologies. “A therapeutic strategy designed to control astrocytes’ pH could potentially be used not only for treating epilepsy but also stroke or trauma-induced brain injury—even for memory enhancement in dementia treatment.”