The best reason to get an early night? People who sleep 8 hours have more orgasmic sex, top researcher says

There are plenty of reasons to get a good night’s sleep.

Snoozing for at least eight hours can help improve memory, curb inflammation and sharpen your attention.

But there’s another hidden benefit: those who get more sleep each night have more orgasmic sex.

Sex therapist and author Dr Laurie Mintz has found in her research that more shut-eye can lead to a greater increase in sexual desire and boost sex hormones such as testosterone. 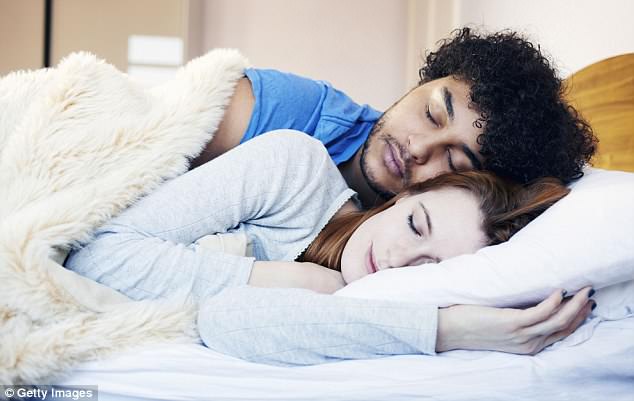 Dr Mintz, a professor of psychology at the University of Florida, has found over years of research that if you have problems with either sleep or sex, it can impact the other.

‘A good night’s sleep can increase interest in sex and a good sexual encounter can lead to a better sleep,’ she explains.

Her work is not isolated. A 2015 study conducted by the University of Michigan Medical School found that women who slept longer had more sexual desire the following day.

For every hour longer the women slept, the odds of having sex with their partner increased by 14 percent.

‘There’s so many women who say they’re struggling with low sexual desire,’ said Dr Mintz, who has written A Tired Woman’s Guide to Passionate Sex and Becoming Cliterate.

‘Women are balancing different demands whether it’s work or children. They feel tired and stressed out.’

Dr Mintz says there are two things that can be done to improve a woman’s sexual desire.

‘First, sex doesn’t have to happen during the night when you’re tired. Find a different time of day,’ she said.

The second is what the sex therapist calls the ‘just do it approach’.

They don’t realize that diminished sexual desire is to be expected and end up feeling something is wrong with them,

‘Reverse the equation because, once you do have sex, you’ll feel aroused and all those hormones will be released and you’ll feel good once you’re in the moment.’

Lack of shut-eye translates to lack of sex drive in both genders because it raises levels of cortisol, also known as the stress hormone.

While this can affect women, it has a particularly powerful effect on men’s libido.

Coupled with the fact that insufficient sleep also decreases levels of the sex hormone testosterone, the impact is significant.

A study from the University of Chicago looked at men’s sleep time and quality and found that men who slept four hours showed significantly lower T-levels than those who had slept eight hours.

The problem is that cortisol and testosterone work against each other, according to several studies.

Cortisol works just the opposite and induces muscle breakdown and visceral fat gain as well as slow down the immune system.

Not getting enough sleep could also diminish sexual functioning in men, Dr Mintz pointed out.

One study conducted at Donaustauf Hospital in Germany in 2009 found that men who suffer from sleep apnea are more likely to have erectile dysfunction and overall sexual dysfunction.

Just as better sleep can lead to better sex, the inverse is also true both immediate and in the long-term.

The reason is mainly biological. Post-orgasm, our body releases a hormone called oxytocin, also known as the ‘cuddle hormone’.

Oxytocin triggers sleepiness immediately because it counters the effects of cortisol.

Dr Mintz explains that the physical contact partners experience during sex can also help improve sleep in the long-term.

‘When you’re having physical contact, you feel reduced stress, which, in turns, helps you relax and therefore fall asleep,’ she said.

There are also gender-specific benefits to how good sexual intercourse helps us sleep.

In women, sex increases the levels of the hormone estrogen. Estrogen is a sleep-maintaining hormone and high levels of it have been shown to improve the quality of sleep, reduce time to fall asleep, and increase the amount of REM sleep.

The effect for women is long-term. There is a natural decrease of estrogen levels after women enter menopause, which is why post-menopausal women are more likely to suffer from insomnia.

For men, among the many hormones they release during ejaculation, one is a biochemical known as prolactin.

Prolactin levels are naturally higher during sleep, and research has shown that  animals injected with the chemical become tired immediately.