Hay fever is a common condition that’s caused by an allergy to different types of pollen, according to the NHS. Pollen is a fine powder that’s released by plants, and it contains proteins that can irritate the nose, throat and eyes. With around 20 per cent of the UK affected by hay fever, pollen count spikes could result in large numbers of runny noses and watering eyes. Around half of England has been forecast ‘Moderate’ levels of pollen today (Tuesday May 21).

The south-west of England, the south-east, and Yorkshire & Humber could all experience ‘Moderate’ pollen levels today, warned the Met Office.

Wales, Northern Ireland, Scotland, and the rest of England have a ‘Low’ pollen count, it said.

Today is expected to have the highest pollen count for the remainder of the week.

If you have hay fever, you’re more likely to develop symptoms if you spend time outside in areas of ‘Moderate’ pollen levels.

Pollen levels tend to be highest first thing in the morning and at the end of the day, according to charity Allergy UK.

So, if you do venture outside, it’s best to go during the middle of the day, and then to stay inside in the evening. 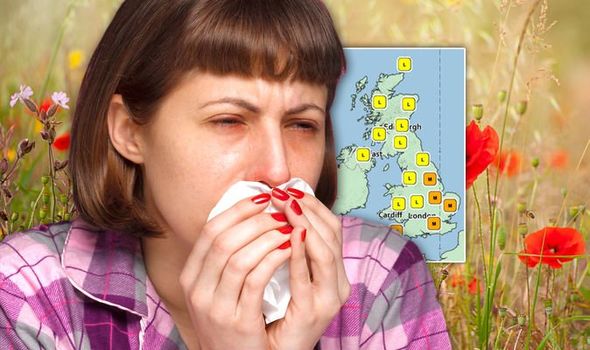 “Everyone loves to be in the garden on a sunny day, but for those with allergies it can make gardening, or just relaxing, a miserable time,” said the charity.

“Allergies cannot be cured, but avoiding contact with the allergen that triggers your symptoms may reduce the symptoms of the allergy.

“Pollen levels are at their highest at the beginning of the day, when they rise with the warming air, and at the end of the day when it’s cooling down.

“Counts will increase in dry warm weather, especially if it’s windy. So avoid going outside – and especially avoid strenuous activity – at these times. 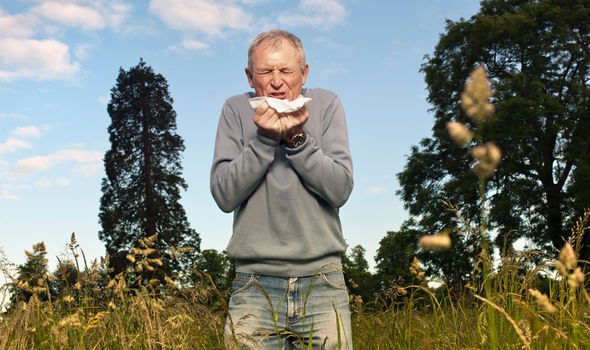 But symptoms vary from person to person, and the severity of symptoms depend on how much pollen is in the air.

Hay fever is a risk factor for developing asthma, and it can even significantly affect your work or school performance.

The condition can even cause some patients to develop breathlessness, nosebleeds, and even sinus pain.

You should speak to a doctor if your hay fever symptoms can’t be controlled by over-the-counter medication.