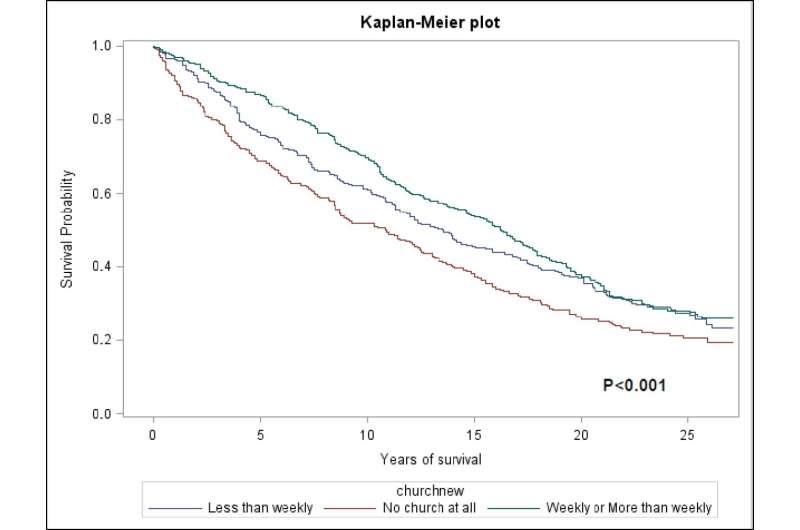 For men of color, faith-based organizations become increasingly important as they approach their senior years. Whether they’re members of a church, mosque, synagogue or other center of worship, Black men are discovering life affirming—and life extending—rewards of belonging to a community of worship.

A new study led by the University of Houston’s Marino Bruce suggests that regularly attending religious services may lower mortality rates for Black men in their 50s and older. These findings were recently published in journal PLOS One, in the article “Religious Service Attendance and Mortality Among Older Black Men.”

Using data from the National Health and National Examination Survey (NHANES), Bruce and co-authors observed trends suggesting that mortality risks decreased for Black men in their 50s and older who attended services at places of worship on a weekly basis.

Bruce, director of UH Population Health’s Collaboratories and an associate dean for research in the Tilman J. Fertitta Family College of Medicine, said that spiritual institutions are stress-free zones for Black men. Places of worship are often viewed within communities of color as sanctuaries where Black males feel safe and free of judgment or suspicion.

“Black men have been oppressed, commodified, surveilled and criminalized like no other group in U.S. history and they often experience disproportionately high levels of social and psychological stress from structural racism, institutional discrimination and unfair treatment from early childhood through late adulthood,” Bruce and collaborators reported in the article.

Stressors such as this have a significant impact on Black men’s health, Bruce said.

“Churches and similar institutions represent a safe space,” he said. “They receive affirmation, and the messages delivered are intended specifically for them.”

Within the sample observed by Bruce and researchers, 36.4% of respondents reported attending religious services at least once weekly; 31.7% attended at least three times or fewer monthly; 31.9% did not attend at all. Other findings indicated that respondents attending services at least once weekly had better health profiles than those who attended less frequently or did not attend. Likewise, the sample of regular attendees had a higher percentage of non-drinkers and non-smokers.

While religious institutions provide a safe space for Black men, Bruce and researchers concur that Black churches in particular provide members with an environment conducive for social and spiritual bonding. They also have an enhanced connection with those communities they serve.

“Black houses of worship have traditionally been centers of advocacy,” he said.

“Churches and church leaders have a history of being catalysts for social change that has transformed the lives of African Americans and other marginalized populations. Churches have been at the center of efforts to improve the daily lives of community residents by providing information related to jobs, health, recreation and general well-being. These institutions have launched educational institutions, including several Historically Black Colleges and Universities, and have even served as community health centers. Black houses of worship have offered and continue to offer resources that touch individuals and their loved ones during every phase of life.”

Ultimately, African American institutions of worship provide much more than spiritual support, Bruce said. For men 50 and older, the additional resources become more relevant as they advance in age.

Bruce and collaborators also point to the powers of both prayer and positivity as they relate to health. In the article, they cite studies suggesting that prayer and meditation reduce cardiovascular disease risks, treat post-traumatic stress disorder and potentially improve mortality rates.

Bruce is quick to admit that places of worship are not antidotes or cure-alls, but can be therapeutic for individuals at multiple levels.