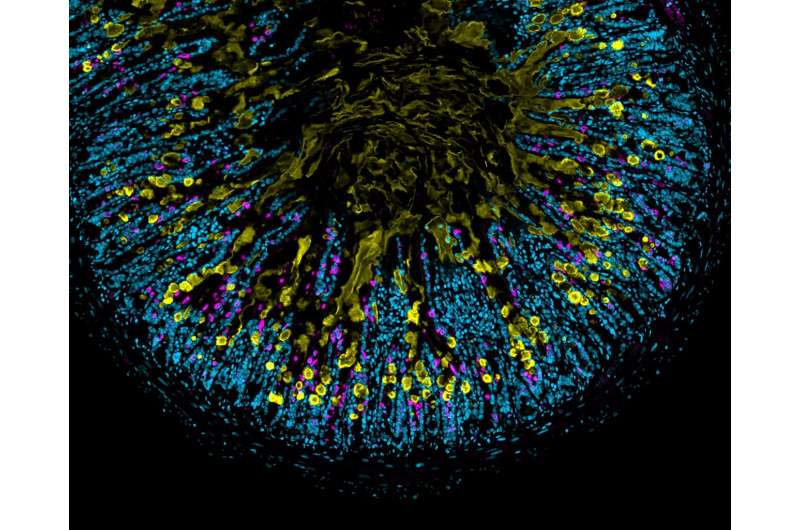 Inflammation and increased mucus production are typical symptoms of worm infections and allergies. This immune response involves our innate immune cells, but their exact functions are not yet fully understood. A research team from Charité—Universitätsmedizin Berlin has now shed light on the key tasks that these cells perform. In the study, which has been published in the journal Nature, the researchers also identify potential therapeutic approaches for the treatment of allergies.

The cells of the innate immune system are located in the mucous membranes of the respiratory tract and the intestine, where they form a first line of defense at the point of entry for pathogens. These cells include group 2 innate lymphoid cells (ILC2s for short), which are active in the intestine in the case of parasitic diseases, and in the respiratory tract in the case of allergies.

“Innate lymphoid cells were discovered a decade or so ago and we already know a lot about them, but their exact function in the machinery of the immune system is not yet completely understood,” explains Dr. Christoph Klose, who heads the Emmy Noether Independent Junior Research Group on the regulation of type 2 immune responses by neuropeptides and neurotransmitters at the Institute of Microbiology, Infectious Diseases and Immunology at Charité.

“There is a group of adaptive immune cells—namely the T cells—that carry out some similar functions as part of the type 2 immune response, so it was previously thought that the role of ILC2s may be redundant and could be easily taken over by the T cells.”

However, the recently published study has now disproved this theory. Using an animal model and state-of-the-art molecular methods such as single-cell sequencing, which allows scientists to zoom into individual cells and analyze their molecular state, they have shed light on the central functions of ILC2s.

“A certain type of immune cells called eosinophils were not able to develop properly when ILC2s were absent,” explains Dr. Klose. “This relationship was previously unknown and came as a big surprise.”

Eosinophils are involved in inflammatory processes in the tissue. The scientists also found that ILC2s have a major effect on the ability of epithelial cells to promote mucus production and expel parasites, such as worms, from the body. “The absence of ILC2s was clearly noticeable in our tests examining the immune response to worm infections. There was only limited mucus production in the tissue and the parasites could no longer be combated effectively,” says Dr. Klose, summarizing the results of the study.

In further experiments, the researchers examined the symptoms of allergic asthma and found that these improved when ILC2s were absent.

“This could be a starting point for future studies aimed at developing potential allergy therapies,” says Dr. Klose.