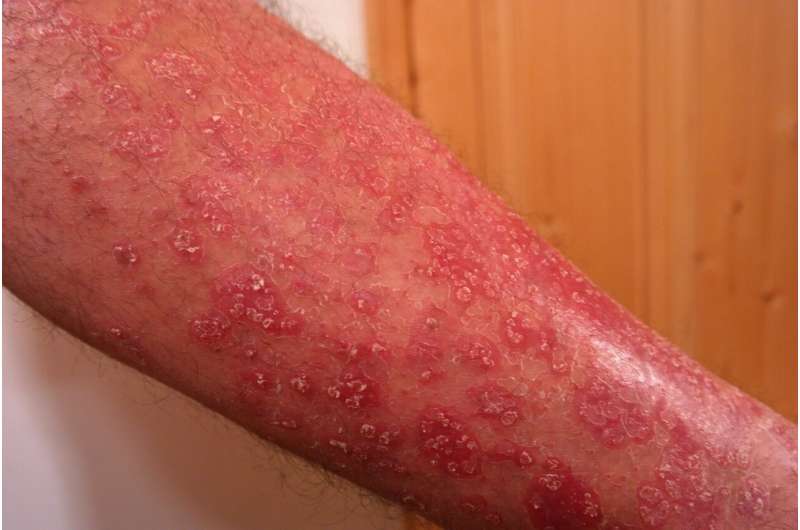 Millions of people suffer from psoriasis, a chronic, autoimmune disorder that causes scaly patches on the skin and often precedes psoriatic arthritis. While no cure exists, treatments range from topical creams to injected medications that block inflammation. To improve treatment options, scientists need to better understand the dysregulation of the immune system that leads to these lesions.

Using advanced computational genomic analysis of immune cells from mouse models, a researcher at the Pritzker School of Molecular Engineering (PME) at the University of Chicago and her collaborators discovered that, when exposed to a trigger, certain kinds of immune cells change their behavior in unexpected ways to produce the protein signals that cause lesions.

The results were published recently in the journal Nature.

The researchers, which include collaborators at Yale University and the Broad Institute of MIT and Harvard, set out to better understand innate lymphoid cells (ILCs), immune cells that reside in barrier tissues, such as the skin and lining of the gut. Though not as numerous as T-cells—which play a central role in the body’s adaptive immune response—ILCs rapidly sense, integrate, respond to, and propagate signals, thereby modulating downstream immune responses.

Previous studies observed a specific type of ILCs in skin lesions and proposed their importance in driving psoriasis, but the origins of these ILCs and their role remained unclear. To find out what their role was, the group used a combination of advanced experimental and computational approaches.

Experimentally, the researchers stimulated skin inflammation in mouse models using interleukin-23 (IL-23) – a cytokine implicated in causing psoriatic lesions. Even in mice lacking all T-cells, ILCs could still drive psoriasis. The scientists isolated thousands of ILCs from the skin of mice over the course of disease induction and profiled the gene expression of these cells individually using single-cell RNA-sequencing.

Riesenfeld and her collaborators then used machine learning techniques on this high-dimensional gene expression data to quantitatively model the behavior of ILCs before and in response to IL-23 treatment.

They found that ILCs were engaged in a spectrum of activities, unconstrained by previously identified roles. Their models suggest that ILCs across this spectrum have a plasticity that allow them to respond to IL-23 signaling by changing programmed actions, normally considered a stable part of their identities, to produce the pathogenic cytokines that induce skin lesions. The scientists experimentally validated these predictions, using genetically altered mice that allowed the tracking of ILC fates.

“These findings tell us something new both about how psoriasis arises and about how an inflammatory trigger can change the behavior of immune cells,” Riesenfeld said. “We now think about the identities of ILCs cells as more flexible and less predetermined than we used to. That is, cells that are predisposed to play one role may do something very different under duress.”

A new approach to understanding the immune system

The combined experimental and computational approach can be used to characterize not just one gene or protein, but whole transcriptional programs of individual immune cells, which can, with the appropriate analysis, offer valuable insights into immune response patterns.

“Understanding how heterogenous cells integrate and are transformed by immune signals is central to addressing fundamental health-related questions, such as why one person responds to a stimulus with an inflammatory reaction, while another tolerates it,” Riesenfeld said.