You don't have to be a tree-hugging greenie to understand the importance of forests for life on Earth: as giant vacuum cleaners for sucking up carbon dioxide, as store houses for myriad ecosystems. But increasing evidence points to them having a more subtle effect as barometers of our mental well-being. With humans becoming more divorced from nature than ever, particularly with our addiction to screen technologies, there may be a long-term cost to our mental health. 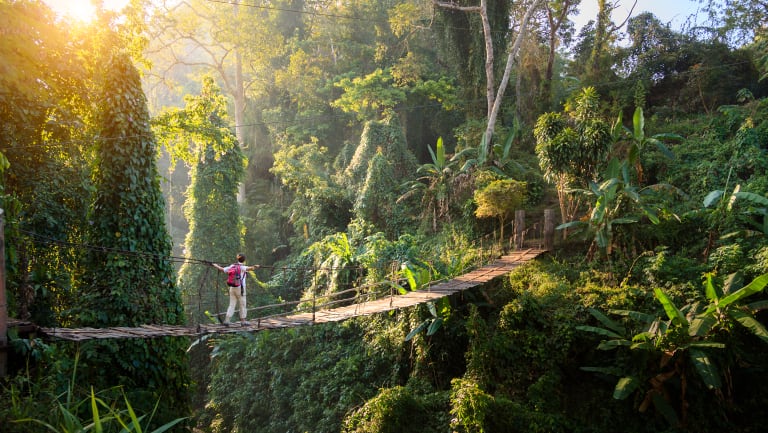 Walking among trees has been found to have positive effects on immunity, blood pressure and stress levels.

In his 2005 book Last Child in the Woods, American journalist Richard Louv coined the term "nature-deficit disorder" to describe humanity's growing separation from nature. "Much of society no longer sees time spent in the natural world as enrichment," bemoans Louv, who has toured Australia speaking about this issue. "Technology now dominates almost every aspect of our lives. This is not, in itself, the enemy, but our lack of balance is lethal."

Exposure to the natural world is especially important for children, he notes. "Studies strongly suggest that time in nature can help reduce the symptoms of attention deficit hyperactivity disorder, calm kids and help them focus. Schools with nature-learning areas appear to help children do better academically. There are some indications that natural play spaces can reduce bullying and be a buffer to child obesity."

In case you're thinking this is eco babble, visit Japan. In 1982, the Japanese forestry ministry promoted the concept of shinrin-yoku ("absorbing the forest atmosphere") to describe how walking among the trees enhanced health and contentment. After an eight-year study, scientists concluded that it showed positive effects on immunity, blood pressure and cortisol levels.

Can a walk through a city park provide a healthy jolt of shinrin-yoku? "Any green space will provide some benefit," says Louv. A University of Melbourne study in 2015 backs him up, finding that "green booster breaks" – as brief as a 40-second glance out of a window at trees and vegetation – can increase concentration and energy reserves.

To read more from Good Weekend magazine, visit our page at The Sydney Morning Herald or The Age.