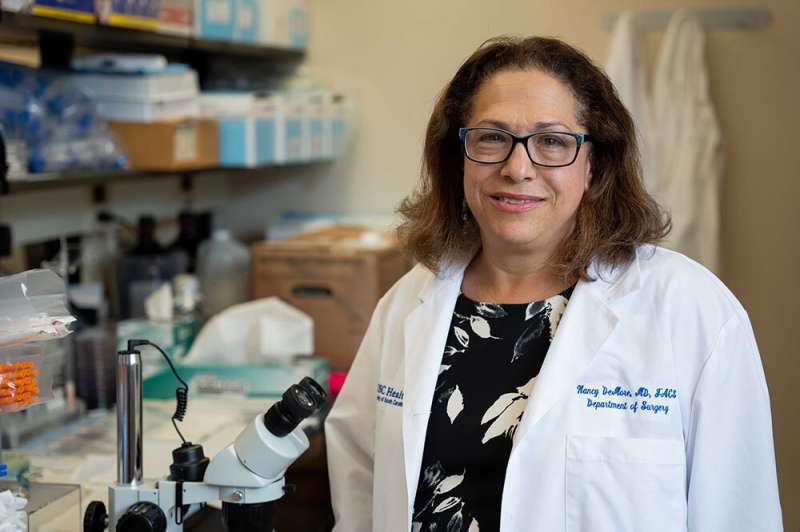 In a cancer that has not seen new targeted therapies for over 20 years, MUSC Hollings Cancer Center researcher and oncologist Nancy Klauber-DeMore, M.D., is pioneering new discoveries.

Using a combination of personal passion and expertise, Klauber-DeMore shifted her knowledge of the pro-angiogenic protein SFRP2 in breast cancer to address the lack of treatment options for patients with aggressive metastatic osteosarcoma. The results of the combination treatment with SFRP2 and PD-1 antibodies in a preclinical model were published in Cancers.

Osteosarcoma expert William Tap, M.D., chief of the Sarcoma Medical Oncology Service at Memorial Sloan Kettering Cancer Center said, “Osteosarcoma is an area of great unmet medical need which unfortunately has seen few clinical advances in the last 30 years. The work of Dr. Klauber-DeMore and colleagues, which targets SFRP2, provides a spark of hope in creating novel clinical inroads against this terrible disease while providing unique insight into the application and effects of anti-SFRP2 therapies in cancer.”

One focus of clinical research for Klauber-DeMore, a surgical oncologist and the BMW Endowed Chair in Cancer Research at MUSC, is centered around understanding how tumors hijack the development of new blood vessels, a process known as angiogenesis, to fuel their own growth. Tumors need to develop their own blood supplies to facilitate the exchange of nutrients. Blocking the angiogenesis-promoting molecules that tumors secrete has been a cancer treatment strategy for over a decade.

According to Klauber-DeMore, VEGF, the first angiogenesis factor that was targeted with an antibody, does not always slow cancer growth. “A decade ago, while I was exploring the issue of targeted VEGF treatment failing, I realized that there must be other factors promoting angiogenesis that overcame the lack of VEGF. My research in human breast cancer led me to the protein called SFRP2, which also promotes new blood vessel growth in cancers,” explained Klauber-DeMore.

While breast cancer is Klauber-DeMore’s specialty, both in the clinic and in the lab, personal experience and scientific discovery led to her research in pediatric osteosarcoma. In 2015, Weston Mallard, the son of close family friends, was diagnosed with osteosarcoma the week before he started eighth grade in Durham, North Carolina.

Osteosarcoma is a bone cancer that has a particularly poor prognosis once the cancer spreads to other organs. “Immunotherapy is one of the newer and more promising therapies for many cancers; however, it is not effective in osteosarcoma and effective treatments are lacking,” said Klauber-DeMore.

Weston’s mother, Jennifer Mallard, said it was a horrible time. “Weston was started on treatments right away. They were awful. They made him so sick. This disease really destroyed his life from the beginning.”

Sadly, Weston passed away in 2017 after the cancer metastasized to his lungs. “It is easy to remember how I felt when we got to the point in the treatment where there was nothing to do. A year into the treatment, even though we had a great team of doctors at UNC, there were no promising treatment options left for him,” said Mallard.

“Not being in the medical field, we did not want to jump to conclusions. But it felt like everyone was talking about adult cancers and the advancements. But no one was talking about pediatric cancer advancements,” said Mallard. This painful journey and the lack of options resonated with Klauber-DeMore. Weston was one of her daughter’s best friends.

During Weston’s battle with osteosarcoma, Jason Yustein, M.D., Ph.D., at Baylor College of Medicine, published research showing that SFRP2 may be a therapeutic target in osteosarcoma. Klauber-DeMore contacted Yustein and started a collaboration to study the use of Klauber-DeMore’s novel antibody, hSFRP2 mAb, in a preclinical metastatic osteosarcoma model.

The team’s research revealed the role of SFRP2 in immune cells, which are becoming an important counterpart in improving cancer treatments. The addition of the SFRP2 molecule causes an increase in two molecules, CD38 and PD-1, on T-cells. Klauber-DeMore’s hSFRP2 mAb stopped the increase of CD38 and PD-1 on T-cells.

One of the paper’s co-authors, Hollings Cancer Center researcher Shikhar Mehrotra, Ph.D., previously found that PD-1 immunotherapy is not effective when there are high CD38 levels on T-cells. Blocking CD38 allows PD-1 immunotherapy to work.

“A previous study showed that PD-1 immunotherapy did not work in osteosarcoma. We now know that osteosarcoma produces a lot of the SFRP2 molecule, which causes an increase of CD38 and PD-1 on the T-cells,” said Klauber-DeMore.

“We found an additive beneficial effect using the hSFRP2 mAb and PD-1—the combination blocked metastasis in our preclinical osteosarcoma model.” Since SFRP2 is mainly on active T-cells and tumors, there is the hope that this combination treatment will be well tolerated and effective, she said.