Home » Health News » Struggle to diet? Lack of a specific brain tissue may be to blame

People who struggle to stick to a diet appear to be missing grey matter in the part of the brain linked to willpower, say scientists

People who struggle to stick to a diet may be able to blame their brain tissue, new research suggests.

Those with less grey matter in the region of their vital organ that controls willpower have poorer self control when faced with fattening foods.

Grey matter contains most of a brain’s cells and is involved in muscle control, speech, memory, emotions and decision making.

Future experiments are required to determine if areas of the brain can be trained to boost people’s willpower and if this leads to higher levels of grey matter. 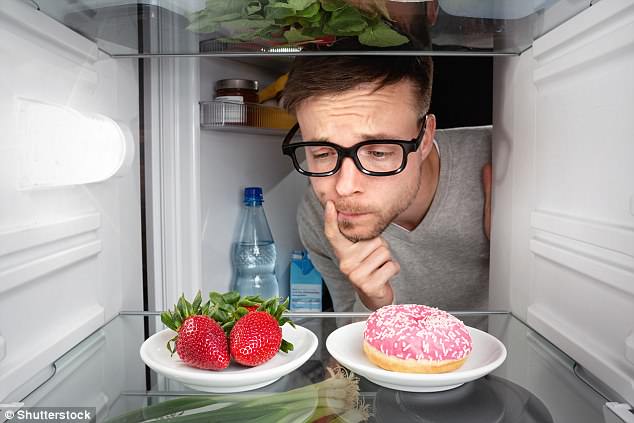 In the first part of the experiment, the researchers analysed three studies that assessed the grey matter of 91 people.

While inside an MRI machine, the participants were told to either ‘consider the healthiness’, ‘consider the taste’ or ‘make the decision naturally’ regarding images of food displayed on a screen, such as yoghurt or biscuits.

They were asked to rate on a scale of ‘strong no’ to ‘strong yes’ how much they wanted to eat the food.

In the second part of the study, the researchers analysed a new set of participants who were also shown food images while having an MRI scan but were told to either ‘distance’ themselves from the food, ‘indulge’ or ‘make the decision naturally’.

In both experiments, the participants’ grey matters were assessed.

The findings were published in the journal JNeurosci.

They add that no single food acts as a ‘silver bullet’ for improving or maintaining brain health.

The experts have put together the following diet and lifestyle advice to help people preserve their brain health as they age.

Include the following in your diet:

Red meat consumption should be limited

Eleven researchers from the Global Council on Brain Health, including experts from the University of Exeter, met on September 12-to-13 2017 to discuss the impact of diet on the brain health of adults over 50.

Their recommendations are based on the evaluation of studies investigating the impact of nutrients on the cognitive function of older adults.

Sensor worn on teeth records what people eat in a day

This comes after research released last March suggested a new sensor worn on teeth could aid dieters by recording what a person eats or drinks in a day.

The sensor, which is mounted directly on to a tooth and connects wirelessly to a user’s mobile phone, records information on their sugar, salt and alcohol intakes, a study by Tufts University found.

The researchers believe the device may help people manage their nutritional inputs, leading to improved health and diet outcomes.

Such sensors could also be used to monitor dental health, as well as potentially collecting saliva samples to measure wellbeing complications, such as fatigue, they add.

Measuring just 2x2mm, the device overcomes previous limitations of such technologies, including requiring users to wear a mouth guard, and adheres well to uneven teeth surfaces, according to the researchers.

It is unclear when such a device may be available for public use.