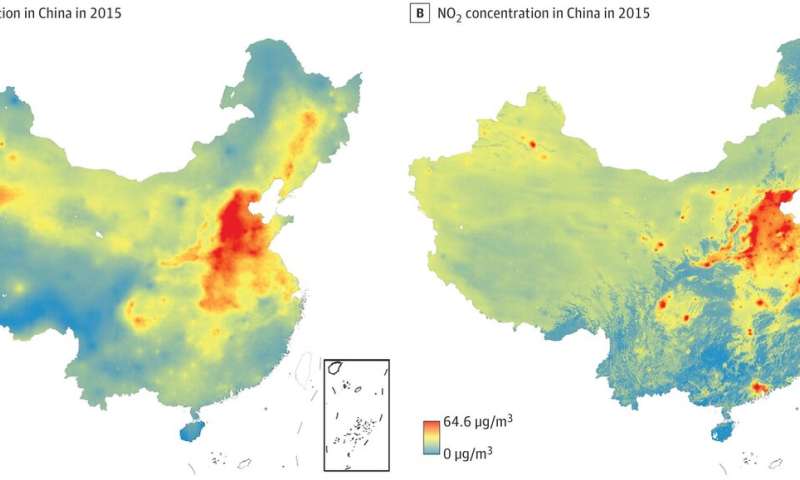 New research from the University at Buffalo provides pathophysiologic evidence of the effect of air pollution on cardiovascular disease in China. The findings also suggests that China may need to revise its standard for one type of pollutant.

Researchers found that long-term exposure to particulate matter and nitrogen dioxide, as well as proximity to vehicular traffic, were associated with severity of coronary artery calcium, or the buildup of plaque in the artery walls. The study was conducted on 8,867 Chinese adults aged 25 to 92.

The findings, published in JAMA Open Network, are significant because, while similar studies have been conducted in the U.S. and Europe, this one is the first to investigate the connection between air pollution and coronary artery calcium in China. The country has focused more recently on reducing the extremely high levels of air pollution that exist in some regions, particularly northern China.

“This study may provide evidence that coronary atherosclerosis is a pathological pathway through which air pollution exposure increases risk of death from coronary heart disease,” said the paper’s first author, Meng Wang, assistant professor of epidemiology and environmental health in UB’s School of Public Health and Health Professions.

“This finding should contribute to an understanding of air pollutant effects worldwide, providing both much-needed, locally generated data and supportive evidence to inform the air pollution standard setting process on a global scale,” added Wang, Ph.D., who is also a faculty member in the UB RENEW (Research and Education in eNergy, Environment and Water) Institute.

Atherosclerosis refers to the build-up of plaque, or fatty deposits, in the artery walls, which, over time, restricts blood flow through the arteries. This can cause a blood clot resulting in a heart attack or stroke.

“Atherosclerosis is a lifelong process. As such, the effects of air pollution exposure on atherosclerosis are likely to be chronic,” Wang explained.

If an association between this condition and air pollution were established, Wang added, it could provide an opportunity for local-level efforts to control people’s exposure to pollution before it becomes harmful to health.

The study centered on levels of nitrogen dioxide and PM2.5, or fine particulate matter. PM2.5 are super tiny particles that can easily be inhaled, causing serious health problems, according to the U.S. Environmental Protection Agency.

The study also looked at proximity to traffic and used nitrogen dioxide as a more precise indicator of vehicular emissions. It showed that the risk of a higher coronary artery calcium score increased by 24.5 percent for every 20 micrograms per cubic meter of air increase in nitrogen dioxide.

Air pollution remains a significant issue in China. In 2015, more than 95 percent of the Chinese population was exposed to concentrations of PM2.5 and nitrogen dioxide greater than the minimum level of the study, according to Wang.

Improving air quality to the Chinese national standards of 35 and 40 micrograms per cubic meter of air for PM2.5 and nitrogen dioxide, respectively, may help people live longer, Wang said.

Still, the effect of nitrogen dioxide exposure on coronary artery calcium persisted even when researchers restricted their analysis to concentrations below 40 micrograms per cubic meter of air.