Tiredness has a worse effect on teenage girls than it does on boys, according to research.

In a study of how much a lack of sleep impacted teenagers’ lives, girls said they are more likely to miss school, feel less motivated and nap at weekends.

Those aged between 13 and 17.5 years were asked a serious of questions about how much tiredness affected their lives.

Girls’ answers suggested they felt the effects of losing sleep more harshly than boys did – though they are no more or less likely to drink coffee or energy drinks to try to wake themselves up.

According to the Sleep Foundation teenagers need between eight and ten hours of sleep per night to function properly.

But the demands and distractions of modern life mean many do not get enough, which can interfere with their daily life.

Experts say their research shows girls feel these effects more than boys do. 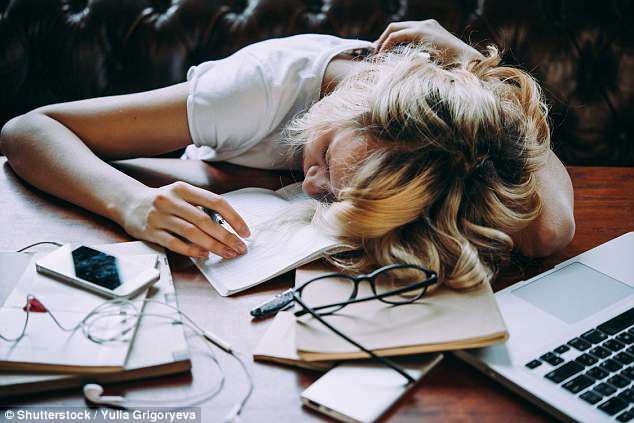 Teenagers need eight to ten hours of sleep a night according to the Sleep Foundation, but many do not get enough because they go to bed late and wake up early

The study from the Université du Québec in Canada surveyed over 700 teenagers in grades nine through to 11 and asked nine questions about the impact of sleep on their waking lives.

They were asked to rate their difficulty staying awake in a number of scenarios and how often tiredness stopped them going out.

Doctoral research student Pascale Gaudreault, who helped run the study said: ‘What was most surprising is the fact that teenage girls reported a higher degree of interference of daytime sleepiness than teenage boys on multiple aspects of their school and personal activities.

‘For example, teenage girls have reported missing school significantly more often than teenage boys due to tiredness, as well as reported having lower motivation in school due to a poor sleep quality.’

Sleep patterns are known to change during adolescence and teenagers need a lot of rest because the body releases the majority of its growth hormone during deep sleep.

Teens need more sleep than adults but but tend to go to bed late – and later as they get older – and get up early for school.

The scientists do not explain why a lack of sleep affects girls more than it does boys.

HOW MUCH SLEEP DO WE NEED?

The average person spends around a third of their life asleep, so it is an important aspect of health and wellbeing.

The amount of sleep varies depending on how old a person is, and generally the older you get the less shut-eye you need.

Daily guidelines from the Sleep Council are:

It is important to sleep in cycles of around 1.5 hours – seven-and-a-half or nine hours is often the optimum amount for an adult.

This is so the body has time to get into deep – or REM – sleep, when the body is resting the most, and also the stage in which people dream.

731 adolescents – 311 boys and 420 girls – answered questions about their sleep on a seven-point scale in which seven was often and zero was never.

These included while they were class in the morning, while in class in the afternoon, while doing their homework after school, and whether they fell asleep during class.

Questions also included whether they missed school or felt less motivated at school because of their sleep, or drank coffee or energy drinks to try to wake themselves up.

Participants also rated how often they were too tired to do activities with their friends or took naps during the weekend.

Girls gave the highest scores in nearly every category except whether they drank coffee or energy drinks, or how often they fell asleep in class, for which there is difference between the genders.

‘These results suggest that teenage girls may be more vulnerable than teenage boys when it comes to the negative impacts of adolescence’s sleep changes,’ said Gaudreault.

Lack of sleep linked to obesity

Sleep is known to be important to people of all ages but a recent study showed teenagers getting less than six hours of sleep a night are 20 per cent more likely to be obese by the time they are 21.

Daytime sleepiness and fatigue are known to affect what and how people eat, by altering appetite and stimulating cravings.

Energy levels may also play a role. For the sleep-deprived, ordering calorie-dense fast food is easier than preparing a nutritious meal.