For more than 20 years the 501st Legion has turned Star Wars fandom into a force for good. 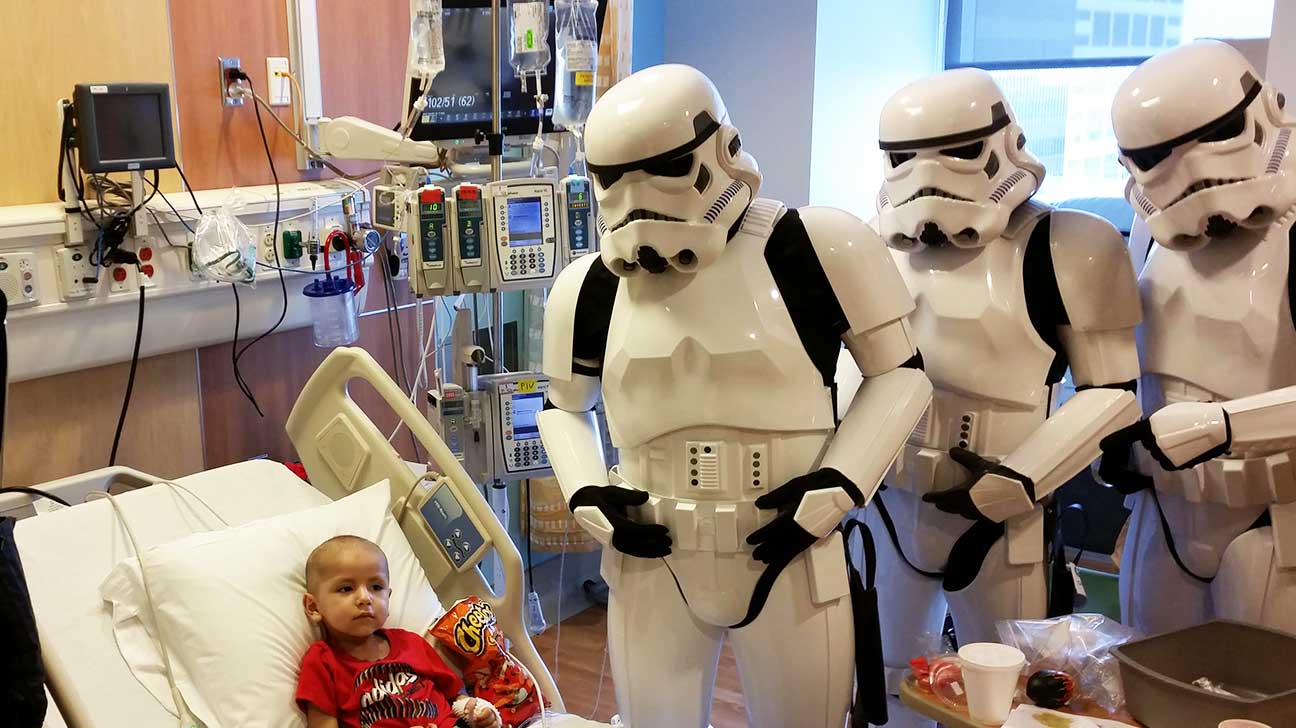 When Stacy Meyn went to see “Star Wars” for the first time in 1977, it wasn’t just another trip to her local movie theater — it was a life-changing experience.

She says the film about a small rebellion overcoming all odds to defeat an evil empire moved her like no other, filling her with joy and a feeling more powerful than The Force: hope.

Little did she know that day, that years later she’d regularly don the uniform of an imperial officer from a galaxy far, far away and join stormtroopers for visits to hospitals. There, they’d bring that joy from another world to children fighting battles of a different kind on this planet.

Meyn is one of more than 11,000 people in 60 countries around the world who are members of The 501st Legion. This all-volunteer organization unites costume enthusiasts who have “a penchant for Star Wars villainy” and a desire to “do good.”

The nonprofit provides members with a wide variety of opportunities to bring smiles in Star Wars-style to their communities, from appearing in costumes at themed events to volunteer charity work.

Nevertheless, Meyn says it’s the moments she gets to brighten the lives of young people in need that she enjoys most.

“They’re always so happy to see us,” Meyn says of the young patients who are visited by the 501st Legion. “I remember during one visit to a Ronald McDonald House, we spent time with this frail little guy. He was really thin and his lips were blue, but he was just so happy when we walked in. The thundercloud over his head disappeared. Sunbeams and rainbows came out. He just wanted to stand next to us and touch us — just wanted to hold our hands. We didn’t want to leave.”

Similar stories are shared by many in the group, who each must meet specific requirements before they’re granted membership in the 501st Legion.

Each costume worn at events must match its big-screen counterpart down to the smallest detail — which can mean lots of time and lots of money.

But he insists the extreme expense doesn’t bother him because his hobby helps a good cause. “We want to bring the magic — especially when we go to see the kids in hospitals. When we walk into that room, if they’re a Star Wars fan, they’re like, ‘Oh my gosh, Darth Vader!’ To see them light up and smile like that… it’s the reason why I do what I do.”

Members say the volunteer work is often a heartwarming experience, but it can be a heartbreaking one too.

“[Visiting the wards] can be very difficult to do because you see kids who are doing very poorly and you have to be extremely cheerful and animated with them,” says 501st Legion member Diana Wolf Torres, explaining how a visit to a hospital can leave a costumed volunteer feeling taxed.

“To do that for an hour, hour and a half, can actually be quite exhausting. But you do it because you can see it makes this huge difference for the kids.”

The healing power of happiness

That difference comes from a simple feeling: happiness.

Scientists have long observed that happiness and positivity can have beneficial effects on a person’s health.

In fact, research reviewed from multiple studies and published in 2017 by the International Association of Applied Psychology found that a positive state of mind can boost the function of the cardiovascular and immune systems and, in some cases, even hasten wound healing.

For members of the 501st, however, studies such as these only reaffirm what they witness each time they visit a pediatric ward: the healing power of joy in action and the hope it brings.

For member Mark Preader, who runs his own martial arts studio for kids, his work with the 501st Legion fits with his life philosophy. “Working with kids as much as I do, empowering them through martial arts training — that’s for the kids who are healthy and can be empowered that way,” he says.

“What we do with the 501st for kids in the hospital who aren’t as healthy, it gives us a chance to [help out on] the other side.”

‘Truly wonderful the mind of a child is’ — Yoda

The chance to see that “other side” is exactly what drew Sarah Adams to the organization.

“I’m a senior clinical laboratory scientist, or CLS for short. It’s a fantastic job. I get to help people every single day. But I’m one of those people behind the curtain. I never get to see my patients. So, when I do hospital visits for kids, it’s great to see that I’m actually making a difference,” Adams says.

She recalls one particular visit that inspired her to up her costume game to even greater heights — literally — when she had an unforgettable encounter with a parent. “We ran into a gentleman in the hallway, and he was super excited to see us. He asked, ‘Where’s your Wookiee? My son loves Wookiees!’”

Unfortunately, there wasn’t anyone in Adams’ group who dressed up as a Wookiee (the race of tall, hairy beings of which Chewbacca is a part).

Adams says she was sorry they couldn’t meet the parent’s request, but she didn’t think much more about his comment at the time.

However, later in the visit, the hospital staff instructed her and her fellow Legion members to keep things “low-key” around one specific child, as he was in the final stage of his battle with a terminal illness.

“Then it dawned on me,” Adams says. “It was that man’s son that was passing away.”

The visit haunted Adams for some time, motivating her over a year and a half as she crafted her own Wookiee costume from hundreds of hand-braided yak hair strands. Today, Adams straps on a pair of stilts and slips into the furry costume for her visits.

“Now every time I put the suit on, it’s for that little boy,” she says. “He never got to meet Chewbacca, his favorite character, but because of him, hundreds of kids get to meet his hero now. He touched my life in a very small way, and now I can touch other lives and bring them happiness.”

The Force is strong with this one

In addition to numerous hospital visits made by the 501st Legion each year, the organization has raised millions of dollars for various charitable causes since it was founded in 1997 by South Carolina residents, Tom Crews and Albin Johnson.

The group is also currently raising funds through The 501st Legion Make-A-Wish Endowment, which will allow Make-A-Wish America and Make-A-Wish International to grant Star Wars-related wishes to children diagnosed with life-threatening medical conditions.

After only 10 months, their goal was met and the group quickly set a new goal, challenging themselves to raise $501,000 by the same date.

The organization’s tireless dedication to the spirit of ‘Star Wars’ has earned the respect of both fans and Lucasfilm Ltd.

While not officially sponsored by the entertainment company, it has become Lucasfilm’s preferred Imperial costuming group — even marching alongside ‘Star Wars’ creator George Lucas himself in the 2007 Rose Bowl parade.

Over the course of the last four decades, the ‘Star Wars’ movies have moved millions of people who have embraced the saga’s elements of struggle, hope, and inspiration.

It’s a message that the men and women of the 501st Legion — and its sister group The Rebel Legion — work to further every day.

“Star Wars is all about hope,” Preador says. “Visiting these children in the hospital, we give them just a little bit of hope to get through the day, or to get through whatever they’re battling. I think that’s pretty profound.”