Approximately one-third of domestic violence victims may suffer from a specific type of fracture to the forearm, which underscores the need for proper screenings, per a news release.

More specifically, researchers from Brigham and Women’s Hospital in Boston and Boston Medical Center found that fractures to the bone stretching from the pinky to the elbow, or “ulna,” usually result from an act of self-defense among victims. The findings were said to be presented at the ongoing annual conference for Radiological Society of North America, RSNA 2020.

“I would see these types of injuries in men, but once in a while I would see them in women,” Dr. Bharti Khurana, senior author and radiologist at Brigham and Women’s Hospital in Boston, said in a news release. “I never correlated it with intimate partner violence until recently. I shared my thoughts with our orthopedic surgeons and, with their interest and support, decided to pursue the study.” 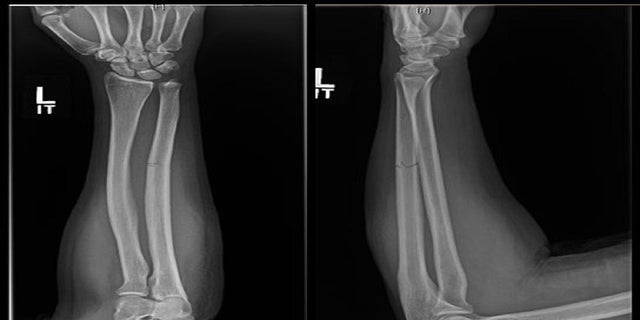 Victims of domestic violence frequently blame the fracture on falls, though falls usually result in a different kind of fracture, a researcher said.
(Courtesy of Radiological Society of North America)

Along with colleagues, Khurana studied electronic medical records from six hospitals for the fractures among women aged 18 to 50. Of 62 identified patients, 20 were at least suspected of “intimate partner violence,” per the release; 12 were confirmed victims.

“The radiological characteristics we were looking at were the location of the fracture, the pattern of the fracture in terms of how it broke, and the displacement of the fracture,” Dr. David Sing, study lead author and orthopedic surgery resident at Boston Medical Center, added in the release. “Out of all those things, what we usually saw was a minimally displaced fracture, meaning the bone is broken all the way through but has not shifted significantly.”

Khurana said victims of domestic violence frequently point the fracture to a fall, though falls usually result in a different fracture – to the radius of the forearm – instead. Some of the women with confirmed cases of domestic violence were also linked to homelessness and other hospital visits for injuries.

The researchers said formal evaluation for domestic violence was only conducted in 40% in suspected or confirmed cases, and that radiologists can help address this issue by communicating to physicians that the fractures may be a sign of domestic violence.

“Careful analysis of previous imaging exams may also help radiologists confirm their suspicion of intimate partner violence,” Dr. Rahul Gujrathi, a radiology fellow at Brigham and Women’s Hospital, said in the release. This approach alone flagged suspicion for three-quarters of confirmed cases, per the release.

Khurana says earlier detection can improve chances at breaking the cycle of violence, similar to how early screenings can intervene with other diseases, too.

GET THE FOX NEWS APP