‘She came to this world to teach us not to give up’: Proud parents of toddler born with a ‘crown on her head’ slam medics who told them to ABORT her as she defies the odds to reach her third birthday

A toddler who was expected to die moments after being born with severe facial deformities is approaching her third birthday.

Doctors advised Helianny’s mother Soleannys Lugo, 34, to terminate her pregnancy after four-month scans revealed the youngster was ‘incompatible with life’, yet Miss Lugo ‘decided to give her a chance to live’.

According to Miss Lugo, her daughter was born with ‘a crown embedded in her head’ due to unusual bone protrusions.

While in the womb, Helianny’s brain, eyes and nose failed to develop properly, as well as her suffering a cleft lip, clubbed foot and fused fingers.

Cruel strangers say Helianny, who has an unclear diagnosis, is a ‘horrible thing’ and should have been aborted for being ‘ugly’.

Yet, Miss Lugo said she was filled with love and admiration for her daughter the moment she saw her, adding: ‘I believe Helianny came to this world to teach us not to give up’.

Helianny’s parents, from San Cristobal, Venezuela, are speaking out to raise money towards future surgeries that should enable their daughter to walk, talk and be as independent as possible. 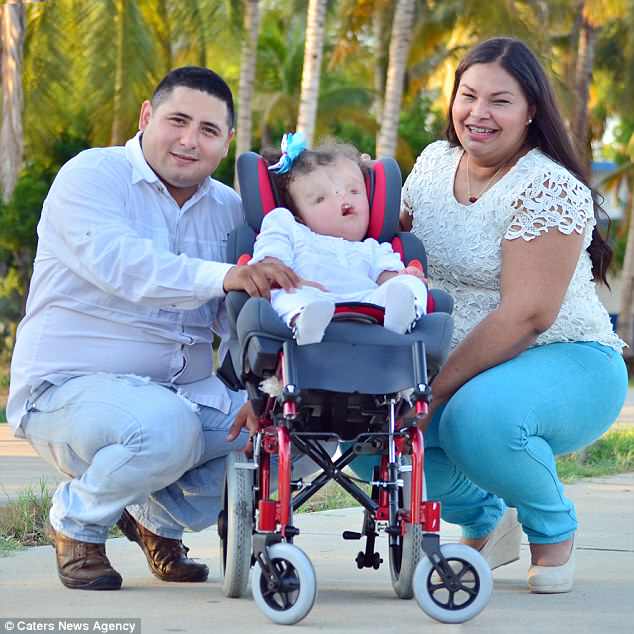 Toddler Helianny (pictured with her mother Soleannys Lugo, 34, and father Henry Buitrago, 30) was expected to die moments after being born with severe facial deformities The toddler, who is approaching three, was thought to be ‘incompatible with life’ 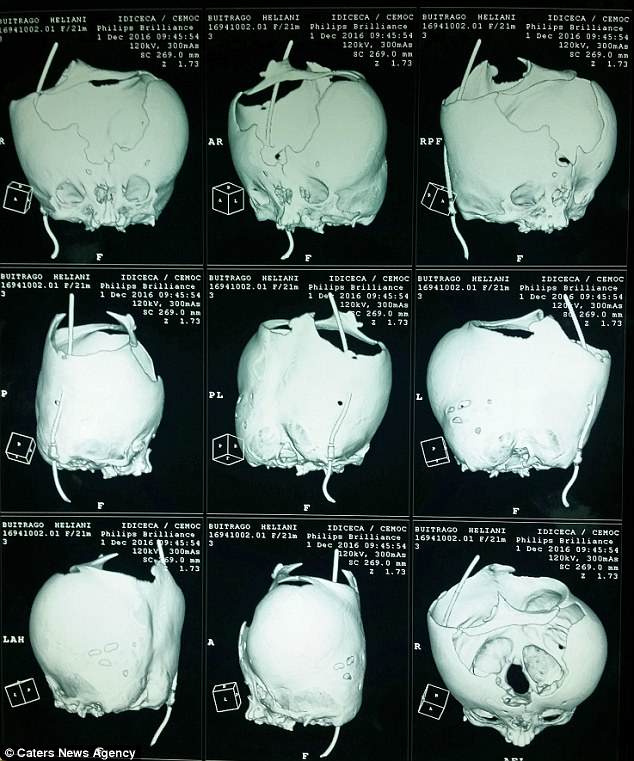 Scans taken shortly after Helianny’s birth revealed fluid had filled the cavities in her brain, which led to her suffering from a swollen skull. This can also cause brain damage

Hydrocephalus is a build-up of fluid in the brain, which can damage tissue.

Aside from an abnormally-sized head, other symptoms can include headache, nausea, vomiting, confusion and vision problems.

Hydrocephalus’ cause is usually unknown but may be due to issues with cavities in the brain or an underlying health problem that affects blood flow, such as heart disease.

It can also be acquired by damage to the brain due to a head injury, stroke or tumour.

Treatment is shunt surgery, which involves implanting a thin tube into the brain to drain away excess fluid to another part of the body where it can be absorbed into the bloodstream.

If untreated, hydrocephalus can be fatal due to increased pressure compressing the brainstem, which is responsible for regulating heart rates and breathing.

A patient’s prognosis after surgery depends on their age and general health.

Speaking of when she discovered her daughter’s deformities, Miss Lugo said: ‘From the beginning doctors diagnosed the non-compatibility of Helianny with life. They always recommended termination of the pregnancy.

‘Even though we were told she was a vegetable, I assured them she was not because she kicked me.

‘She responded to stimuli, when I talked to her she responded with kicks and she liked instrumental music, she moved a lot with all of this.

‘I decided to give her a chance to live. I loved her with my soul and with all my heart.’

Speaking of seeing her daughter after she was born at 39 weeks via C-section, Miss Lugo added: ‘She had a cleft lip, her eyes were not formed, her nose was not visible, her brain was not completely formed, with a clubbed foot and hands without fingers.’

The youngster also had hydrocephalus, which causes fluid to fill cavities in the brain, leading to a swollen skull and likely brain damage.

Miss Lugo added: ‘I would compare Helianny’s appearance back then to a “supernatural queen” because she had a crown embedded in her head.

‘The three protrusions on her head looked like a crown, she had no eyebrows, no eyelashes, very pronounced veins on her head that seemed to burst and pink skin colour in her eyes, where her eyeballs should be.

‘Her nose was completely stuck to the skin with only two nasal holes, one very small and the other slightly larger. But even so I perceived her beauty then and still do to this day.

‘I consider my little girl a true warrior of life, a fighter. A winner in all of the battles that she has had to fight.

‘I believe Helianny came to this world to teach us not to give up, to stop complaining about nonsense, to live one day at a time, to be grateful with what we have.’ 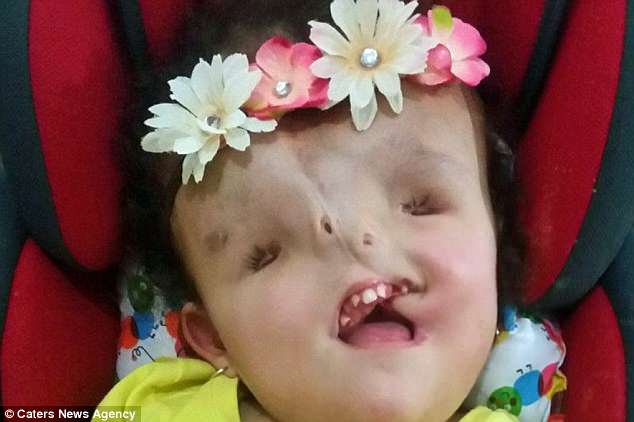 While in the womb, Helianny’s brain, eyes and nose failed to develop properly 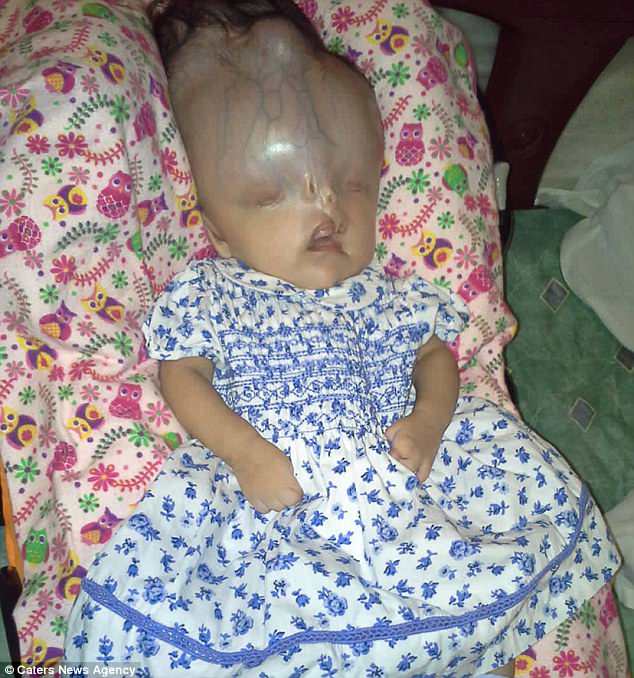 The youngster (pictured as a baby) was born with a cleft lip, clubbed foot and fused fingers 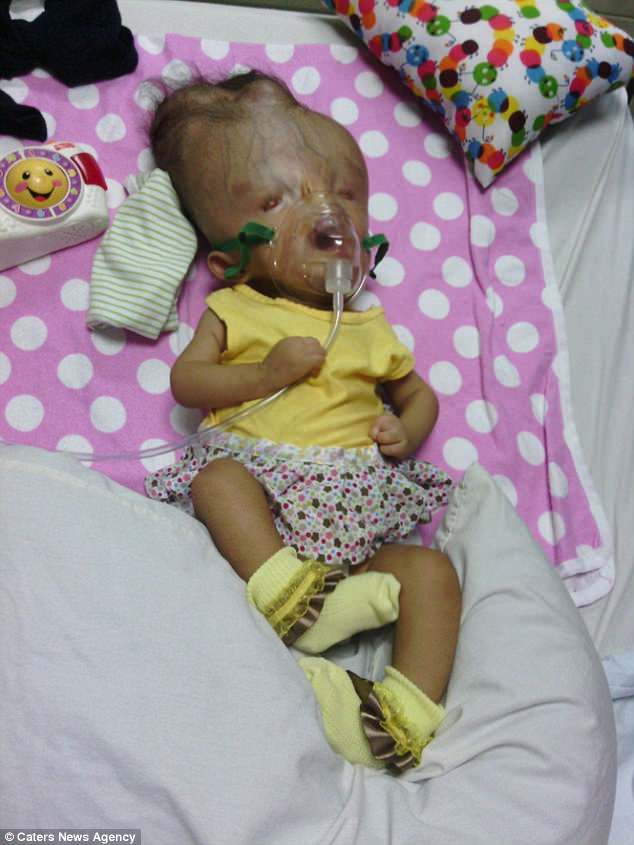 Pictured at a few months old, Helianny was left to die in peace shortly after her birth 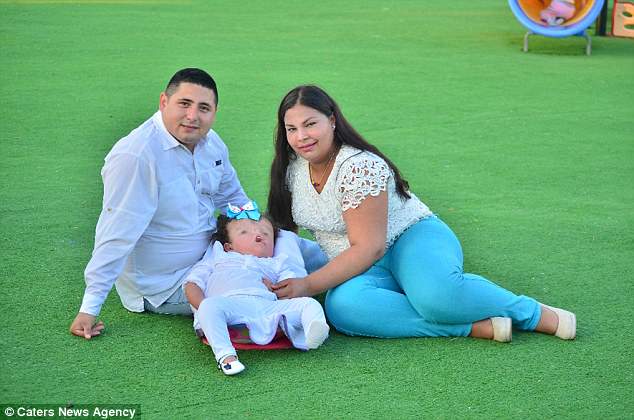 Baby was left to ‘die in peace’

Speaking of what happened after her C-section, Miss Lugo said: ‘When I woke up I was in recovery and my baby was in another hospital unit, they had given her father holy water to baptise her and let her die in peace.

‘The next day I went to where she was and when I saw her for the first time, I said “My Helianny is a warrior”.

‘I took her hand and told her, “if you’re still here it is for something big and rest assured we will be here to support you and accompany you on this long road”.

‘I reminded her how much we loved her and how important she was and is for us.’

Speaking of her daughter’s recovery, Miss Lugo said: ‘The first few days I did not want anyone to see her, while I was accepting what was happening.

‘I did not want her to be seen as an alien or for anyone to pity her.

‘A few days after I accepted she was different. I do not regret having her and I love her so much that if I had to remake the decision I would do it all again.

‘Many people bless Helianny and wish her a good future, we always appreciate that.

‘There is also a minority that attacks me, saying that I was irresponsible to have continued with the pregnancy.

She added: ‘They say that I did not think about the future of Helianny and that if I should have stopped to think what will happen to her when neither her dad nor I are here.

‘I try to ignore those comments, but of course I think about that. Currently, we live for today and take everything one day at a time.

‘Nobody knows the future, meanwhile we will continue to work tirelessly so that Helianny can be as independent as possible.’ 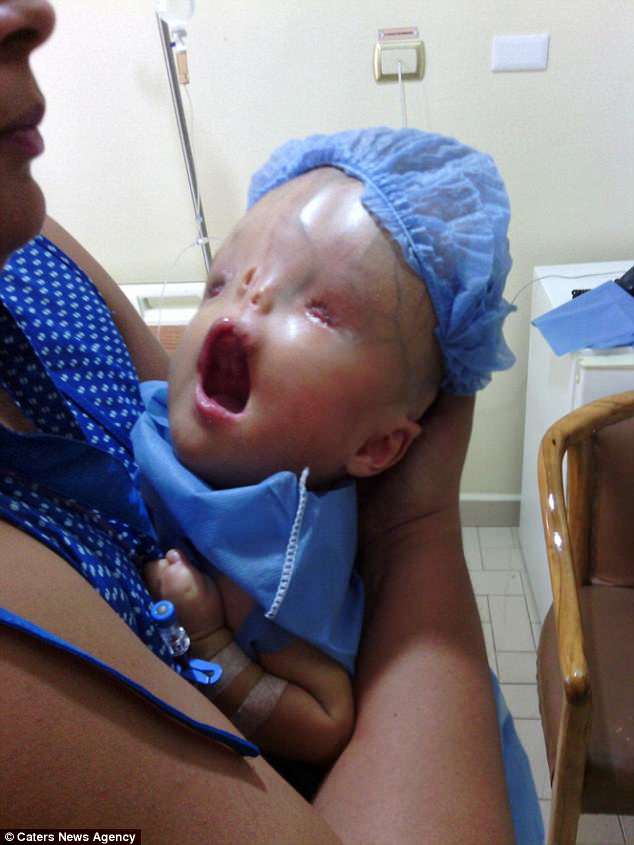 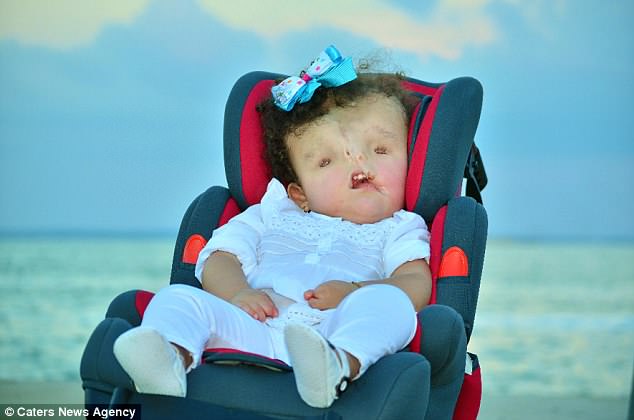 The youngster has spent a lot of time in hospital, where she has undergone four surgeries

‘Many people stare and whisper’

Despite the family contending with cruel comments from strangers online and in person, they refuse to hide away.

Miss Lugo said: ‘We have always tried to include Helianny in all of our activities and when we go to the supermarket there are many people who look surprised, some stare and others just whisper.

‘Through social networks I’ve been told many awful things, like why I didn’t have an abortion, that she came to this life to suffer, that she had to die and that she is a horrible thing.

‘On one occasion we attended a party in a park that a friend organised and among the children I was approached by a child and he asked us why she was born so ugly.

‘He didn’t give me time to respond, a girl who was nearby heard his comment told him “you are the ugly one” and she calmly said that Helianny was “beautiful”.’

‘She teaches us not to give up’

To date Helianny has undergone four surgeries. The first two drained fluid from her brain, while the third relieved her club foot and the fourth helped with her cleft lip.

Her family are fundraising for future surgeries that will improve her quality of life and repair some of her facial deformities.

Miss Lugo said: ‘In the future I hope we can achieve the funds to perform the necessary surgeries.

‘I dream of seeing Helianny walk, talk and be as independent as possible so her only limitation is what she limits herself to.

‘I thank God every day of my life, Helianny has life, strength, tenderness, perseverance, optimism and she is an angel.

‘Helianny came to this world on a great mission of life, to show us that we complain about so many insignificant things and forget to be happy.

‘She teaches us not to give up and to fight but without ceasing to be an angel.’