Home » Health News » Too much stress can make you go blind, scientists warn

Do YOU have a stressful job? It could leave you BLIND: Psychological pressure can cause vision loss, warn researchers

Too much stress can make you lose your eyesight, a study has found.

Although it is well known that losing their vision can stress people out, scientists now say the reverse is true and stress can cause vision loss, too.

The nerves and blood vessels in the eyes and the brain can be affected by high levels of cortisol – the stress hormone – which can lead to worsening eyesight.

The study also found, however, that reducing stress can even reverse the damage and restore some of the vision which has been lost.

Stress can be caused by being under pressure at work or at home, worrying about something specific, or having responsibilities that you find overwhelming.

Experts say understanding the link between stress and vision could improve doctors’ treatment of eye disorders by allowing them to include stress management. 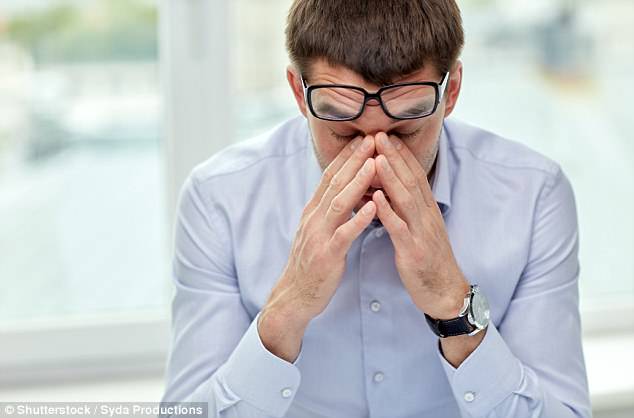 Stress can worsen eye problems by increasing pressure in the eye or causing damaging inflammation, the researchers found

Research by Magdeburg University in Germany looked at hundreds of past scientific studies and clinical reports exploring the relationship between stress and eye disease.

They found stress may cause damage by increasing pressure in the fluid inside the eye, damaging blood vessels, or causing inflammation.

The scientists say there is ‘clear evidence’ that stress worsens eye problems, but doctors do not take the link seriously when treating patients, even when the patients believe their stress plays a role.

Now, they say a holistic approach to treating eye patients should be used more widely.

A report by the Health and Safety Executive in November last year revealed the jobs in which the most people suffer from work-related stress are nursing and midwifery, teaching, welfare professionals, legal professionals, and business research or admin.

Mental health charity Mind suggests people can reduce stress by organising their time better so they are not rushed, asking others for help, setting small and achievable targets, or making to-do lists and focusing on important tasks first.

The study was led by Professor Bernhard Sabel, director of the Institute of Medical Psychology at the university.

Just two months of stress may damage a man’s sperm and slash his chances of having children, a study published this month suggests.

Israeli scientists found men are 47 per cent more likely to have swimmers with weak motility if they are under intense pressure.

Weak motility makes it less likely that sperm will successfully fertilise an egg.

Some 11,000 sperm samples were compared between men – average age 32 – during peacetime and after periods of intense fighting between Israel and Gaza.

Even though the findings related to just those living in conflict zones, the researchers argued they could apply to any mental stress.

Dr Eliahu Levitas, study author, said: ‘This study shows that prolonged stress can have an effect on sperm quality.

‘Mental stress is known to have an adverse effect on fertility, but there is little research on the impact of stress on sperm quality.’

Professor Sabel said: ‘There is clear evidence of a [psychological] component to vision loss, as stress is an important cause − not just a consequence − of progressive vision loss resulting from diseases such as glaucoma, optic neuropathy, diabetic retinopathy, and age-related macular degeneration.

Mr Sabel notes it is surprising the relationship between stress and vision loss is overlooked when it something patients themselves suggest.

Research showed patients are often told their condition may be irreversible, which adds to their stress, which then worsens their vision in a vicious cycle.

Professor Sabel added: ‘The behavior and words of the treating physician can have far-reaching consequences for the prognosis of vision loss.

‘Many patients are told that the prognosis is poor and that they should be prepared to become blind one day.

‘Even when this is far from certainty and full blindness almost never occurs, the ensuing fear and anxiety are a neurological and psychological double-burden with physiological consequences that often worsen the disease condition.’

The scientists say a combination of improving blood flow to the eyes and holistic therapies which reduce stress could reverse the loss of vision.

These could calm the nervous system to reduce stress and pressure on the eye and may improve results for patients in conjunction with traditional treatments.

Researchers add that doctors, family and carers should also be more optimistic when treating patients, to try to minimise their levels of stress and thus improve their chance of recovery.

Professor Sabel added: ‘Clinical studies are under way to confirm the role of stress in different low vision diseases to evaluate the [effectiveness] of different anti-stress therapies for preventing progression and improving vision restoration.’