Two-thirds of under-30s have ‘WFH back’: Poll finds working from home culture is fuelling rise in injuries in young Brits

Working from home is fuelling a rise in back problems among young adults, a poll suggests.

Two-thirds of Britons aged 18 to 29 said they suffered new back pain during the pandemic as swathes of the workforce switched to remote working.

The most common area for aches was the lower back (32 per cent), which is often caused by poor posture.

Most modern office chairs are designed to keep people’s back straight and take pressure off the base of the spine.

But more than one in five young adults say they work from bed when at home, while one in six sit on the sofa. About one in 100 home workers do so from the floor.

The poll was carried out on behalf of the campaign group Mind Your Back and looked at 1,000 adults across the UK.

Overall six in 10 people said they worked remotely most of the time during the pandemic. 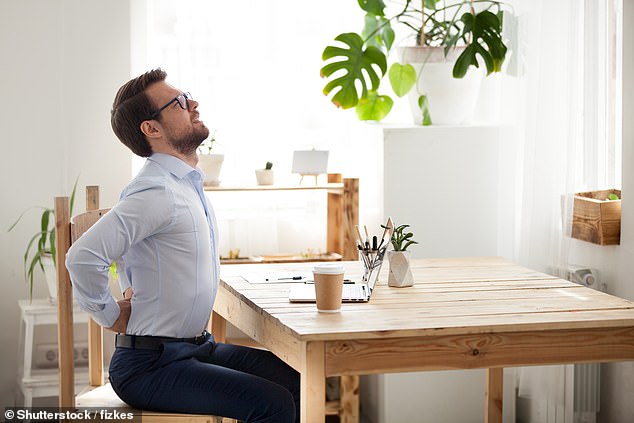 Working from home is fuelling a rise in back problems among young adults, a poll suggests

GP and advisor to Mind Your Back Dr Gill Jenkins said: ‘Almost half [of home workers] don’t have constant access to a table and supportive chair during their working day.

‘Unfortunately, 20 per cent have to work while sitting on a sofa or bed. This plays absolute havoc with posture and spine health.

The pace you walk at may be more important than your overall step count when it comes to warding off disease, research suggests.

For years studies have shown 10,000 daily steps is the sweet spot for lowering the risk of an early death – no matter the speed they’re done at.

But experts in Denmark and Australia have found picking up the pace could reduce the risk even further, even if you do fewer steps.

In the largest research of its kind, researchers monitored 78,500 Britons over the age of 40 between 2013 and 2015 using wearable fitness trackers.

One study found 9,800 daily steps at a casual pace was optimal for lowering the risk of dementia, cutting it in half.

But doing just 6,300 at a fast speed made people 57 per cent less likely to develop the condition. For power walkers, the risk was up to 62 per cent lower.

In a second study, researchers found every 2,000 steps walked per day cut the risk of a premature death by around a tenth.

But walking at a quicker pace was associated with an even greater protective effect.

‘Caring for our backs can reduce stress and boost energy so we can live our lives to the full, without pains and aches holding us back.’

Even though England officially scrapped all Covid laws in April, working from home has continued to play a big role after companies save millions on office space and bills and many workers got used to their new work-life balance.

Official statistics suggest as many as 14 per cent of the current British workforce is still working exclusively from home.

That compares to just 5 per cent of people who worked from home all the time in 2019. The share of staff hybrid working has risen to a quarter.

The latest poll shows that 39 per cent of 18 to 29-year-olds worked entirely from home during the pandemic.

A quarter (24.8 per cent) said they worked remotely some of the time.

Bed (21.2 per cent) was the most common place to WFH, followed by a dedicated office space (20 per cent).

Another 1.2 per cent said they worked from the floor.

Asked if they had noticed any new back pain since working from home, 63.7 per cent said yes.

A quarter said the pain was so bad it prevented them sleeping (24.3 per cent) and a fifth said they were unable to exercise (21.8 per cent).

Some 8.3 per cent claimed it stopped them from working and 6.3 per cent said they couldn’t do their usual hobbies.

It comes after official data revealed the changing habits of Britons after lockdown.

The way people use their time each day has been studied since 2014/15 in the UK by the Office for National Statistics (ONS), with the latest figures up to March 2022, when most Covid restrictions were lifted. 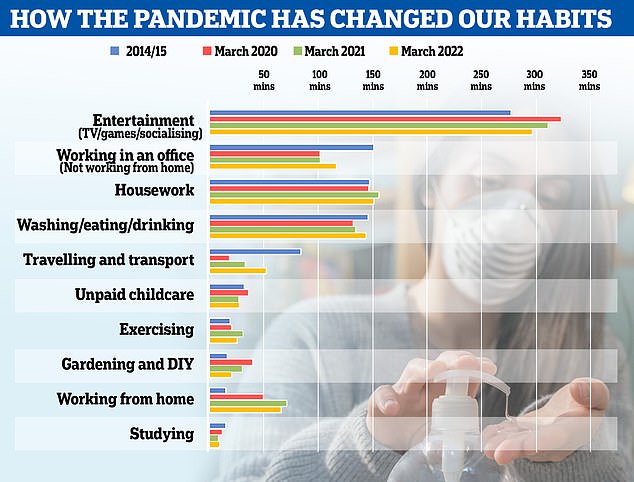 How lockdown re-shaped how Britons spend their time. This chart highlights how people now have more time for exercise and entertainment and socailsing, gardening and housework than pre-pandemic driven, in part, by saving time on the daily commute by working from home

As more people continue to work from home and cut out the daily commute, they’ve also found more time for gardening, DIY and housework.

But questions about productivity remain, as time spent watching TV, reading books and playing video games is up while studying is down.

There was also thought to have been a renewed interest in physical health during the pandemic.

People now spend about five hours per day entertaining themselves —  which includes spending time with friends or family, browsing the internet and texting — 17 minutes more than in 2014/15.

Britons have also found an extra three minutes to spend on gardening each day in that time, with the average person doing about 20 minutes per day now.

Housework also got a time boost from 2014/15, with the average person now dedicating two-and-half hours per day to chores like food shopping and walking the dog, an extra three minutes compared to pre-pandemic.

Britons appear to have crawled back the time by cutting out commuting and ditching the office in favour of working from home.