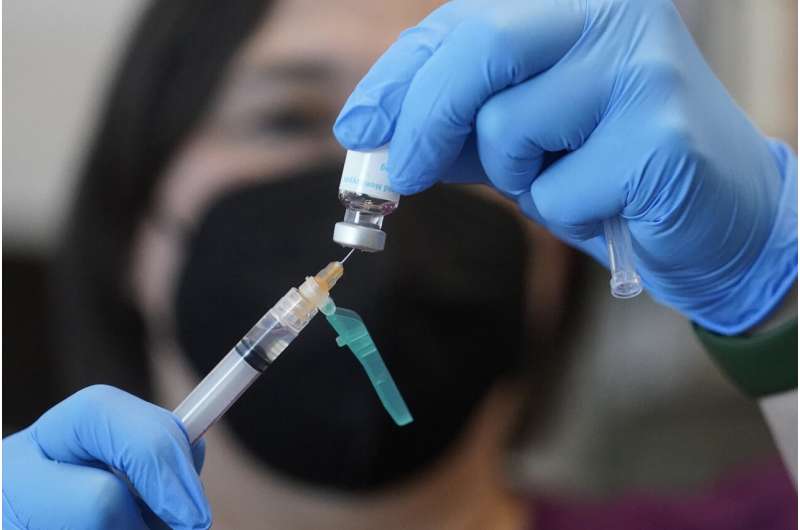 The Biden administration said Friday there’s sufficient supplies of monkeypox vaccine available now but the shots aren’t getting to some of the people who need them most.

About 10% of monkeypox vaccine doses have been given to Black people, even though they account for one-third of U.S. cases, according to data released Friday.

The new numbers from the Centers for Disease Control and Prevention come from 17 states and two cities, and represent the most comprehensive details yet on who has been getting the two-dose vaccines. Similar disparities had been reported previously by a few states and cities.

Most U.S. monkeypox cases have been in men who have sex with men, but officials have stressed that anyone can catch the virus.

Experts offered several possible explanations for the disparity. It may be related to how and where shots are being offered and publicized. It may be that some Black men don’t trust doctors and government public health efforts. Or they may be less willing to identify themselves as a person who is at higher risk of catching the disease.

The gap is an echo of disparities seen during the COVID-19 pandemic, when certain racial groups were a disproportionately large proportion of cases but a smaller fraction of the people initially receiving vaccinations, said Dr. Yvens Laborde, director of global health education at Ochsner Health in New Orleans.

“If we’re not careful, the same thing will happen here” with monkeypox, he said.

“This is a problem that is not resolving,” she said.

Some experts say health officials need to make sure Black men have more access to vaccinations, testing, treatment and other types of information and assistance.

The government hadn’t previously reported on vaccine recipients’ demographics, because such information sharing is voluntary. The CDC has been calling on states and some large cities to share the data.

The numbers released Friday reflect information on about 208,000 doses administered as of earlier this week, out of more than 1 million shipped. Age, sex, racial and ethnic information was not available for every recipient.

But, based on what information was available, the data shows:

—About half of vaccine recipients were white and about a quarter were Hispanic. About 10% were Black and another 10% were Asian.

The gaps nationally echo those seen in statistics from Georgia, North Carolina, New York City and Washington, D.C. In all four locales, Black men accounted for many or most of the cases, but were a smaller proportion of vaccine recipients.

The CDC has said those at highest risk for catching monkeypox include an estimated 1.6 million men who have sex with other men, but the agency does not have a racial breakdown of the men in that group.

Monkeypox is endemic in parts of Africa, where people have been infected through bites from rodents or small animals. It wasn’t considered a disease that spreads easily among people until May, when infections emerged in Europe and the U.S.

There have been more than 45,000 cases reported in countries that have not historically seen monkeypox.

The U.S. has the most infections of any country—more than 16,000. About 98% of U.S. cases are men and about 93% were men who reported recent sexual contact with other men. No one in the U.S. has died, but deaths have been reported in other countries.

Officials say the virus has been spreading mainly through skin-on-skin contact, but they warn it might also transmit in other ways, including through touching linens used by someone with monkeypox.

The Biden administration said Friday it has shipped enough monkeypox vaccine to deliver the first of two doses to all of the people identified to be at highest risk of infection. The administration expects to have enough for second doses available by the end of next month.

Earlier this month health officials authorized a plan to allow injection of smaller doses of the vaccine into the skin instead of into muscle, which has helped stretch supplies. With the help of that new method, which requires about one-fifth the usual dose, the administration says it has now shipped enough vaccine for at least 1.6 million doses.

The administration also has 300,000 vials ready to ship as needed—enough for 1.5 million doses. Another 150,000 vials are expected to be delivered by the manufacturer by the end of September, with more to follow in subsequent months.