Home » Health News » Why are COVID cases in India decreasing, despite the low double vaccination rate? 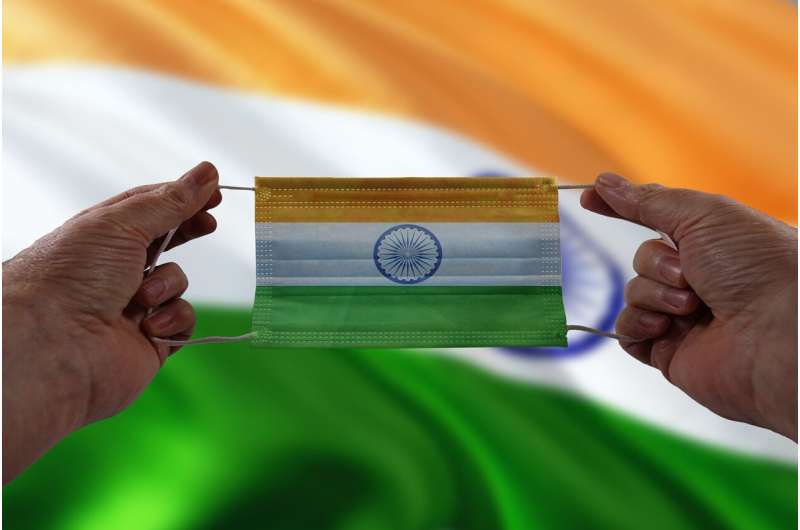 COVID continues to slow down in India. The festival season, which includes Durga Puja and Diwali where large groups of Indians gather, did not lead to a surge in cases. Epidemiological modelers had earlier predicted a third wave peaking during October and November.

And while antibody tests might give us a clue as to why, we can’t get complacent about vaccination rates.

In India, “serosurveys” have been regularly conducted since the pandemic began. This is where blood is tested from large numbers of people to check for the presence of COVID antibodies—the things our bodies make after being infected with COVID or receiving a COVID vaccine.

The fourth national survey in July reported 67.6% of people across India had COVID antibodies present, providing them with a level of immunity against the virus. At that time 24.8% of people were immunized with a single dose of vaccine and 13% were fully vaccinated. This means a large proportion of those with antibodies had actually been infected with COVID.

Delhi reported 97% of people were positive for antibodies in October, including 80% of children. Some 95.3% of those immunized with the Indian version of the Astrazeneca vaccine Covishield had developed antibodies, as did 93% of those who received India’s own vaccine Covaxin.

The state of Haryana’s serosurvey in October found antibodies in 76.3% of adults, upwards of 70% among children, and negligible difference between urban and rural populations.

Kerala had the lowest sero-prevalence of 44.4% in the fourth national serosurvey in July, but in October it had risen to 82.6% among the general population and 85.3% among residents of urban slums.

What does this mean for a ‘third wave’ in India?

A third wave in India is an unlikely scenario with these high levels of antibodies, and vaccination levels continuing to rise.

It’s now recognized those who becoming naturally infected with COVID and recover before vaccination develop better immunity than those who only have antibodies from vaccination. This is referred to as “hybrid immunity”—those with previous SARS-CoV-2 infection mount unusually potent immune responses to the COVID vaccines.

The Centers for Disease Control in the US notes that both the fully vaccinated individuals and previously infected groups have a low risk of subsequent infection for at least six months.

Results of the most recent national serosurvey in India reflect the seroprevalence during the third week of June 2021; the Delta-led second wave had bottomed out at that time. Though about 30% of the population remained susceptible, subsequent serosurveys and an absence of any post-festival surge confirm continuing high levels of protection.

“Patchwork vaccination” areas, where there are pockets of low coverage of vaccination among areas with high levels of coverage, run the risk of small outbreaks, but are unlikely to be large enough to be of any major epidemiological concern.

With high seropositivity among adults, many of the new cases can now be expected among children, particularly with the reopening of educational institutions. But high levels of immunization among teachers (upwards of 90%) and the emerging evidence that reopening schools has not been associated with significant increases in community transmission, are reassuring.

The WHO’s chief scientist said in late August that India seems to be “entering some stage of endemicity.” Endemic refers to the constant presence or usual prevalence of a disease in a population within a geographic area, where disease spread and rates are predictable.

Could a new variant, such as the Delta Plus subvariant first detected in India in April 2021 threaten the current relative stability? While it has been said it might be about 10–15% more transmissible than the Delta variant, the evidence from Europe suggests it has not yet been able to establish any dominance over Delta.

Is vaccination on track?

Of India’s 1.4 billion people, 26.9% are fully vaccinated and 54.9% have received at least one dose so far. But 35 million fewer women have been vaccinated compared to men and independent analyses show tribal and rural districts continue to lag.

There are two current targets: achieving 90% coverage of the first dose by the end of November and timely administration of the second dose. While the first is likely to be achieved, there are widespread reports of complacency regarding the second dose. A campaign is underway to encourage people to complete the schedule.

Delivering the billion plus doses has convincingly demonstrated vaccine confidence. But convincing people to take a vaccine when for many it seems like the risk has passed is a difficult task. Prior infection-induced immunity protects against reinfection but this acquired immunity wanes over time. Hence the recommendation for COVID vaccination for all eligible persons, including those who have been previously infected.