Patients and unions are pushing for more regulation. 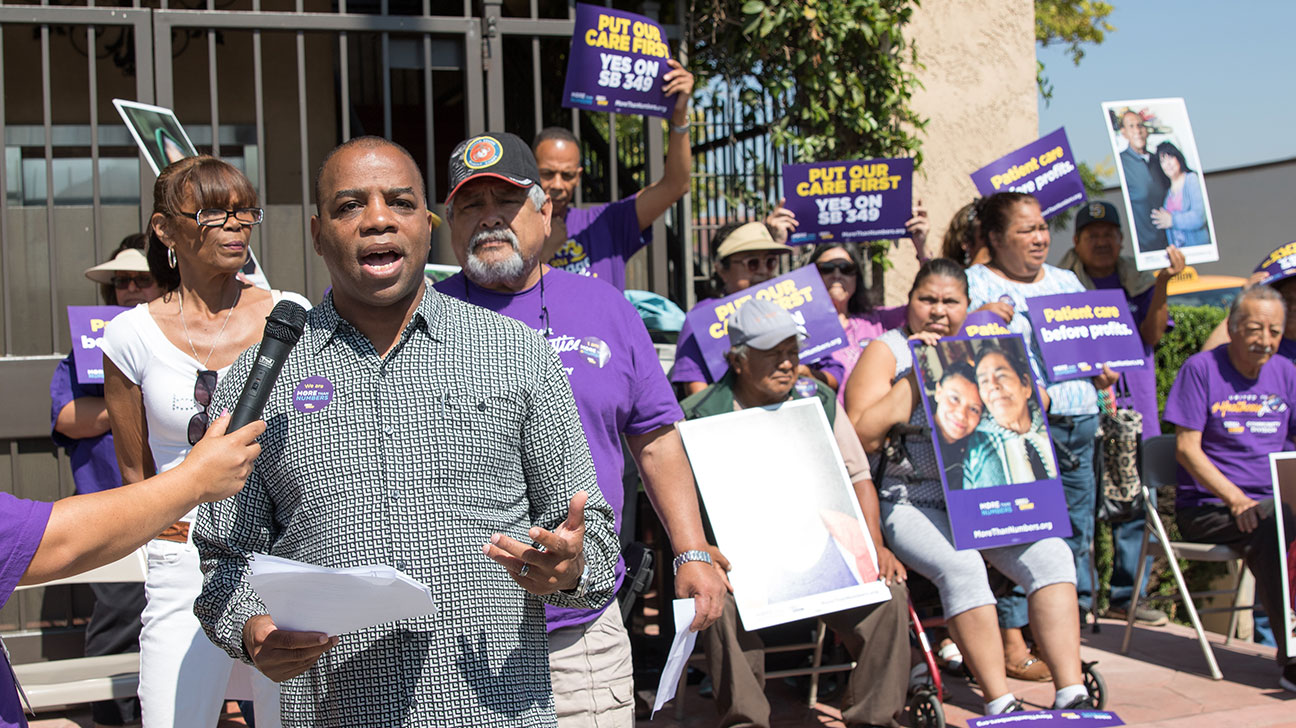 Dialysis can be a lifesaving treatment for people whose kidneys have stopped functioning. The process filters out toxins from their blood that the kidneys would normally remove.

With the rate of obesity and type 2 diabetes growing, there’s been an increasing need for dialysis clinics in the United States to keep people alive. In 1991, there were 2,046 dialysis facilities nationwide. But by 2015, that figure tripled to 6,592.

In California, increasing numbers of health and safety violations have led some people to raise concerns that these centers aren’t focused on patients as much as their bottom line.

Advocates are now pushing to pass a new ballot measure that would cap revenues. But detractors say it could ultimately end up hurting patients.

One concerned patient, Mario Gonzales, goes to a clinic in Fresno, California. Gonzales says he felt his blood run cold the first time he walked into the clinic.

“It was more of a gut feeling,” Gonzales, 61, said of that first day almost four years ago. “It was an atmospheric feeling after walking in there. Something just told me… something (here) is wrong.”

While nurses and technicians at the clinic were kind and professional, Gonzales notes there weren’t enough of them.

He says he saw many elderly patients fill the clinic’s 28 chairs who needed help to sit up or to use the restroom. Without enough staff, patients were left unattended for long periods of time, he says.

Gonzales says in the months that followed, he also noticed other troubling details, like blood on the floor and insects crawling on equipment.

“I was just so disgusted that these senior citizens were being treated like this,” Gonzales said.

Gonzales didn’t feel comfortable sharing the name of this clinic with Healthline, but did say the clinic was eventually remolded and is much more sanitary now.

But he hasn’t forgotten those early days.

Taking concerns to the ballot box

With those images in mind, Gonzales joined a movement in California that supporters say will improve services and staffing at dialysis facilities statewide as well as other clinics across the nation.

They’re pushing for a ballot initiative called the Fair Pricing for Dialysis Act. It would limit for-profit dialysis corporations’ revenues to 15 percent above the amount they spend on patient care.

After that, the centers would be required to issue rebates to payers.

Its supporters say the initiative would require dialysis corporations to invest their profits to hire more staff, buy new equipment, and improve facilities. Detractors say putting a cap on revenue could put patients at risk.

More than 600,000 signatures were collected from California voters and submitted to election officials in early April. The act will now appear on the statewide ballot this November.

But this isn’t confined to California. SEIU-UHW is also sponsoring similar initiatives in Arizona and Ohio.

The ballot measure takes aim at the increasing cost for dialysis treatments as more and more dialysis centers pop up throughout the country.

This expansion coincides with the rise in the number of people receiving diagnoses of end-stage renal disease.

More than 660,000 Americans have the disease, and kidney specialists say that number increases by 5 percent annually. Most people with end-stage renal disease turn to hemodialysis treatments, which include a schedule of three sessions per week. Each session lasts three to five hours.

The bill for those treatments fall mostly on American taxpayers through Medicare or Medicaid funding.

Annual hemodialysis costs the United States $42 billion, according to estimates compiled by the University of California at San Francisco (UCSF). Most of that — or $34 billion — is paid for through Medicare.

The remaining cost is either covered by Medicaid, private insurance, or out of pocket, according to the UCSF report.

Union officials say much of the profit is made from charging private insurance companies high rates.

Both are both for-profit companies.

Opposition to the ballot measure

The ballot measure is facing a large amount of opposition from several organizations, including the California Medical Association, which say it could hurt patients.

Patients and Caregivers to Protect Dialysis Patients (PCPDP), a coalition of more than 60 groups sponsored by the California Dialysis Council — and primarily funded by DaVita and Fresenius — also called the ballot measure flawed.

The coalition, made up of doctors and patient groups, says placing a cap on revenue could put more patients at risk and hurt smaller facilities in rural areas. Group members also called the initiative a familiar tactic to unionize nurses and technicians.

Kathy Fairbanks, spokeswoman for PCPDP, says infection rates in California’s dialysis centers are lower compared to those in states where there are set staffing ratios.

“There’s no evidence to bear that out,” Fairbanks said. “In fact, the actual evidence shows that California is doing better without staffing ratios than the states that already have them in place.”

Meanwhile, in a statement to Healthline, Fresenius — which owns more than 2,200 dialysis centers nationwide — also called the union’s movement flawed.

“We are opposed to this deeply flawed proposition, joining with doctors, nurses, techs, patient advocacy groups, and many others in opposition, because it will limit patients’ access to life-sustaining dialysis,” said Brad Puffer, spokesperson for Fresenius Medical Care North America.

“This initiative could force community dialysis clinics to cut services or close altogether,” said Lori Hartwell, president and founder of the nonprofit Renal Support Network, in a statement. “People who need dialysis may be left without access to the life-saving treatment they need to stay alive. This is a dangerous proposition and should be defeated.”

How often are dialysis centers inspected?

State and federal officials regularly inspect dialysis centers, but not exactly often. And violations have been growing as the number of centers increases.

Lara said his bill, which SEIU-UHW also sponsored, was intended to hold corporations accountable and help reduce bloodborne infections, such as hepatitis. He eventually shelved the bill, saying he preferred to allow “the industry, workers’ groups, patient groups, advocates and the administration” to find a solution.

The federal Centers for Medicare and Medicaid Services (CMS) requires that the California Department of Public Health survey 10 percent — currently 65 — of the state’s dialysis centers each year.

The facilities are selected based on patient care, a spokesman with the department said.

In addition, federal officials require state health inspectors to survey every dialysis center at least once every 3.5 years. The state also investigates complaints and entity-reported incidents related to the facilities.

“In the last three years, infection-related violations in dialysis centers have increased by 43 percent overall, and increased by 26 percent for violations cited during recertification surveys,” said California health officials.

Some of those citations included failure to wear gloves and hand-washing. In 2015, there were 35 violations noted for not keeping a sanitary environment. In 2017, the number of citations issued for similar violations grew to 51.

Fairbanks cautions against drawing quick conclusions on the number of citations issued for infection control violations, which are different than actual infections.

Fairbanks urges patients to refer to Medicare.gov to see how California dialysis centers rank and compare with others.

But the increasing citation numbers come as no surprise to Magellan Handford, a traveling dialysis nurse with 17 years of experience. Handford has worked in some 40 facilities from Los Angeles to San Diego, and has seen nurses overwhelmed with patients and duties as more facilities have opened.

“This has always been a phenomenon,” Handford said. “They [DeVita and Fresenius] don’t want to invest in workers, because they don’t want to lose profit.”

If the ballot initiative moves forward, Handford said it will shed more light on an industry he believes has operated with little oversight.

“As California goes, so goes the nation,” Handford said. “We hope this will spread throughout the nation and will give other workers the drive to make changes. We should be able to come do our jobs, take care of our patients, and not have to worry about an industry that is looking at profit.”